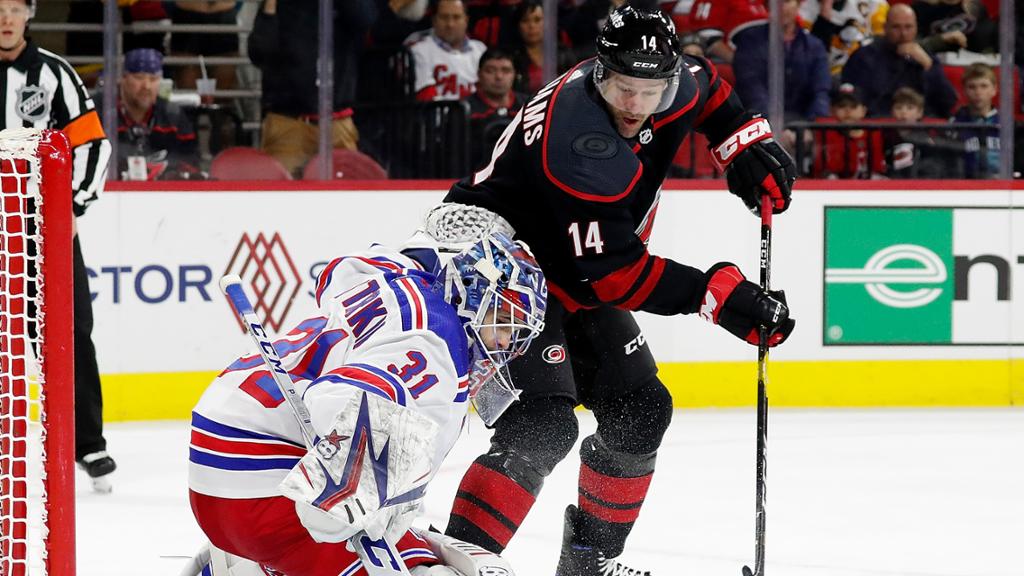 When the NHL resumes in August, eight qualifying series will begin but this match-up between the New York Rangers and Carolina Hurricanes is one of the more intriguing of the bunch.

While these teams are built differently, both rosters showcase a ton of young talent. This showdown will feature a Rangers team, which has had a ton of recent success, against the Hurricanes, who recently snapped a nine-year playoff drought. The teams will meet in a best-of-five Eastern Conference qualifier in Toronto.

These two Metropolitan division teams faced off four times during the regular season. The Rangers took all four by a combined score of 17-9.

They first met early in the November in Carolina. As was a common theme for the Rangers, they were heavily outshot, but capitalized on the scoring chances they had. Henrik Lundqvist stopped 45 of 47 shots while the Rangers cashed in on 15 of 18 shots against Carolina’s Petr Mrazek. Adam Fox added an empty net goal to secure a 5-2 victory.

The two teams met again later that month for a much more intense affair. The Rangers scored three goals in the first period. Carolina proceeded to dominate the rest that game, but its efforts fell short in a 3-2 loss. The Hurricanes once again dominated in the shots on goal category, but Lundqvist stood his ground.

The Rangers took the final two meetings by scores of 5-3 and 5-2. While their third meeting had a similar trend to the first two, the fourth match-up was more evenly played. In the final meeting, young Rangers’ phenom netminder Igor Shesterkin continued his hot start to his career with another victory.

The No. 11 seed Rangers are a team that revolves around Hart Trophy finalist Artemiy Panarin. Panarin averaged a goal every other game and an assist each night. Whenever he is on the ice, the team performance is elevated significantly.

Alongside Panarin on the first line, Mika Zibanejad certainly knows how to put the puck in the back of the net as well. Zibanejad was on pace to lead the NHL in goals had he played the entire season.

In the shadows, there are young forwards who are certainly capable of production, but serve as role players. Jesper Fast, Filip Chytil, and Kaapo Kakko all fall in that category. However, the return of Chris Kreider will certainly bolster the offense.

As far as defense goes, the Rangers struggle to make life easier for their goaltender. They were 30th in the NHL in shots on goal allowed per game with 34.

What their defensemen can do, though, is produce offensively. Jacob Trouba is likely their best overall defenseman. Behind him is rookie Adam Fox, who has a tremendous ability to patrol the ice and make the entry pass. Tony DeAngelo struggles at times, but is a good playmaker as well.

Goaltender is where the Rangers are the strongest. However, it is no longer Lundqvist between the pipes. When Shesterkin entered the NHL in the middle of the season, he lived up to his superstar hype that derived from his historic stats in the KHL in Russia. Although he only started 12 games, he had NHL-leading numbers with a .932 save percentage and a 2.52 goals against average.

On the other hand, the sixth-seeded Canes, although they have talented goal scorers, are strongest at the blue line. It all starts with Dougie Hamilton who was the top-graded right defenseman in the NHL this regular season, according to Daily Faceoff’s model.

Jaccob Slavin, Sami Vatanen, and former Ranger Brady Skjei are other key Hurricanes’ defensemen. The common traits that they all possess is not only size, but a ton of speed and agility. Those traits are crucial in the modern game.

Carolina also has a first line of superstar forwards in Sebastian Aho, Teuvo Teravainen, and Andrei Svechnikov. All three had over 60 points during the course of the Hurricanes’ 68 games. They also have Justin Williams, who would be on the first line of most NHL teams. Carolina’s depth at forward is not phenomenal, but it certainly has skaters that are capable of putting the puck in the back of the net.

On paper, the Hurricanes seem like the better overall team, but the Rangers have a significant advantage at the most crucial position: goaltender. Therefore, the Rangers will take the series in five.

In addition to Shesterkin, with whom the Rangers are 10-2 in games he starts, they are a completely different team with Kreider in the lineup. It allows New York to have two full lines of very capable forwards. Keep in mind that with all the rest the players have had in the last several months, the top players can be leaned on more heavily.

The playoffs are indeed a different game than the regular season in terms of how it is officiated. While this does not give them a significant advantage, it is still worth noting that the Rangers’ roster has more playoff experience.

It is very possible that the Hurricanes’ offense takes over, but with Shesterkin in net, the Rangers could stay in any game. With the Hurricanes’ goaltending struggles, the Blueshirts may be able to score the big goals when necessary.