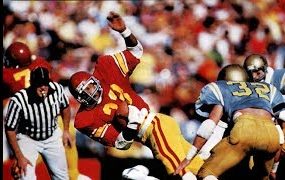 USC has more than double the number of football conference championships as UCLA since the teams joined the league that is now the Pac-12.

On this day 40 years ago however, it was the Trojans who played spoiler. With UCLA hoping to reach the Rose Bowl, USC rallied with 10 fourth-quarter points and blocked a field goal on the game’s final play to preserve a 22-21 win.

Both the Bruins and Trojans were ranked in the top 15 as they met at the Los Angeles Memorial Coliseum on Nov. 21, 1981. Much more however, was on the line for UCLA.

When the day was over, neither did UCLA.

Running back Kevin Nelson scored UCLA’s first touchdown of the day. USC running back and eventual Heisman Trophy winner Marcus Allen had a monster day for the Trojans, finishing with 219 yards on the ground. His second-quarter touchdown gave USC a 12-7 lead.

The next 14 points however, would belong to the Bruins.

UCLA pulled in front on a 22-yard touchdown pass from Tom Ramsey to Ricky Coffman. The two again hooked up for the 2-point conversion to make it 15-12.

Two field goals by Norm Johnson — one in the second quarter and another in the third — gave the Bruins a 21-12 lead entering the final quarter. In the final quarter, Steve Jordan’s third field goal of the day cut the deficit to six before Allen’s second touchdown with just over two minutes to play put the Trojans back in front, 22-21.

There however, was still time to reach field goal range and Dempsey would get the Bruins there. After hitting kicks in each of the previous two quarters, Johnson was called on to try a 46-yard kick.

Unfortunately for him, it never made it to the goalposts. Defensive tackle George Achica was able to break through and get a hand on Johnson’s kick. As time expired, the Trojans have overcome six turnovers to win by a single point.

Following the victory, USC would accept an invitation to the Fiesta Bowl where they would fall to Penn State, 26-10. The Trojans finished 9-3 and No. 14 in the final AP Poll.

UCLA’s loss would ultimately send Washington to Pasadena for the Rose Bowl. The Bruins settled for a date with Michigan in the Bluebonnet Bowl in which it was also easily defeated, 33-14. UCLA finished 7-4-1 and unranked.

Over his 20 years as head coach at UCLA, Terry Donahue would actually finish with a 10-9-1 record against the Trojans, which included three games decided by one point. The only one he lost cost him a Rose Bowl berth on this day four decades ago.