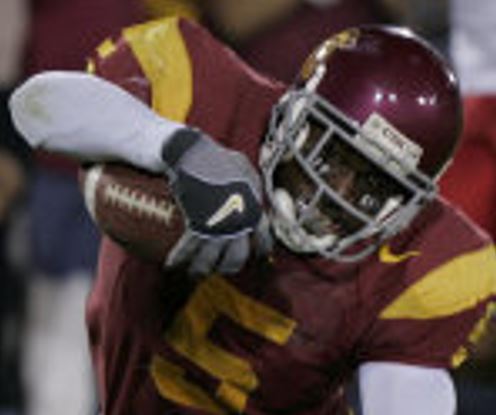 With the way the 2005 season ended, there was some doubt whether the right player won the Heisman Trophy.

On this day 15 years ago however, USC running back Reggie Bush essentially erased all doubt. In a match-up of top-20 teams, Bush just wouldn’t let the Trojans lose in a 50-42 shootout victory over Fresno State.

USC had won 32 games in a row as it arrived at the Los Angeles Coliseum on Nov. 19, 2005. The Trojans were 10-0, ranked No. 1 in the country and needing just two wins to get a shot at a national championship 3-peat.

As for Fresno State, it was 8-1 as it made its way to the Coliseum. The Bulldogs were ranked No. 16 in the polls and winners of seven straight.

Fresno State’s lone defeat was a 3-point loss at Oregon. Throughout the night, it gave USC all it wanted, but had no answer for Bush.

The first blow was delivered by Fresno State as the Bulldogs marched 81 yards in nine plays. Quarterback Paul Pinegar found Devyn Mcdonald for his first of four touchdown passes, but USC responded.

Thanks largely to a 65-yard run by Bush, the Trojans drew even before the midway point of the first quarter. LenDale White’s 5-yard run evened the contest, but by halftime, Fresno State was in control.

For the rest of the half, USC managed just two field goals. After Clifton Smith’s touchdown run, Pinegar found Jose Fernandez to give the Bulldogs a 21-13 halftime lead.

The second half was where Bush exploded. On USC’s second play from scrimmage, Bush broke a 35-yard run by to set up quarterback Matt Leinart’s short touchdown run. One play after USC’s Brandon Ting picked off Pinegar, Bush gave USC its first lead of the night. Bush’s first touchdown — a 45-yard scamper — gave the Trojans a 27-21 lead.

It looked as though they might run away with the contest.

Fresno State trailed 41-28 to start the fourth quarter, but refused to go quietly. Following Pinegar’s touchdown pass to Fernandez, Bush made his lone mistake of the night. The standout junior fumbled the ensuing kickoff.

Fresno State recovered and scored one play later on an 18-yard touchdown run by Wendell Mathis. With less than 10 minutes to go, USC trailed 42-41, but Bush would atone.

USC’s next drive started at its own 11-yard-line, but Bush made sure it didn’t stay there. Bush started the drive with runs of five and 20 yards before a 43-yard reception moved the ball inside the 25-yard-line of the Bulldogs. White capped the drive with a 2-yard touchdown run, but a failed 2-point conversion kept it a 5-point game.

A Pinegar fumble on the next drive set up the third field goal of the night by USC kicker Mario Danelo. With less than three minutes to go however, Fresno State was still alive.

Down eight and needing a touchdown and a 2-point conversion, Pinegar drove the Bulldogs to the USC 25. That was when Darnell Bing’s second interception of the night and the fourth thrown by Pinegar sealed the contest.

Pinegar passed for 317 yards for Fresno State, but the five turnovers proved costly. When all was said and done however, Reggie Bush owned the night.

The loss for Fresno State would begin a downward spiral. The Bulldogs lost their final four games, capped with a Liberty Bowl loss to Tulsa.

As for USC, it would clinch the Pac-10 a week later with a blowout victory over rival UCLA. The Trojans were unable to win a third straight national championship as they dropped a heartbreaker to No. 2 Texas in the Rose Bowl.

Bush would go on to easily win the Heisman Trophy. His best performance from a memorable season came on this day 15 years ago.