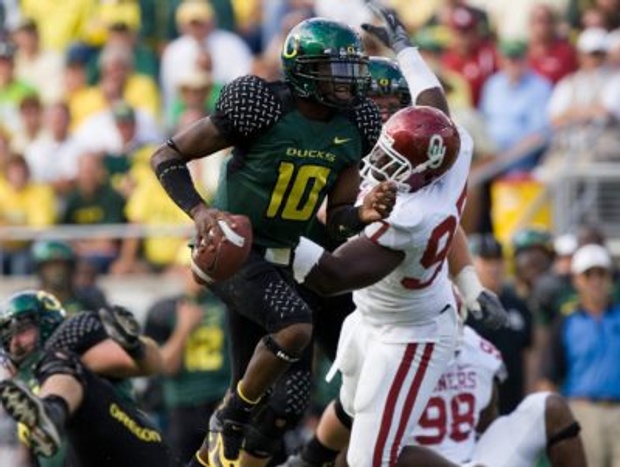 In seven meetings, Oregon has managed to beat Oklahoma just once. That one win however, was nothing short of exhilarating and it came on this day 15 years ago.

In front of a capacity crowd at Autzen Stadium, the Ducks sent the home crowd away happy. With the help of a controversial onside kick, two touchdowns in the final 72 seconds and a blocked field goal, Oregon slipped past the Sooners, 34-33.

Both teams were ranked in the top 20 as they met in Eugene on Sept. 16, 2006. The teams arrived for the contest with identical 2-0 records.

The 15th-ranked Sooners had began the year ranked 10th, but fell after a sub-par showing in the opener against UAB. Oregon had moved up three spots to No. 18 after a blowout of Stanford and a 31-24 victory at Fresno State.

A run of 13 straight points in the fourth quarter for Oklahoma looked as it though it would ultimately be enough to propel the Sooners to victory. Oregon quarterback Dennis Dixon’s 16-yard rushing touchdown with 1:12 to play cut the Oklahoma lead to 33-27, but it appeared to be a case of too little, too late…until it wasn’t.

Down six, Oregon would get the ball back after orchestrating a successful onside kick. The question was whether or not it should have.

As kicker Luke Bellotti, the son of Oregon head coach Mike Bellotti, put the short kick on the ground, it came close to being touched by an Oregon player, which would have resulted in a penalty. Officials and replay review determined that no infraction took place and the Ducks were awarded the football.

With the ball at its own 47-yard-line, it took Oregon just three plays to find the end zone. After Dixon connected with running back Jonathan Stewart for 16 yards inside the Oklahoma 40, a pass interference call moved the ball inside the 25. With 46 seconds to go, Dixon delivered a 23-yard touchdown strike to Brian Paysinger.

With the extra point, the Ducks had turned a 13-point deficit into a 34-33 lead in just 26 seconds. Oklahoma however, wasn’t done.

Reggie Smith returned the ensuing Oregon kickoff for 55 yards to the Ducks’ 27-yard-line. With the clock ticking under 30 seconds, the Sooners gave the ball to Adrian Peterson, who rushed for 211 yards on the day. Unfortunately for Peterson, he was stopped for no gain and quarterback Paul Thompson was forced to spike the football and stop the clock with just two seconds remaining.

That brought on kicker Garrett Hartley. Hartley was 4-for-4 on the day as he came on to try a 44-yard attempt for the win. Hartley’s kick was blocked at the line of scrimmage and the Ducks escaped with a thrilling 1-point victory.

The teams each kicked two field goals in the first half, but combined for just one touchdown. That came on a 3-yard run from Stewart, who finished with 144 yards rushing, less than two minutes in.

Oregon led 13-6 at the break, but the next 27 minutes of football action would be dominated by Oklahoma. Thompson scored from a yard out to tie the game for the Sooners before finding Malcolm Kelly for a 31-yard touchdown and Oklahoma’s first lead, 20-13.

Dixon’s 30-yard touchdown pass to Jaison Williams just seconds into the fourth quarter tied the game at 20, but it took Oklahoma just two and a half minutes to respond. Peterson’s 17-yard touchdown put the Sooners back in front, 27-20.

Oklahoma would sniff the end zone twice more, but was unable to put the game away as it settled for a pair of short Hartley field goals in the final quarter. That would prove costly.

Dixon finished with 341 yards passing to go with his three total touchdowns in the victory. Williams led all receivers with nine catches for 177 yards. Dixon was intercepted twice in the victory — both times by Nic Harris.

Oklahoma would bounce back from the loss to have a championship season. The Sooners shook off a loss to Texas three weeks later to win their final seven regular season games. Oklahoma beat Nebraska 21-7 in the Big 12 Championship before closing the season with another 1-point loss — a 43-42 overtime defeat against Boise State in the Fiesta Bowl.

Oregon would beat Arizona State two weeks later and ascend to No. 11 in the polls, but that would be the highest that the Ducks would get. Oregon closed the year by losing six of its final nine games to finish 7-6. Its most impressive victory of the season and only win over a ranked team came on this day 15 years ago.