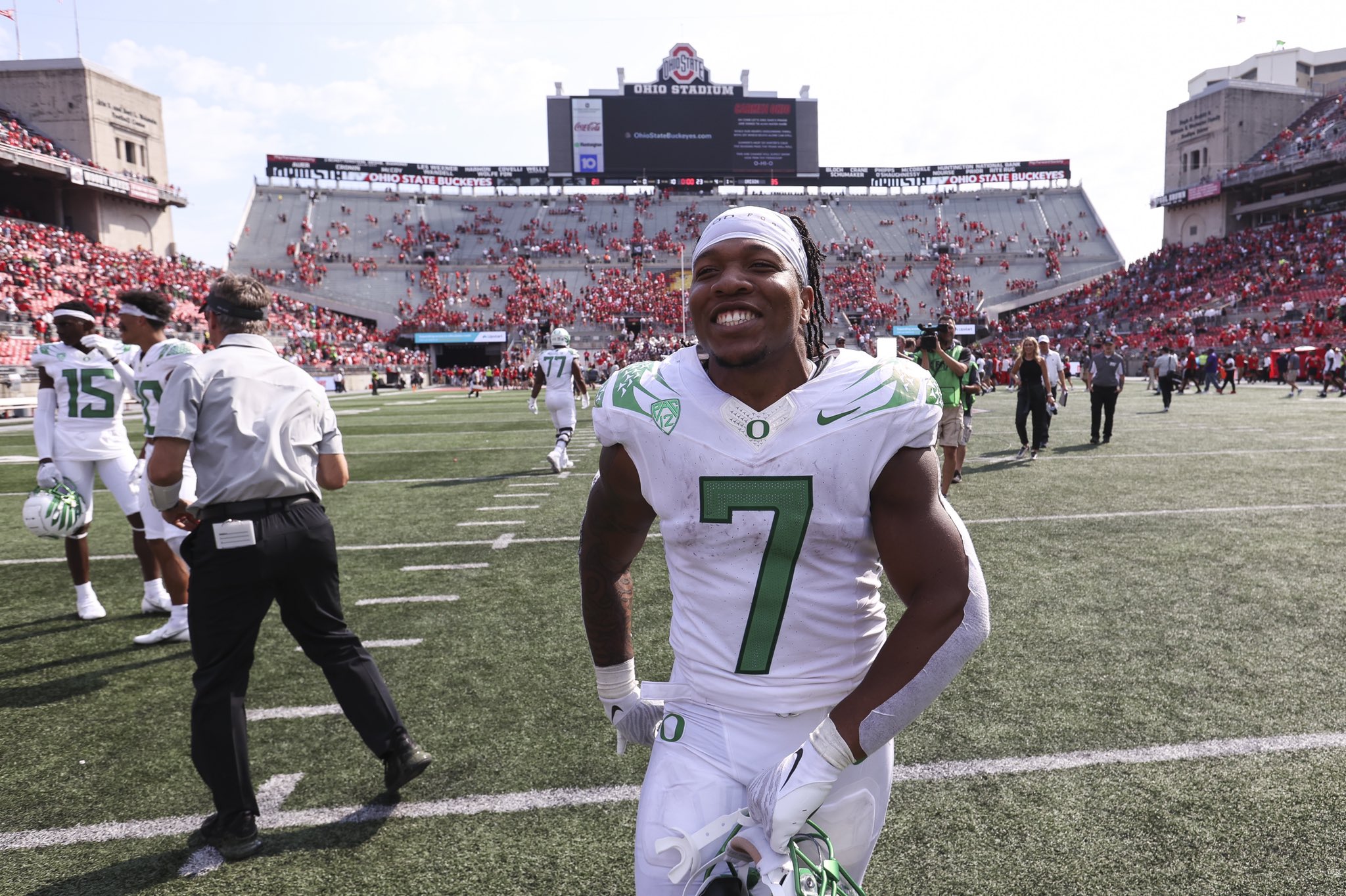 It’s a new season and we’ve got a new series. This week, we’ll be looking back on the nation’s top five performers.

Moral of the story for Week 2……the SEC is king. It’s that simple.

College football creates the most insane GIFS. I don’t know how you top the yin/yang of this: pic.twitter.com/CZxn7QTcBp

If you wanted to describe being at an all-time low, one may lead you in the direction to Waterbury, Conn. After postponing its season a year ago due to the COVID-19 pandemic, Connecticut began its 2021 season in Fresno, Cal., where it was beaten down 45-0 in 117-degree heat. After then returning home to a “friendly” environment, UConn was defeated yet again — this time to the FCS foe, Holy Cross.

Fast forward a week later, and Huskies’ head coach, Randy Edsall, announces that he will be leaving the program, effective immediately. And that all leads us to this Saturday, where the Boilermakers of Purdue galloped into Waterbury and beat the Huskies by the score of 49-0.

David Bell evades the entire defense to put more points on the board for @BoilerFootball . pic.twitter.com/ogBB3TeTqo

Is it OK to kick a man while he is down? Maybe, maybe not. Whatever the case may be, that is exactly what junior wide receiver David Bell did during Saturday afternoon’s bloody massacre. Bell, a native of Indianapolis, was stronger, faster and more athletic than any corner the Huskies tried to throw at him. Having his way throughout the contest, the 6-foot-2 playmaker racked up 134 yards on eight catches, to go along with three touchdown catches.

As North Carolina’s Sam Howell made his way back to the locker room in Blacksburg a week ago, many scratched their heads as to what just took place. The Tar Heels, who had entered the season as the 10th-ranked team in the country, had just been dominated by Virginia Tech by the score of 17-10. Probably the most surprising part of the night was that Howell, who had gotten serious Heisman Trophy praise coming into the year, looked like he had just gotten off of the bus of a JV tryout.

Howell, who has thrown for over 7,000 yards during his first two years in Chapel Hill, looked extremely out of sorts, going 17-for-32 with 208 passing yards, a touchdown pass and three interceptions. And while the panic button shouldn’t be hit just yet, some may begin to wonder if the stage has become too bright for the small-town quarterback.

Antoine Green dives in for the 57-yard TD 🙌 @UNCFootball pic.twitter.com/wjQJSsvARI

On Saturday, Howell got the ultimate handout by following a bad road performance with a home game vs. St. Mary’s Sisterhood of the Travelling Pants — or Georgia State — but what we saw out of the junior was much needed.

In a 59-17 blowout win, Howell showed much of America why he is deserving of such high praise, going 21-for-29 passing with 352 yards, three touchdown tosses, 104 rushing yards and two more scores on the ground.

When Howell is locked in, there may not be a more talented, more explosive signal caller in America. With that being said, only time will tell as to just how often we will see this version of North Carolina’s stud.

There is an old saying that goes, “Nothing is more healthy than a good, old-fashioned quarterback competition.” And while no one actually says that, that doesn’t mean that it’s not true.

And as we now make our way to Gainesville, Dan Mullen has the difficult decision: Stick with his Week 1 starter Emory Jones or hand the reigns to his new, shiny, athletic toy, Antony Richardson. Decisions, decisions.

Jones has quite the upside and was part of Florida’s success last season, but the decision here is pretty clear. Richardson is the future of Florida football. What we have seen from the dual-threat from Gainesville in just two games is far and away more exceptional than anything Jones has or will accomplish during his time on campus. That may be harsh, but it’s the truth.

After rushing for 160 yards a week ago vs. Florida Atlantic, the explosive Floridian dialed it up one more notch. Richardson threw for 152 yards on three pass attempts. Like that yards per attempt average? Check out this one: he added 115 rushing yards on four carries and three total touchdown. You want to talk about explosiveness.

If Mullen is smart, Jones will take very few snaps for the rest of the season. The Gators welcome in No. 1 Alabama this Saturday and if Florida has any chance of pulling off the stunner, Richardson is going to have to be the man in charge.

Is Michigan back? It is way too soon to tell. Through two games however, Michigan seemed to have a renewed energy. And who knows? This could even be the team that cools off head coach Jim Harbaugh’s seat and saves the former quarterback’s reputation forever.

On Saturday, in front of a packed Michigan Stadium, the Wolverines demolished Washington by the score of 31-10. And during that game, the men dressed in maize and blue did what so many teams have a hard time doing in today’s game: establish an old-school, ground-and-pound rushing attack.

Michigan compiled a total of 343 rushing yards. That included a 171-yard, 3-touchdown performance from sophomore back Blake Corum and a 155-yard display by senior Hassan Haskins. Haskins also rushed for a touchdown. Additionally, the Wolverines rushed the ball a total of 56 times and averaged more than six yards per carry. Dominance is a 9-letter word.

As the Oregon Ducks made their way into Columbus on Saturday afternoon, few were giving them much of a shot. But that is why you play the game. Led by head coach Mario Cristobal and a ferocious rushing attack, Oregon went into the house that Woody Hayes built and shocked the No. 3 Ohio State Buckeyes by the score of 35-28. “Quack, Quack, Quack, Quack Quack!”

Speaking of rushing attacks, let’s acknowledge the dominant day that the small, but mighty man from Chula Vista had on Saturday afternoon. CJ Verdell may be the most underrated running back in the nation. Playing in the Pac-12, you have to do something exceptional to get your name printed on the national headlines.

The SEC, ACC and Big Ten are always going to get that media spotlight. As for the Pac 12 — let’s just say it’s kind of like that little brother who is always fighting to get attention. Verdell won his team and conference some much-deserved attention.

THERE GOES THAT MAN, @Cjverdell_ 🤯

The @oregonfootball star breaks free for his 3rd TD run of the game! pic.twitter.com/8iJrK4pa4V

On 20 carries, the 5-foot-8 downhill rusher compiled a total of 161 yards. He accounted for three touchdowns as well — two rushing and one receiving. Seizing the moment is an act that should always be praised.