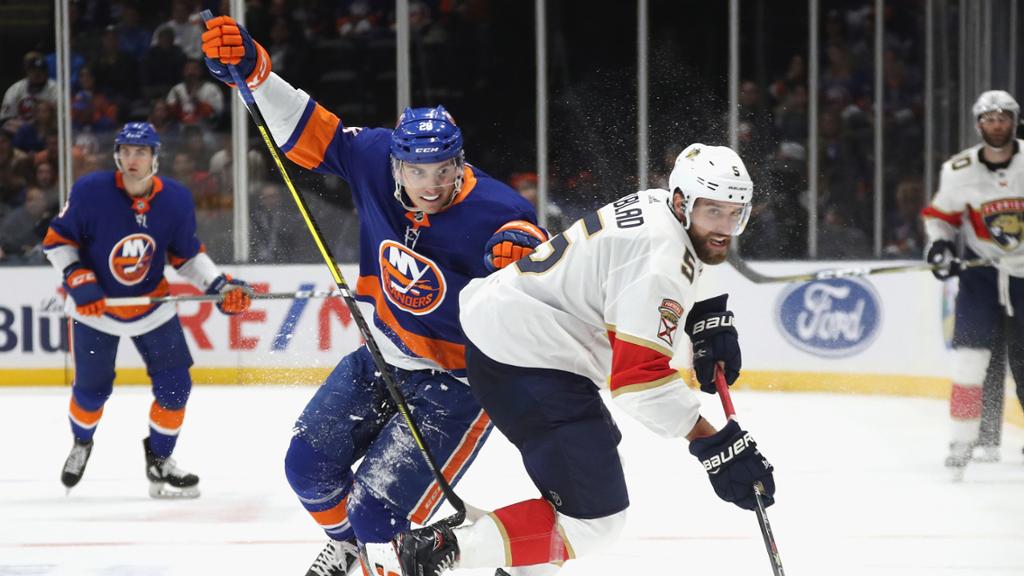 Although the New York Islanders won all three regular-season match-ups against the Florida Panthers, the season series was closer than you’d imagine. Two of the three match-ups were one-goal games, including a shootout win for the Islanders on Oct. 12.

In the said shootout victory, Anders Lee and Josh Bailey scored the regulation goals for the Islanders. Dennis Malgin, now a member of Toronto, and Evgeni Dadonov scored for the Panthers. Brock Nelson scored the lone goal in the shootout, while goaltender Semyon Varlamov held down the fort for New York.

During their second meeting on Nov. 9, Mathew Barzal opened up the scoring in the first period. Aleksander Barkov tied it up in the third period, but Scott Mayfield tied it up less than 40 seconds later. That lifted the Islanders to a 2-1 victory backstopped by 37 saves from Thomas Greiss.

In their final match-up of the season, the Islanders took a 3-1 victory on Dec. 12. After a scoreless first period, Devon Toews opened up the scoring for the Islanders just 49 seconds into the second period. Barzal struck four minutes later to make it a 2-0 lead.

Mike Hoffman would make it 2-1 halfway through the second period, but it wasn’t enough. Anders Lee buried an empty-net goal to make it a 3-1 game with three seconds left in the third.

In these match-ups, the Islanders were able to hold the Panthers’ potent offensive attack to one goal in two of the three contests. Each game has been low-scoring on both sides however. Excluding empty-netters and shootouts, neither team has been able to score more than two goals in any contest.

With that being said, let’s introduce our contenders:

At 35-23-10, the seventh-seeded Islanders are one of those gritty defensive teams. Their one flaw is goal-scoring. While they have allowed the fifth-least amount of goals in the NHL with 190, they rank in the bottom half of the league in goals for with 189.

However, some of these team stats come with a grain of salt. The Islanders went on a massive cold streak during the second half of the season after losing players like Adam Pelech, Casey Cizikas, and Johnny Boychuk for a significant period of time. All three will be back for this series.

The Islanders also added Jean-Gabriel Pageau at the trade deadline. Pageau had 24 goals and 40 points in 60 games for the Ottawa Senators before adding two more goals after arriving on Long Island.

On defense, the Islanders are led by Ryan Pulock, who tallied 10 goals and 35 points while playing in all 68 games. Devon Toews added six goals and 28 points of his own, while Adam Pelech, Scott Mayfield, and Johnny Boychuk have each contributed to keeping the Islanders afloat on the defensive end.

In net, the New York Islanders have a tandem of Varlamov and Thomas Greiss. With both goaltenders having solid seasons, the Islanders will be using training camp to dictate who will get the start in net for this qualifying round series.

The 35-26-8 Florida Panthers were on the opposite side of the spectrum, scoring the sixth-most goals in the NHL with 228. The No. 10 seed Panthers also allowed the sixth-most with 224. As for special teams, the Panthers had the 10th-best power play (78.5 percent) in the NHL.

The Panthers’ potent offensive attack has been led by Jonathan Huberdeau, who scored 23 goals and 78 points in Florida’s 69 games this season. He is one-half of the Panthers’ two-headed superstar monster with Aleksander Barkov. The Panthers’ captain netted 20 goals and added 62 points in 66 games.

Mike Hoffman also added 29 goals and 59 points of his own, while Evgeni Dadonov added another 25 goals and 47 points. Frank Vatrano, Brett Connolly, and Noel Acciari also add depth to the Panthers’ scoring attack.

On defense, the Panthers have the two-headed monster of Keith Yandle and Aaron Ekblad. Yandle scored five goals and had 45 points while Ekblad added five goals and 41 points. Ekblad was one of the Cats’ lone reliable defenders.

MacKenzie Weegar is solid defensively, but players like Mike Matheson and Anton Stralman have been major question marks for the Panthers this season. Yandle has had his own defensive woes. If they don’t improve their play in the qualifier, the Islanders could easily exploit that weakness.

In goal, the Panthers have perennial superstar Sergei Bobrovsky. ‘Officer Bob’ had a rough season in 2019-20, posting a 23-19-6 record with a measly 3.23 goals-against average and a .900 save percentage.

Although he had an off-year, look out for Bobrovsky to rebound following the four-month break. Bobrovsky could possibly steal a few games for the Panthers if he returns to form.

This is going to be a very good five-game series. These teams both match up fairly evenly. Ultimately, the series will go the distance with the Islanders winning in five.

The Islanders come into the qualifier at full strength. With Adam Pelech back in the lineup, the Islanders are in great shape. The Isles were 25-10-3 before losing their defensive anchor. They’ve gone 10-13-7 since his departure from the lineup.

The Panthers’ defense also has way too many question marks. In a playoff setting, the Islanders can certainly take advantage of the holes their defense presents while holding the Panthers’ offensive attack at bay.

Ultimately, the two biggest questions of this series are: Which version of Sergei Bobrovsky are the Panthers getting? Will Mathew Barzal take over this series?

If the Panthers get a hot Bobrovsky, they could steal this series. If he’s not on and Barzal takes over, the Islanders could win this series pretty easily.