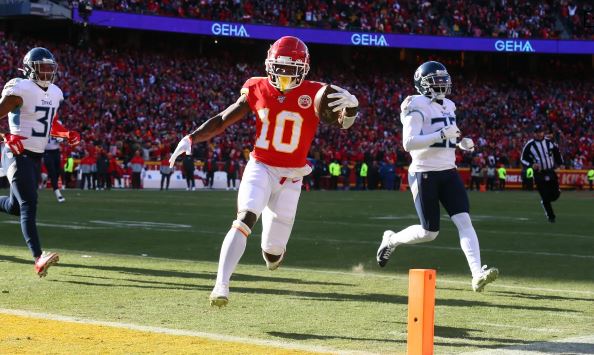 It wasn’t long ago that many considered the Tampa Bay Buccaneers the best team in football.

Since then, the Buccaneers have dropped two of three games — both prime time match-ups — and at 7-4, are now considered long shots in the NFC South. Things get no easier this week as the reigning champion Kansas City Chiefs come to Raymond James Stadium.

Led by an aerial attack that includes quarterback Patrick Mahomes, wide receiver Tyreek Hill and tight end Travis Kelce, the Chiefs lead the NFL in scoring offense and rank second in total offense. At 9-1, Kansas City has won five games in a row. It should be noted that the last two were by just six total points.

In the last two losses for Tampa Bay, quarterback Tom Brady has thrown two touchdowns and five interceptions. For the season, Brady ranks in the top five in the NFL in passing yards and touchdown passes. Like the Chiefs, the Buccaneers are extremely talented at the skill positions with running back Ronald Jones, wide receivers Chris Godwin, Mike Evans, Antonio Brown and tight end Rob Gronkowski.

The contest ultimately may come down to defense. Tampa Bay ranks in the top five in the NFL in total defense, but the Chiefs actually allow fewer points. Shaquille Barrett headlines the defense for Tampa Bay, but linebacker Devin White ranks second in the league in tackles.

Carlton Davis ranks third in the NFL in interceptions with four. With three interceptions and two forced fumbles, safety Daniel Sorensen is a player to watch for the Chiefs. He also leads Kansas City with 61 total tackles.

In head-to-head match-ups, Brady is 2-1 against Mahomes with the most notable being the AFC Championship two years when the now 43-year-old was a member of the New England Patriots. Sunday’s contest begins at 4:25 p.m. and airs regionally on CBS.

UCF (5-3) at South Florida (1-7)
Friday, Nov. 27 at 3:30 p.m. ET (ESPN)
UCF has won the last three meetings against South Florida and by an average margin of 31 points per game. Since winning the opener, USF has lost seven straight games. The Bulls are the only American Athletic Conference team without a win in conference play.
Prediction: UCF 55, South Florida 20

Kentucky (3-5) at No. 6 Florida (6-1)
Saturday, Nov. 28 at 12 p.m. ET (ESPN)
Florida quarterback Kyle Trask has thrown for 31 touchdowns — an SEC record through seven games. This week, he’ll get tight end Kyle Pitts back. Kentucky snapped a 31-game losing streak to Florida in its last trip to Gainesville.
Prediction: Florida 41, Kentucky 17

Miami Dolphins (6-4) at New York Jets (0-10)
Sunday, Nov. 29 at 1 p.m. ET (CBS)
After five straight wins, the Miami Dolphins are coming off a disappointing loss to the Denver Broncos. Miami shut out the New York Jets 24-0 when the teams met in Miami. Led by former Dolphins’ head coach Adam Gase, the Jets are the only winless team in the NFL.
Prediction: Miami 27, N.Y. Jets 17