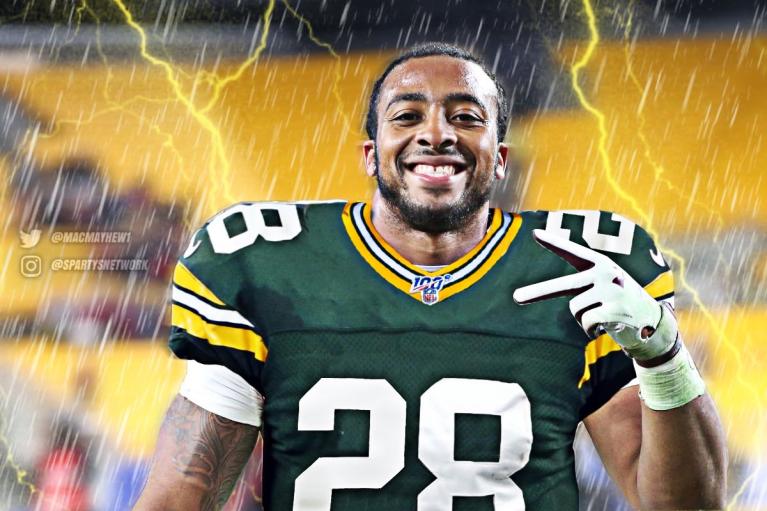 The Green Bay Packers are leading the visiting Minnesota Vikings 24-21 with 1:47 left in the fourth quarter. Aaron Jones has already rushed for 112 yards and a touchdown, and added a receiving touchdown on top of that. But now, it’s A.J. Dillon time.

The rookie running back out of Boston College has been one of the best change-of-pace backs in the league this season. But that was just a warm-up. He was drafted for moments like this.

A First Down Ends It

The Vikings’ defense is cold and tired from chasing down Jones all night. And now, they have to keep Green Bay’s 6-foot-0, 247-pound bruiser of a back from picking up the first down. Minnesota is out of timeouts and has no way to stop the clock.

The Packers break the huddle; their green and gold are moving down the snow-covered field. 22 plumes of breath are shooting rhythmically out from behind the facemasks of the players like the geysers of the Pacific Northwest.

Davante Adams runs out wide and checks with the referee. The offensive line cements themselves into their three-point stances. Their knuckles are white, they’re coming. Quarterback Aaron Rodgers walks up to the line, surveying the defense as he walks. He looks back toward Dillon before crouching down to receive the snap from the center.

The right side of the line fires off the ball, putting bodies on defenders. Josiah Deguara comes across to seal off the outside linebacker. Rodgers spins left with the ball and tosses it right, into the waiting arms of Boston College’s career leader in touchdowns and all-purpose yards. Dillon sprints outside with 4.53 speed, gaining momentum with every step. A man in a purple helmet rushes up to meet him. Dillon adjusts course to meet him head on; he loves contact.

The Vikings’ safety’s helmet bounces off Dillon’s shoulder pads like it had rammed a trampoline. His feet have now replaced his head in space. Dillon’s rumbling. He kicks it inside, across the “G” that adorns at midfield.

One defender runs up and meets him. That’s not enough. Another defender comes. Dillon slows down. Finally a third defender jumps on his back, sending Dillon and his three passengers to the ground. The ball comes to rest tucked under Dillon’s arm — 11 yards forward of the original line of scrimmage.

By the time, the two sides line up for the next play, there’s only 58 seconds remaining in the game. Rodgers takes a knee. Time keeps running out on Minnesota’s 2020 season. There’s too much time left. Green Bay has to run one more play to avoid a delay of game penalty. Rodgers calls a timeout.

Everyone wonders what he’s doing, including the coaches. He motions toward the sideline; the offense and coaching staff meet near the edge of the field. Rodgers takes off his helmet and starts to fire up the home crowd. Timeout’s over. Rodgers still has his helmet off. He’s taken himself out of the game for the final play in place of rookie quarterback Jordan Love.

Rodgers and Love share a tremendous relationship; everyone knows that. Rodgers wants Love to experience this moment. Love takes the snap and kneels down to end the game. Teams meet at midfield to shake hands. The fans throw snow as high in the air as humanly possible and erupt like they haven’t done since 2011.

The Packers do a victory lap around Lambeau Field, slapping hands with every fan within reach. A mobile stage is rolled out onto the field where the Packers surround NFL Commissioner Roger Goodell. Goodell congratulates the Packers and their fans on a great season. He then wishes them good luck in the upcoming Super Bowl before presenting them with the George Halas Trophy. Another eruption from the crowd…

A Plan Comes Together

Few fans envisioned this possibility on that Friday night in April 2020 when the Packers selected Dillon with their second-round draft pick. Everyone knew they were going to grab a wide receiver for Rodgers to throw to. But general manager Brian Gutekunst had a plan.

Gutekunst’s plan was to draft the powerful junior out of Boston College who ran a 4.53-second 40-yard dash along and showed a 41-inch vertical leap. For comparison’s sake: Dillon is the exact same weight as Derrick Henry, but three inches shorter. Compared to former Packers running back Eddie Lacy, Dillon is one inch taller and only six pounds Lacy’s junior.

His decorated career in Chestnut Hill may lead many to forget that Dillon was originally committed to Michigan to play linebacker. He ultimately flipped his commitment to Boston College as a running back.

I think it’s safe to say he made the right decision. And fans of the 2020 Green Bay Packers thank him for that.