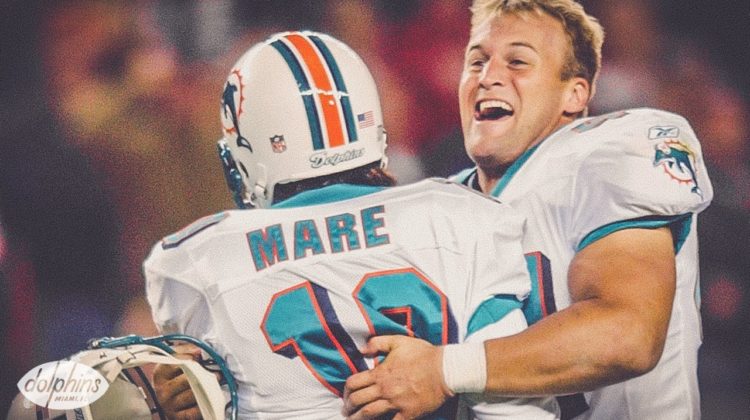 Over his 10 years with the franchise, kicker Olindo Mare scored more points than any other Miami Dolphins player ever.

A Pro Bowl selection in 1999, Mare hit plenty of big kicks during his time with the Dolphins. One of those came on this day 20 years ago.

In a prime time matchup, Mare connected from 53 yards in the game’s final seconds to lift the Dolphins past the Denver Broncos, 24-22.

It had the makings of a marquee matchup as the Dolphins and Broncos both arrived at Invesco Field at Mile High on Oct. 13, 2002, with 4-1 records. The Sunday night showdown would end up being a back-and-forth contest.

In just a matter of seconds, things went from jubilation to agony and vice versa. Ultimately, the Dolphins left with a thrilling victory.

Through three quarters, all Denver managed was four Jason Elam field goals, but that was enough for the lead. The Broncos took a 12-7 lead to the final period, but that was short-lived.

Ricky Williams’ second touchdown run of the night gave Miami a 14-12 lead with 11:30 left. About three minutes later, the Dolphins extended the lead to nine when Patrick Surtain returned a Brian Griese interception 40 yards for a score.

Up 21-12, the Dolphins seemed in control, but Griese, who finished with 335 yards passing, would atone. With five minutes left, his short touchdown toss to Mike Anderson capped an 11-play, 80-yard drive and cut the Miami lead to two. A 30-yard completion to Ashley Lelie on the next drive put Denver in field goal range.

It looked as though Elam would be the hero. With 45 seconds left, Elam connected on his fifth field goal of the night — a 55-yard make — to put Denver back in front, 22-21.

Fortunately for Miami, there was time — and some luck.

Facing 3rd-and-10 from his own 26-yard-line, Dolphins quarterback Jay Fiedler was able to find Randy McMichael for 17 yards and a first down. On the next play, Denver linebacker John Mobley appeared to have the game-clinching interception in his grasp, but it went through his hands and to Miami’s Dedric Ward for 22 yards and a first down.

Miami used its last timeout with 11 seconds left. Mare came on to try a 53-yard field goal to put the Dolphins back in front.

His kick left no doubt.

With plenty of distance and six seconds to spare, Mare split the uprights. Despite being outgained 410-259 in total yardage, the Dolphins left Denver victorious.

The Dolphins were riding high at Mile High, but responded with three straight losses. Miami dropped six of its final 10 games to finish 9-7 and miss the playoffs.

Denver also struggled to close the season, dropping five of its final eight games to also finish 9-7. The closest game played by either team that year was decided by a 53-yard Mare field goal and on this day two decades ago.