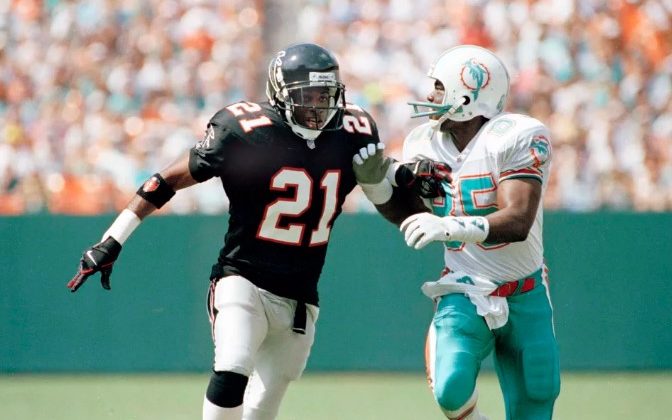 The 1992 season was one to remember for the Miami Dolphins. Miami finished with the best record in the AFC and reached the AFC Championship.

A big part of the Dolphins’ success that season was their strong start and ability to come through in the clutch. That’s what they did on this day 30 years ago. Mark Higgs’ late touchdown was ultimately the difference as Miami rallied from 10 points down to top the Atlanta Falcons, 21-17.

The Dolphins were a perfect 4-0 as they arrived at Joe Robbie Stadium on Oct. 11, 1992. Miami had already made fourth-quarter rallies to beat the Cleveland Browns and Seattle Seahawks.

At 2-3, Atlanta was looking to even its record. For a decent portion of the day, it appeared as though the Falcons would do just that.

Miami Rallies and Holds On

Higgs scored the game’s first touchdown to give the Dolphins an early 7-0 lead, but Atlanta bounced back with 17 straight points. On a day where he passed for 254 yards, Falcons quarterback Chris Miller threw touchdowns to Mike Pritchard and Andre Rison to give his team a 2-score lead, but a third-quarter turnover would swing momentum back to the Dolphins.

With four minutes left in the third quarter, Vestee Jackson picked off Miller and returned it 30 yards for a score to cut the lead to three. After being stifled for two and a half quarters, the Dolphins mounted a drive when it mattered most.

After a 46-yard completion from Dan Marino to Tony Martin put Miami in the red zone, a third-down conversion pass from Marino to Mark Clayton put it on the goal line. With 5:01 left, Higgs bounced to the outside and into the end zone.

Down 21-17, the Falcons refused to go quietly. Atlanta used a pair of third-down conversions to march to the Miami 12-yard-line. After misfiring for Pritchard on third down, a stumbling Miller tried to shovel one to running back Keith Jones on 4th-and-7. The flip went off Jones’ hands and to the grass as the Dolphins took over on downs with 43 seconds remaining.

Marino passed for 250 yards in the win. Higgs led all rushers with 58 yards. Rison was the game’s top receiver with seven catches for 101 yards in the loss.

The Dolphins, on the other hand, started 6-0 during what would be an 11-5 season. Six of Miami’s 11 wins that season required a fourth-quarter comeback. The third and first at home came on this day three decades ago.