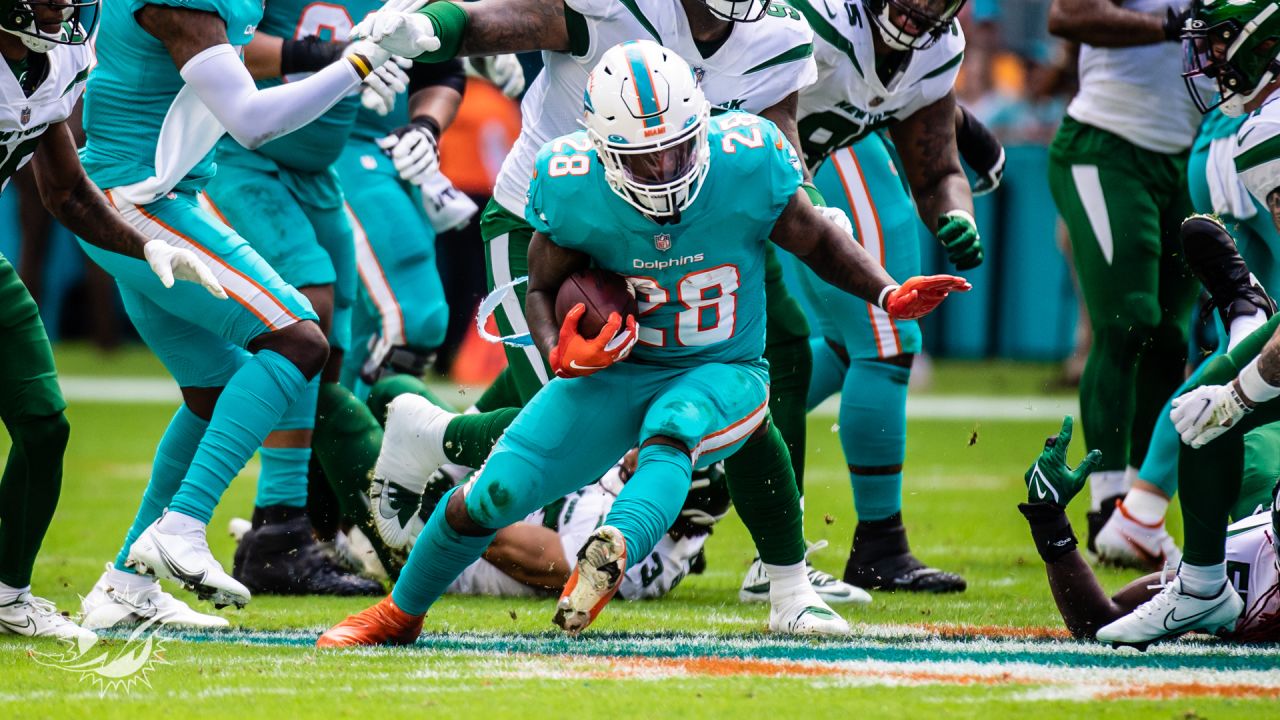 It would have been hard to fathom on Halloween, but with three weeks left in the 2021 regular season, the Miami Dolphins are 7-7 and in the thick of the AFC playoff chase.

Before that happens, here are five “Fin”teresting facts from Sunday’s win over the Jets:

1. The Duke of Miami

The Miami Dolphins have hardly had a potent rushing attack this season, but that was not the case on Sunday. A big reason for that? Running back Duke Johnson. In the 31-24 win, Johnson rushed for 107 yards and two touchdowns on just 22 carries. In the process, Johnson became the first Miami rusher to eclipse the century mark since Salvon Ahmen rushed for 122 yards in last season’s 22-12 win over the New England Patriots.

As a team, the Dolphins rushed for a season-high 183 yards. While Johnson was picking up the tough yards, Myles Gaskin had the longest run of the season for Miami, going 30 yards. Prior to Sunday’s contest, Johnson had carried the ball just four times all season.

Entering Sunday’s game, the Dolphins had not allowed a non-offensive touchdown all season long. With Miami leading 24-17 in the fourth quarter, an ill-advised throw from Tagovailoa was intercepted by Jets’ rookie Brandin Echols and returned 20 yards for a touchdown to tie the game.

It was the first non-offensive score allowed by the Dolphins since last season’s finale when Josh Norman returned a Tagovailoa pick for a score in Miami’s 56-26 loss to the Buffalo Bills. On Sunday, Tagovailoa atoned by leading his team on the game-winning 9-play, 75-yard touchdown drive following the pick.

With Sunday’s victory, the Miami Dolphins have now won six straight games. That is the longest streak for the Dolphins in 16 years. After a 3-7 start to the 2005 campaign, Miami won its final six games to finish 9-7 in its first season under head coach Nick Saban.

Fittingly, on a day where the Dolphins won their sixth straight game, they also set a new season-high with six sacks. Linebacker Jerome Baker led the way with two sacks of New York rookie quarterback Zach Wilson. Also recording sacks on Sunday for the Dolphins were Emmanuel Ogbah, Zach Sieler, Andrew Van Ginkel and Brandon Jones. The previous season-high for the Dolphins in terms of sacks was five against the Carolina Panthers to close November.

The Miami Dolphins won their sixth straight game on Sunday, but things didn’t go well early on. Miami trailed 10-0 and 17-7 in the first half before rallying. The 10-point deficit was the largest overcome for the Dolphins this season and the biggest in any victory since topping the Philadelphia Eagles 37-31 on Dec. 1, 2019. Prior to Sunday, Miami had not trailed by more than three points in any win this season.