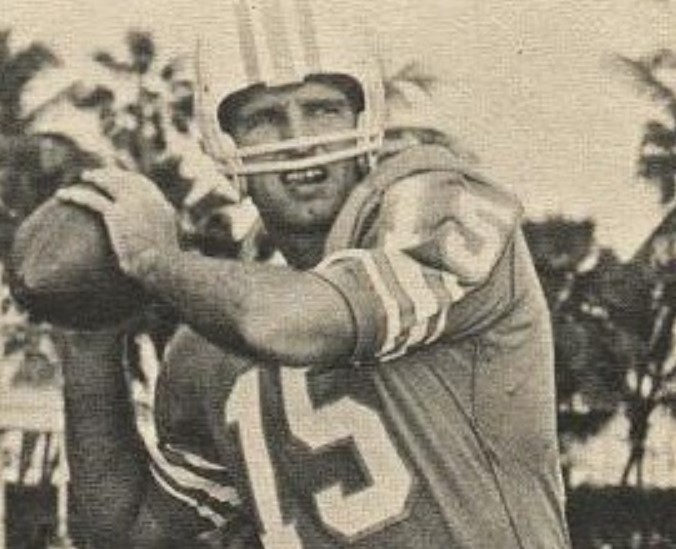 Photo courtesy of Remember the AFL

For the Miami Dolphins, the first season as a franchise wasn’t one to remember fondly.

It however, did end on a high note and on this day 55 years ago. Miami capped the season by rallying with two fourth-quarter touchdowns for a thrilling 29-28 victory over the Houston Oilers.

It was a matchup of the AFL’s two worst teams at the Orange Bowl on Dec. 18, 1966. The Dolphins were just 2-11, but had defeated the Oilers earlier in the season for their only road win.

Houston actually started the year 3-3, but was riding a 7-game losing streak entering the final week of the season. More than midway through the final quarter, it looked as though Houston would end the year on a high note.

After passing for three touchdowns earlier in the game, Houston quarterback Don Trull’s 1-yard touchdown run with less than seven minutes to play appeared to be the final nail in the Miami coffin. His fourth total touchdown had given the Oilers a 28-15 lead and seemingly sealed the win.

A good kick return however, jumpstarted the Miami offense. Behind the arm of quarterback John Stofa, the Dolphins marched 64 yards in 11 plays. Stofa completed four passes on the drive and added a 14-yard run. His 4-yard touchdown strike to Bill Cronin cut the lead to six and there was still time with 3:17 remaining.

The Miami defense forced a quick 3-and-out before taking over at its own 45-yard-line with less than two minutes to play. A 22-yard strike to Cookie Gilchrist put the Dolphins in Houston territory, but back-to-back plays for losses seemed to put the Dolphins in an unwinnable position.

Facing 3rd-and-24 from the Houston 47, Stofa stood in and delivered a strike to Frank Jackson for 33 yards and a first down. On the very next play, Stofa hit Joe Auer, who found the end zone from 14 yards out. With 33 seconds left, Gene Mingo’s extra point gave Miami its first lead and the eventual victory.

The Oilers raced to a 14-0 lead, thanks to touchdown tosses from Trull to Hoyle Granger and Larry Elkins. Miami got on the board on the first touchdown connection from Stofa to Auer — this one for 27 yards. A successful fake field goal resulted in two points to cut the lead to 14-8.

Just nine seconds remained in the first half when Trull hit Bob McLeod for the Oilers’ third touchdown. Stofa’s 48-yard touchdown pass to Jackson served as the only points of the third quarter and cut the Houston lead to 21-15.

Miami finished with a then-franchise record 417 yards in the victory. Stofa passed for 307 yards and four touchdowns, but was intercepted twice. Jackson led all receivers with 110 yards on four catches. Auer finished with 156 yards from scrimmage, including a game-high 87 yards rushing.

In a losing effort, Trull also accounted for four touchdowns while passing for 215 yards. Ode Burrell led the Oilers with 73 yards receiving.

For a first-year franchise, the day was a record-setting one for Miami as it completed its biggest comeback while breaking franchise-bests for yards and points. Over the last 55 years, the Dolphins have won more than 470 games, two Super Bowls, five conference titles and 14 division crowns. Their very first season ended in thrilling fashion on this day 55 years ago.