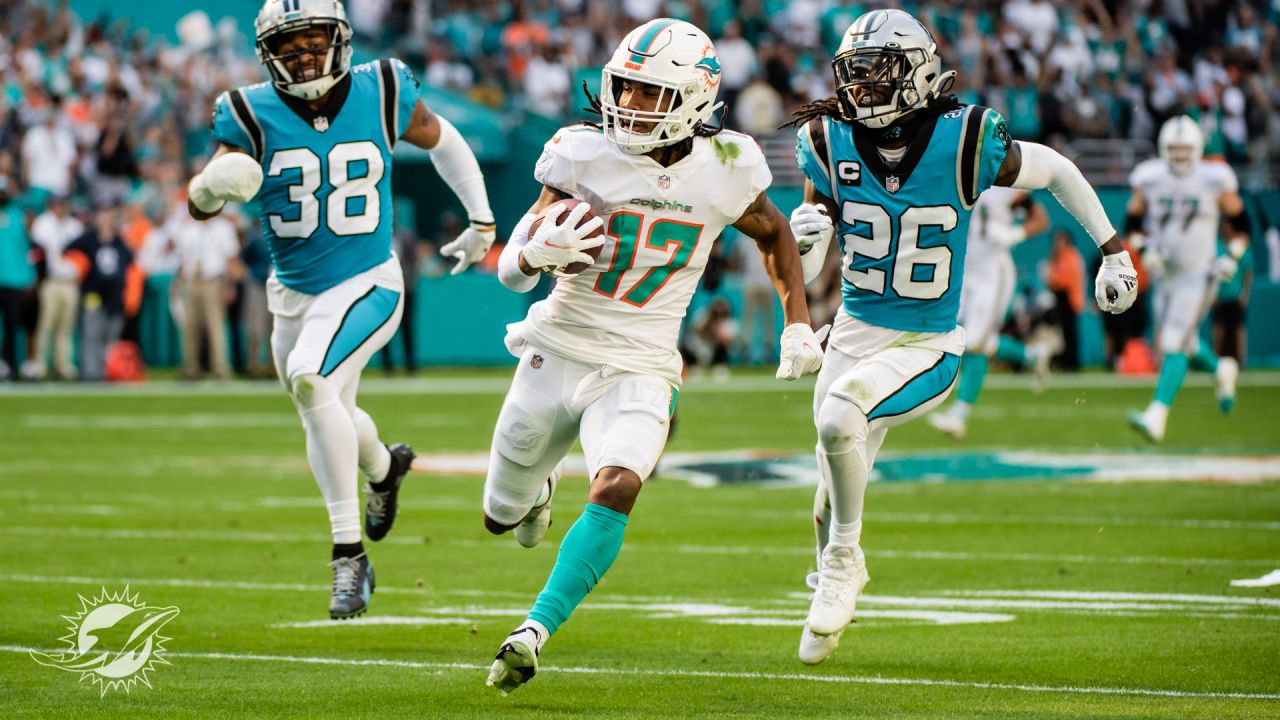 The Miami Dolphins remained one of the hottest teams in the NFL on Sunday.

In what may have been their most impressive showing of the season, Miami blasted the Carolina Panthers at Hard Rock Stadium, 33-10. Since a 1-7 start, the Dolphins have won four straight games and sit at 5-7 overall.

Up next is a home contest against the New York Giants. Before that happens, here’s five “Fin”testing facts from Sunday’s win over Carolina:

Since a rough start, the Miami Dolphins continue to make strides defensively. On Sunday, Miami held the Panthers to just 198 yards of offense. That was the lowest allowed all season for the Dolphins and the lowest since allowing just 196 to the Cincinnati Bengals in a 19-7 win last December.

In the victory over Carolina, Miami tallied five sacks, seven tackles for loss and three interceptions. On special teams, Miami blocked a punt for a touchdown.

One week after setting a new career-high for carries in a game, Miami running back Myles Gaskin set another personal best. On Sunday, he rushed for a pair of touchdowns. Entering the contest, Gaskin had rushed for just one touchdown all season, but scored two 3-yard touchdowns in the win. Gaskin caught two touchdowns in a loss to the Tampa Bay Buccaneers earlier this season.

For rookie wide receiver Jaylen Waddle, Sunday was the best game of his young NFL career. Waddle finished with nine catches for a career-high 137 yards and a touchdown. The 137 yards receiving was the most for any Miami player this season.

It was the most for a Miami receiver since DeVante Parker tallied 137 yards in the 2019 regular-season finale against New England. Waddle joined tight end Mike Gesicki as the only Dolphins to finish with 100 yards receiving in a game this season.

Entering the Week 10 matchup against the Baltimore Ravens, the Miami Dolphins had not had an offensive play go for 50 yards or more all season. It has now happened for the Dolphins in three consecutive games. In Sunday’s win over Carolina, Waddle set up Miami’s third touchdown with a 57-yard reception from Tagovailoa. In previous weeks, Isaiah Ford, Albert Wilson and Mack Hollins all made big plays through the air.

Sunday was a great one for Miami rookies. In addition to Waddle’s career-day, defensive end Jaelen Phillips had one of his own. Phillips finished with three sacks in the victory and was a mainstay in the Carolina backfield.

Phillips now leads Miami with 6.5 sacks on the season. The last Dolphin to tally three sacks in a game prior to Sunday was Kyle Van Noy in last season’s aforementioned win over Cincinnati.