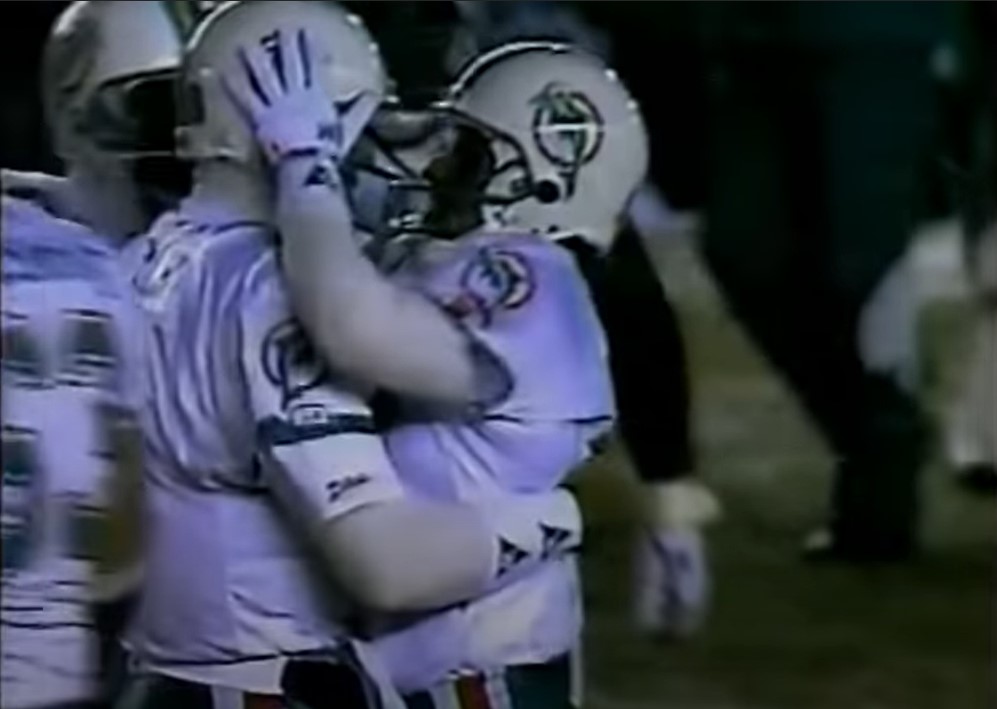 It’s not that often that the Miami Dolphins and Chicago Bears meet on the gridiron.

Although they’ve met just 13 times, there have been some pretty memorable games. That includes one that took place at Soldier Field on this day 30 years ago.

Special teams miscues played a major role in the contest. In the end, the Dolphins rallied from 10 points down in the fourth quarter to win in overtime, 16-13.

The Miami Dolphins were just 5-6 as they made their way to windy, snowy Chicago on Nov. 24, 1991. Miami was desperate for a win to keep its playoff hopes alive.

At 9-2, the Chicago Bears were red hot. Chicago had won five in a row with only one of those wins decided by fewer than 10 points. Through three quarters, it appeared well on its way to running its winning streak to six.

Through three quarters, Chicago’s Brad Muster had scored the game’s only touchdown as the Bears led 13-3. Miami wasted little time making it a 1-score game as Pete Stoyanovich’s second field goal of the day cut the lead to seven less than a minute into the final period.

With less than six minutes remaining, the Bears appeared on the verge of putting the game away. Kicker Kevin Butler had made his first two field goals and lined up for an easy 24-yard try. Holder and quarterback Jim Harbaugh however, mishandled the snap and the lead remained 13-6.

When it came to specials teams blunders, the Bears were just getting started.

The Chicago defense did its job with an interception by Mark Carrier and a defensive stop, but with a little more than two minutes to play, the special teams put it in an unwinnable position. Maury Buford lined up to punt to try to pin the Dolphins deep. The long snap however, sailed over his head.

Buford made a desperation attempt to punt, but it was blocked and Miami recovered at the 4-yard-line. It took just two plays for the Dolphins to draw even at 13 as Dan Marino found tight end Ferrell Edmunds for a 2-yard touchdown. The Bears however, were able to use three completions from Harbaugh for first downs to move into field goal range.

Hoping for better results than last time, Butler lined up for a 50-yard try for the win. His kick had the accuracy, but not the distance. It came up short as time expired and the contest went to overtime.

The Bears would never see the ball again.

On the second set of downs for Miami, the Dolphins faced 3rd-and-6 from just inside midfield when Marino found Mark Clayton for 11 yards and a first down.

One play later, Marino heaved one up.

Chicago cornerback Donnell Woolford had taken Clayton to the ground, but that didn’t disrupt his concentration. While laying on his back, Clayton was able to haul in an incredible 31-yard catch at the 5-yard-line. Two snaps later, Stoyanovich’s 27-yard field goal ended the contest.

The win breathed life into the Dolphins. Miami began a 3-game winning streak to improve to 8-6, but ultimately lost its final two games to finish 8-8.

For Chicago, the disappointing loss began a 2-3 stretch to close the regular season. After going 11-5, the Bears fell to the Dallas Cowboys in the NFC Wild Card, 17-13.