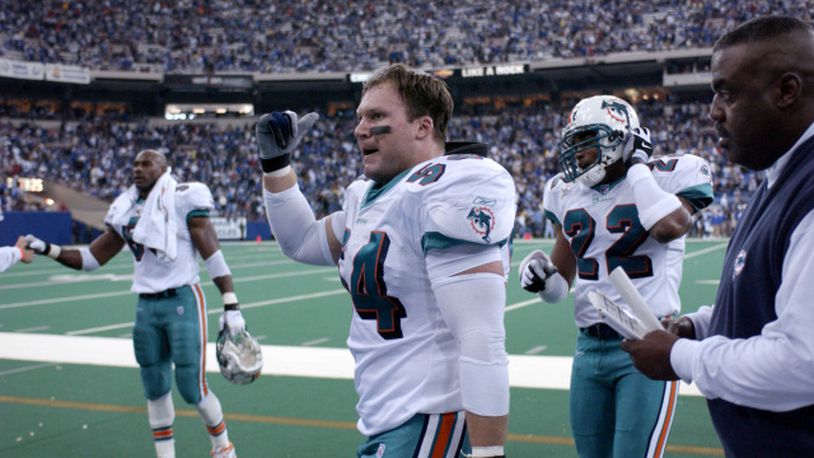 Since the late-1990s, the Miami Dolphins and Indianapolis Colts have played some memorable football games.

Until this season’s contest, the teams had split the last 16 meetings. Of those, only one was decided by more than one possession.

A memorable win for Miami over Indianapolis came on this day 20 years ago. The Dolphins scored the game’s final 10 points to top the Colts, 27-24.

The Colts, at 4-3, were trying to draw even in the division. As the contest entered the final quarter, Indianapolis was in good shape.

The Dolphins Come Through

Third-quarter touchdown passes of 11 and 40 yards from Peyton Manning to Marvin Harrison gave the Colts a 24-17 advantage through three quarters. The Dolphins wasted little time cutting into the lead.

An interception of Manning by Miami linebacker Zach Thomas had set the Dolphins up inside the 35-yard-line. Unfortunately for the Dolphins, the ensuing drive stalled and kicker Olindo Mare’s second field goal of the day cut the lead to four.

On the ensuing drive, the opportunistic Dolphins’ defense came through again. Up 24-20, the Colts moved to inside the Miami 40 with a chance to make it a 2-score game, but Pro Bowl defensive end Jason Taylor was able to strip running back Dominic Rhodes. Taylor recovered and the Dolphins were in business.

Quarterback Jay Fiedler completed three of his first four passes on the next drive, but needed a big one to keep it alive. Facing 4th-and-1 from the Colts’ 39-yard-line, Miami decided to go for it. The Dolphins put the ball in Fiedler’s hands and kept the march intact with a 10-yard completion to Chris Chambers.

On the very next play, the two hooked up again to put the Dolphins ahead for good.

After a play fake, Fiedler found Chambers uncovered down the sidelines. The 29-yard touchdown gave Miami a 27-24 lead with less than eight minutes to play.

Following an exchange of punts, the Colts had one last chance. The final drive reached midfield, but a false start and a sack by Taylor put Indianapolis in 4th-and-21. Manning’s final throw of the day was incomplete with 26 seconds remaining and the Dolphins survived.

The Dolphins used big plays in the first half to take a 17-10 lead into the locker room. After a 56-yard touchdown run by Travis Minor gave the Dolphins a 7-3 lead, Manning and Fiedler exchanged touchdown passes.

Fiedler followed Manning’s 8-yard touchdown pass to Harrison with a 74-yard strike to Chambers. Mare’s 31-yard field goal late in the first half pushed the lead to seven.

Fielder finished with 259 yards passing, the two touchdown tosses and the two interceptions. As a team, Miami held the yardage edge, 375-289. To go with his three touchdown tosses, Manning was intercepted twice.

Minor led all rushers with 71 yards. Chambers was the top receiver for the Dolphins with three catches for 113 yards. Harrison recorded nine catches for 174 yards for Indianapolis.

In addition to Thomas, Sam Madison also had a pick for Miami. David Macklin and Mike Peterson each came away with picks for the Colts.

For Indianapolis, the loss would begin a stretch of seven defeats over its final nine games. The Colts finished just 6-10.

With the win, Miami improved to 6-2. The Dolphins would go on to finish 11-5 before falling to the Baltimore Ravens in the AFC Wild Card game.

Throughout the course of the season, Miami rallied from a fourth-quarter deficit to win five times. One of those five victories came on this day two decades ago.