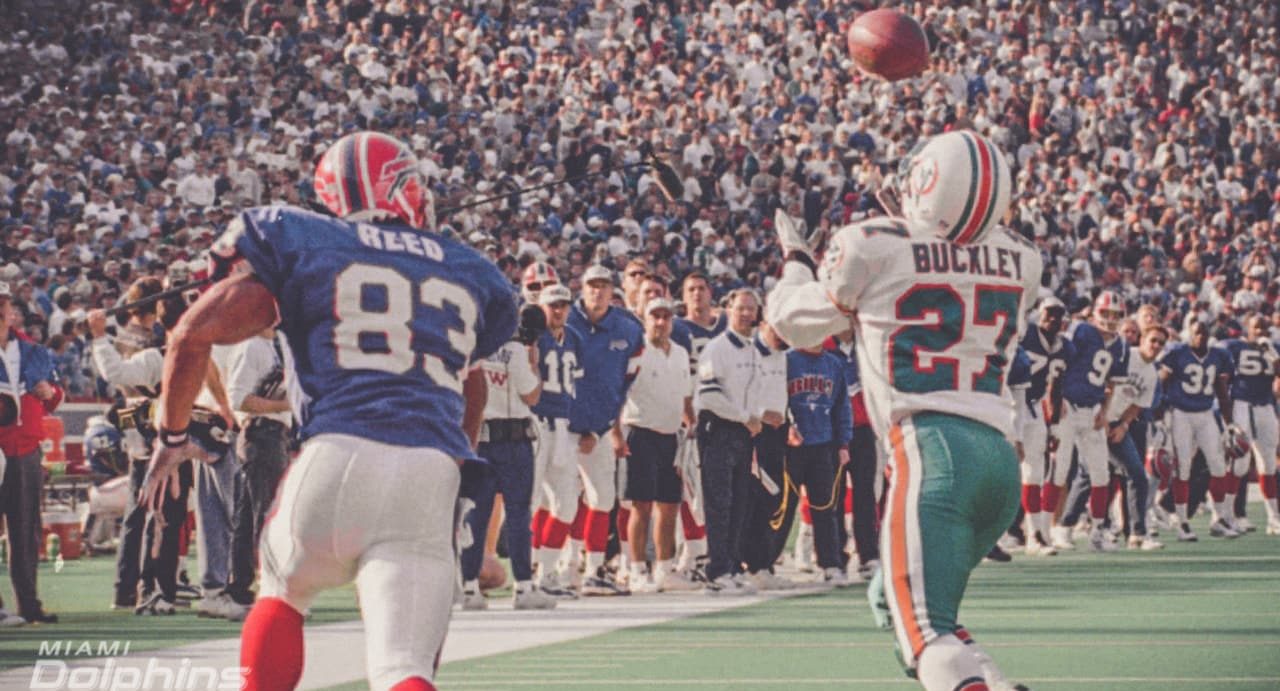 Throughout the 1990’s, games between the Miami Dolphins and Buffalo Bills always seemed to have major implications.

The teams met in the playoffs four times during the decade, but there were some notable regular-season match-ups as well. That includes one that took place on this day 25 years ago.

With Buffalo marching to potentially tie the game, cornerback Terrell Buckley saved the day for Miami. His 91-yard interception return for a touchdown put the exclamation point on a 21-7 win.

First place in the AFC East was on the line as the Dolphins arrived in Rich Stadium on Oct. 13, 1996. In its first year under head coach Jimmy Johnson, Miami was 3-2 but had lost consecutive games.

The Bills were 4-1 and atop the division. All four victories for Buffalo had come by seven points or less. The previous meeting between the Dolphins and Bills in Buffalo had come in the AFC Wild Card a season earlier. Buffalo rolled 37-22 in what would be the final contest in the career of legendary Miami head coach Don Shula.

What was once a 14-point lead for Miami appeared to be evaporating. Overtime seemed inevitable.

Buffalo trailed 14-7 when it took over just shy of midfield with a little over two minutes to play. On the second play of the drive, quarterback Jim Kelly found Andre Reed for a 49-yard gain to the Dolphins’ 2-yard-line.

On the next play however, Kelly was called for intentional grounding. That pushed the ball back to the Miami 12-yard-line. After an incomplete pass and a 2-yard run by Thurman Thomas, the contest came down to one play.

On 4th-and-goal from the 10-yard-line, Kelly fired toward Reed. Buckley was able to step in front of the pass and making a juggling interception. After that, there was nothing but green grass in front of him and he went the distance to put the game away with 47 seconds remaining.

The interception would be the third of the day for Kelly. Calvin Jackson and Zach Thomas also came with picks in the contest. Kelly also lost a fumble in the contest.

With quarterback Dan Marino injured and Craig Erickson starting in his place, the Dolphins managed just 239 yards of offense, but protected the ball. Karim Abdul-Jabbar got the scoring started with a 3-yard touchdown run for the Dolphins in the second quarter.

In the third, Irving Spikes scored from a yard out to give Miami a 14-0 lead. Thomas answered for Buffalo with a 19-yard touchdown run. Thomas led all rushers with 85 yards in the contest.

Kelly would finish with 247 yards passing, but the four turnovers were too much to overcome. Reed led all receivers with 134 yards on 10 catches. Randal Hill led Miami with four catches for 94 yards.

The story of the day for Miami was the defense. In addition to the four forced turnovers, the Dolphins added seven sacks. Trace Armstrong had 2.5 of them while defensive tackle Tim Bowens added two.

The victory moved Miami into a tie for first place in the AFC East, but that would be short-lived. The Dolphins proceeded to lose their next three games and six of the next eight. Miami closed the year on a 2-game winning streak to finish 8-8, which included a 16-14 win over Buffalo in Miami. It marked the first time the Dolphins swept the season series from the Bills in 10 years.

The Bills would go on to finish 10-6 before falling at home to the Jacksonville Jaguars in the AFC Wild Card game. Prior to that defeat, Buffalo’s only other home loss that season came to the Dolphins. It came on this day a quarter-century ago.