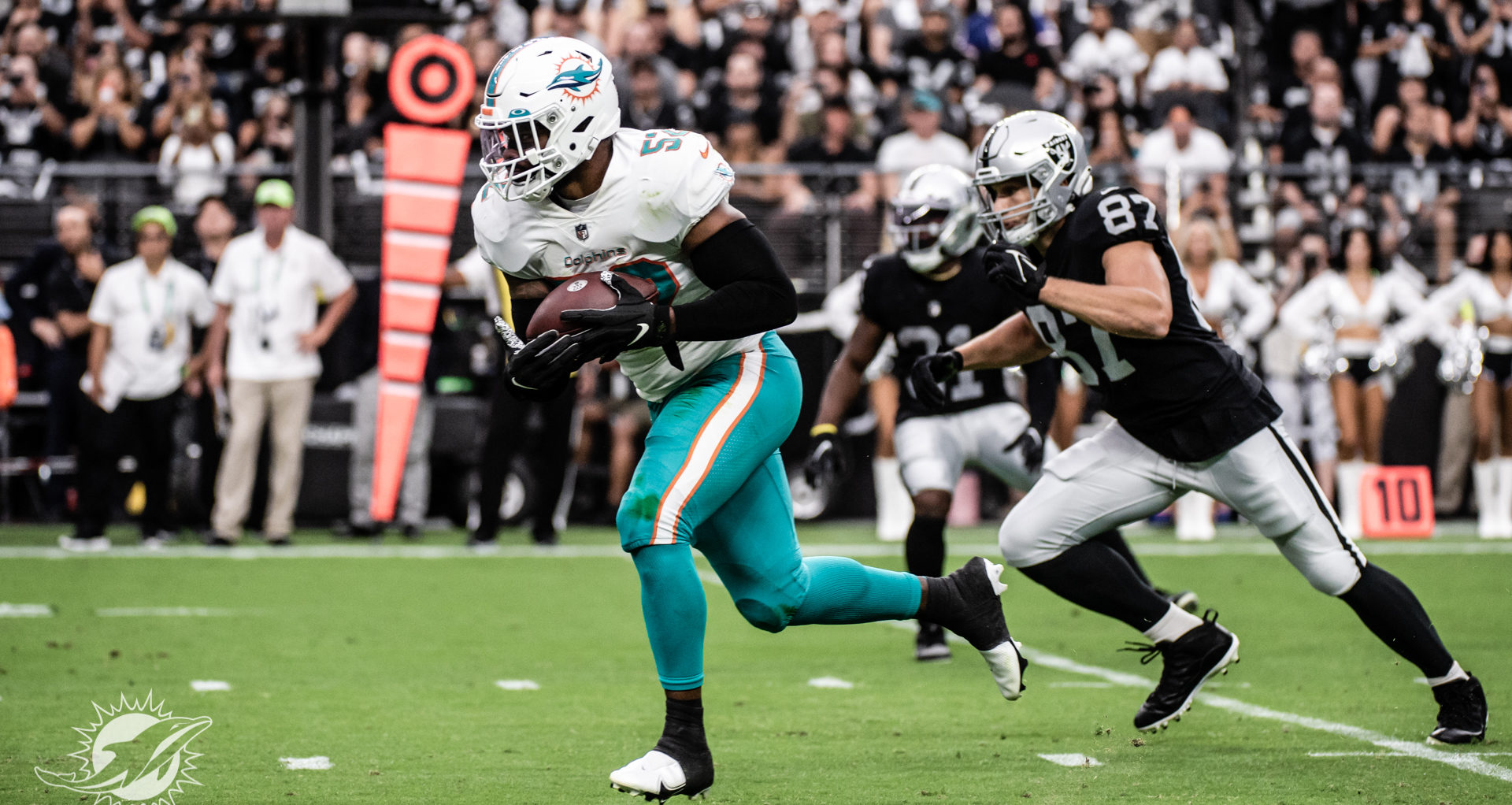 A great start and a furious comeback were part of valiant effort for the Miami Dolphins on Sunday. In the end however, they were unable to knock the Las Vegas Raiders from the ranks of the unbeaten.

The Dolphins rallied from 11 points down in the fourth quarter to force overtime. After exchanging field goals to start the extra period, Daniel Carlson knocked through the game-winner as time expired and Las Vegas prevailed, 31-28.

The loss drops Miami to 1-2. The Dolphins now get set to return home to host the Indianapolis Colts.

Before they do, here are five “Fin”teresting facts from Sunday:

The Miami Dolphins wasted little time extending the NFL’s longest streak of consecutive games with a forced turnover to 25. With the Raiders driving midway through the first quarter, linebacker Elandon Roberts intercepted Las Vegas quarterback Derek Carr and returned the pick 85 yards for a touchdown. That would wind up being the only turnover of the contest, but it extended the streak.

With the 85-yard interception return for a touchdown, Elandon Roberts became the first Miami player to score a defensive touchdown this season. Prior to Roberts’ pick-6, the last Miami defender to score a touchdown was Shaq Lawson early in last season’s win over the Arizona Cardinals. The last Miami player to return an interception for a touchdown was Eric Rowe against the New England Patriots in the 2019 regular season finale. The last linebacker to do so was Jerome Baker against the New York Jets in 2018.

Entering Sunday’s contest, the Miami Dolphins had played just one overtime game under head coach Brian Flores. That was a 38-35 victory over the Cincinnati Bengals late in the 2019 season. Sunday’s defeat serves as the first loss in overtime during the Flores era. It was also the first overtime loss in franchise history where the Dolphins scored in the extra period. In fact, Sunday’s defeat is the first overtime loss for Miami since it fell to the Arizona Cardinals early in 2012. The Dolphins had won five straight in overtime.

Although playing an extra 10 minutes of football didn’t help matters, the 497 yards allowed by the Dolphins on Sunday is the most on the road during the Flores era. Prior to Sunday, the last time that the Dolphins allowed more yardage was in last season’s home opener against the Buffalo Bills when they gave up 523. The last time that Miami allowed more in a road game came in 2017 when it allowed 548 yards in a 45-21 loss to the Carolina Panthers.

With Jacoby Brissett getting the start on Sunday, it marked that sixth straight season that multiple quarterbacks made starts for the Dolphins. Last season, both Tua Tagovailoa and Ryan Fitzpatrick made starts. Brissett finished with 215 yards passing a rushing touchdown. The last time that a Miami quarterback started all 16 games was in 2015 with Ryan Tannehill behind center.