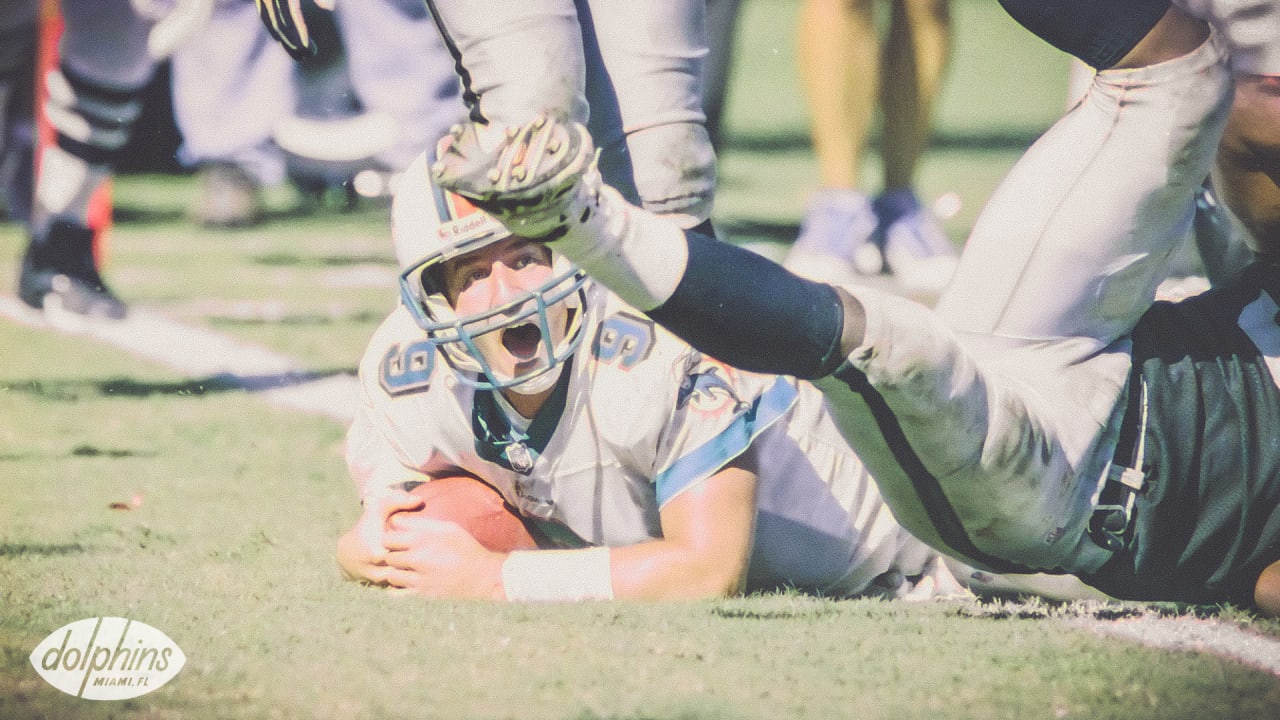 For Miami Dolphins’ quarterback Jay Fiedler, he had the unenviable task of following a legend.

Fiedler however, handled that role admirably. In five years as a starter, he compiled a 36-23 record for the Dolphins as the successor to the great Dan Marino.

One of his finest moments came on this day 20 years ago. Fiedler engineered the game-winning drive and scored the winning touchdown with seconds remaining in an 18-15 victory over the Oakland Raiders.

In a rematch of the 2000 AFC Divisional round that the Raiders won 27-0, the teams arrived at Pro Player Stadium on Sept. 23, 2001 with identical 1-0 records. The Raiders had finished one shy of the Super Bowl in 2000 while Miami was coming off an 11-5 campaign and an AFC East crown.

The contest was seen as an early-season statement game. Through 58 minutes, the teams had combined for just one offensive touchdown, but that was what the Dolphins needed to win it.

Down 15-10, Miami started its final drive at its own 20-yard-line. With 1:41 remaining and no timeouts, the Dolphins were tasked with marching 80 yards for the win.

On the march, Fiedler completed his first four passes, which included a 20-yard strike to Dedric Ward and a 27-yard hookup with Chris Chambers. The connections put Miami in the red zone. After a short run by Travis Minor and an incomplete pass, Miami faced 4th-and-3 from the 18.

Fielder stayed calm and collected, keeping the drive alive with a 9-yard completion to Ward. After a 7-yard scramble, Fiedler was forced to spike the ball and stop the clock with just 12 seconds remaining.

With the ball on the 2, Fiedler rolled right. Chased by former Dolphins’ defensive end Trace Armstrong, Fiedler was able to weave his way inside and dive for the end zone. With just five seconds left, Miami had regained the lead. Wide receiver James McKnight ran in the 2-point conversion try to make it a 3-point game.

Prior to the winning score, Fiedler had scored Miami’s lone touchdown. He also gave the Raiders theirs.

Oakland led 6-0 late in the first half on a pair of Sebastian Janikowski field goals. With just 16 seconds to play in the half, Fiedler scored his first 2-yard rushing touchdown.

Miami led 7-6 at the break and 10-9 after three, following an exchange of field goals from Janikowski and Olindo Mare. The Raiders’ lone touchdown came early in the fourth quarter when Anthony Dorsett returned a Fiedler pick 26 yards for a touchdown. The 2-point conversion failed and the lead remained five.

The Miami defense held Oakland to just 216 yards of offense, but it took a late touchdown drive to seal the win. Fiedler passed for 217 yards in the win, but was intercepted twice. Miami’s Lamar Smith led all rushers with 92 yards on the ground.

The contest was seen as a big early-season showdown and may have been a critical loss for Oakland. The Raiders finished 10-6 and were forced to travel to New England for the Divisional round in the famous “tuck rule” game.

Miami finished 11-5 for the second straight year. The Dolphins ultimately fell to the Baltimore Ravens in the Wild Card round, 20-3.

Of Miami’s 11 wins in 2001, only one came on a last-minute touchdown. It happened on this day two decades ago.