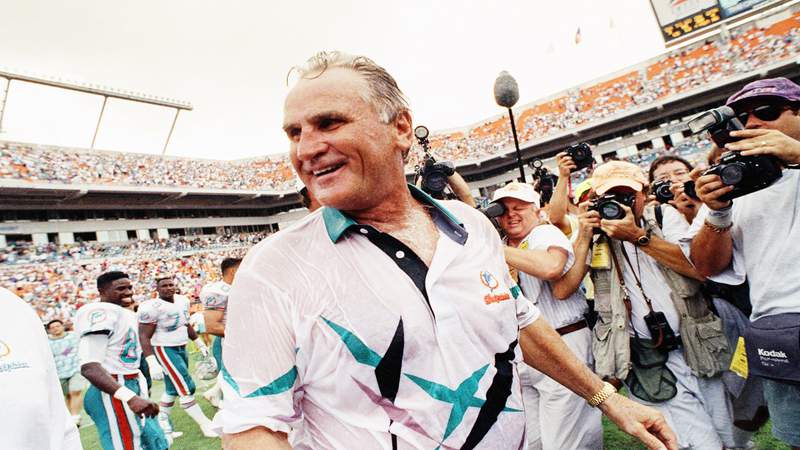 Although Bill Belichick will likely soon change that, only two coaches in NFL history have reached 300 career regular season wins.

It was on this day 30 years ago that Miami Dolphins’ legend Don Shula joined that club. The Dolphins got Shula there with a comeback win over the Green Bay Packers at home, 16-13.

Sitting at 299 career wins, Shula was just one shy of joining Chicago Bears’ legend George Halas in the 300 club on Sept. 22, 1991. The Dolphins were off to a 1-2 start and in desperate need of an early-season victory when the teams arrived at Joe Robbie Stadium.

Green Bay was 1-2 and coming off its first win of the season over the Tampa Bay Buccaneers. For three quarters, it looked as though the Packers might sweep the Florida teams.

Through three quarters, Green Bay led 13-6, but that would change quickly in the fourth quarter. After a 54-yard punt by Miami’s Reggie Roby pinned the Packers at their own 1-yard-line, they sought breathing room.

On the final play of the third quarter, Allen Rice was stopped for no gain. On the first play of the fourth quarter, Miami drew even.

Green Bay quarterback Don Majkowski took a deep drop-back into his own end zone. Without being touched, Majkowski lost control of the football. There to recover it in the end zone was Miami defensive tackle Chuck Klingbeil, knotting the game at 13-13.

After three straight 3-and-outs, a 40-yard completion from Dan Marino to Mark Duper moved the Dolphins inside the Packers’ 15-yard-line. The drive would stall and Pete Stoyanovich knocked through a 31-yard field goal to give Miami a 16-13 lead.

In an exchange of punts, Roby again pinned the Packers deep as his 53-yard punt put Green Bay at its own 5. On 3rd-and-7 from the 8-yard-line, Majkowski scrambled past the 20-yard-line, but Mike Iaquaniello was able to jar the ball loose. Vestee Jackson recovered with less than two minutes to go to seal the win for Miami.

The Dolphins actually started strong. Stoyanovich connected on field goals of 43 and 52 yards to give Miami a 6-0 lead after a quarter.

Green Bay answered with 13 straight points in the second. Following a pair of field goals from Chris Jacke, Majkowski found Ed West for a 14-yard touchdown with less than a minute to play until halftime.

The teams combined for just 82 yards rushing. Majkowski passed for 238 yards in the loss while Marino threw for 212 yards. Green Bay’s Vinnie Clark and Miami’s Jarvis Williams each came up with interceptions for their respective teams.

As far as the 1991 season went, it wouldn’t be a special one for either Miami or Green Bay. The Packers finished just 4-12 in what would be the final season under head coach Lindy Infante.

After a 3-5 start, the Dolphins reeled off five wins in six games, but closed the year on a 2-game losing streak to finish 8-8 and miss the playoffs. Still, Shula’s 300th win was cause for celebration.

He would break Halas’ all-time wins record two years later. Those remain the only two head coaches with 300 wins. Shula hit that mark on this day three decades ago.