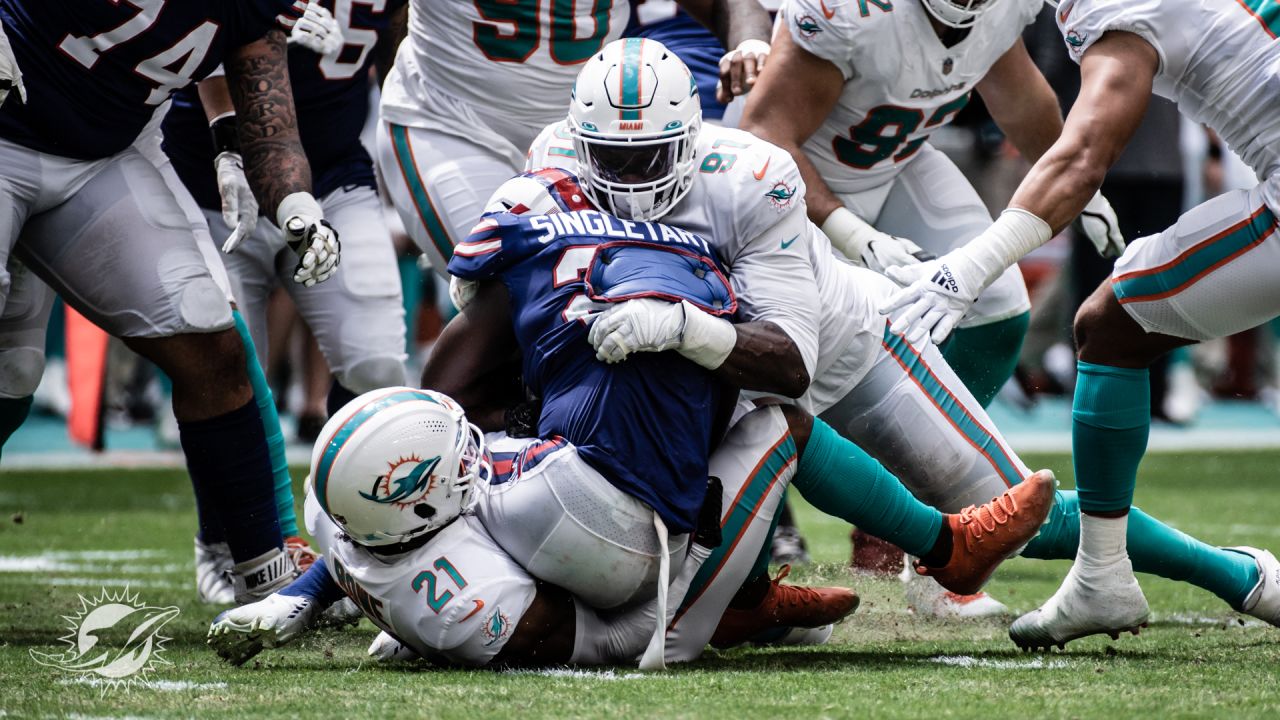 Hard Rock Stadium was abuzz for the home opener for the Miami Dolphins on Sunday. Unfortunately, that was short-lived.

The Buffalo Bills came to South Florida and thoroughly dominated the Dolphins, 35-0. Buffalo had a 2-score lead less than eight minutes in and never looked back.

Despite the loss, the Dolphins remain in a tie for first place in the AFC East at 1-1. They’ll hit the road next week to take on one of only two undefeated teams in the conference — the Las Vegas Raiders.

Before they do however, we look back on Sunday’s massacre and give you five “Fin”teresting facts:

Things went south in a hurry for the Miami Dolphins on Sunday and that went beyond the scoreboard. On just Miami’s second drive of the game, the Dolphins lost starting quarterback Tua Tagovailoa for the remainder of the day to a rib injury. Tagovailoa was just 1-for-4 with 13 yards before exiting. Fortunately for the Dolphins, the injury is not considered to be serious. The four pass attempts is the fewest for a Miami starter since Jay Cutler threw two in the regular-season finale in 2017. That was also a home loss to the Buffalo Bills.

Now in his third year as head coach of the Miami Dolphins, Brian Flores has defeated every AFC East opponent except the Buffalo Bills. With Sunday’s 35-0 loss, Flores fell to 0-5 as a head coach against the Bills. Flores has a winning record against the other two division foes. During his tenure, the Dolphins are 3-2 against the New England Patriots and 3-1 against the New York Jets.

There were few bright spots for the Dolphins on Sunday, but there was at least one. Miami extended the NFL’s longest active streak of games with a takeaway. Buffalo scored touchdowns on each of its first two drives, but its third ended on a turnover. On a completion from Josh Allen to Zack Moss, Miami linebacker Jerome Baker was able to strip the Buffalo running back and safety Brandon Jones recovered. Jones was then stripped, but rookie Jevon Holland preserved possession for the Dolphins as they managed a takeaway for the 24th straight game. Miami added a second takeaway later on Xavien’s Howard’s first interception of the season. Howard led the NFL with 10 picks a year ago. While Miami managed two takeaways, it turned the ball over three times.

With Sunday’s defeat, the Dolphins have now been involved in the first shutout of the season for the third straight year. Last season, Miami pitched the first shutout as it blanked the New York Jets 24-0 in October. In 2019, Miami was blanked 43-0 — also in Week 2 at home — by the New England Patriots.

5. Home Not So Sweet Early On

Brian Flores is one of the promising young coaches in the NFL, but home openers have not been kind to him. With Sunday’s loss, Flores fell to 0-3 in home openers. The Dolphins lost a hard-fought 31-28 contest against the Bills to open the home slate last season. In 2019, Miami opened the season with a 59-10 loss to the Baltimore Ravens in Flores’ head coaching debut.