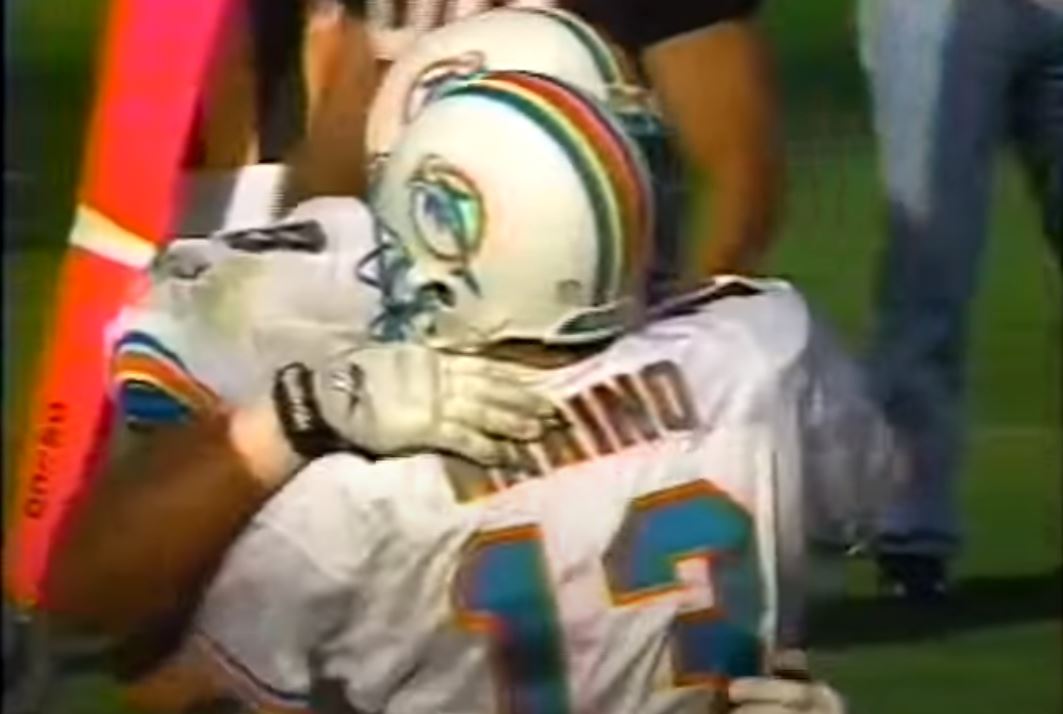 During their 13 years together with the Miami Dolphins, head coach Don Shula and quarterback Dan Marino had their fair share of fourth-quarter comebacks.

The final one took place on this day 25 years ago. In Shula’s next-to-last home win as a head coach, Marino threw the game-winning touchdown pass to Irving Fryar as the Dolphins erased an 11-point fourth-quarter deficit to top the Atlanta Falcons, 21-20.

At 6-6, the Dolphins were desperate for a win as they arrived at their home stadium of Joe Robbie Stadium on Dec. 3, 1995. After a 4-0 start, Miami had dropped six of eight and three straight games.

Atlanta was 7-5 and in line for just its second playoff appearance in 13 years. For much of the day, the Falcons seemed to be furthering that cause.

The fourth quarter was just three plays old when the Falcons pushed their lead to double digits. Jeff George’s 16-yard touchdown pass to Terance Mathis gave the Falcons a 20-9 advantage and Miami looked to be in trouble.

The Dolphins answered with a 13-play, 80-yard drive that culminated in a 3-yard touchdown run by Bernie Parmalee. Miami missed the 2-point conversion, but with eight minutes to play, was a touchdown from the lead.

Miami forced a 3-and-out on the ensuing drive, but a late Marino miscue looked to be too much to overcome. After Marino was intercepted by Atlanta linebacker Clay Matthews, the Falcons had hopes of putting the game away.

Atlanta melted more than four minutes off the clock and needed just a yard to end it. After a 9-yard run by Jamal Anderson to the Miami 27-yard-line set the Falcons up with 2nd-and-1, the Dolphins’ defense held strong.

Following stops on Craig Heyward and George, the Falcons faced 4th-and-1. Hewyard took the hand-off from George, but was met by linebacker Bryan Cox for a loss. The Dolphins still had to go 72 yards in less than two minutes for the win with no timeouts, but at least they had a chance.

Marino atoned for the costly turnover by completing three passes for first downs. After a 12-yard scramble by Marino put the Dolphins at the 21-yard-line with 20 seconds remaining, Marino took his shot.

Marino moved to his right to buy just a little bit of time before firing to an open Fryar near the goal line. Fryar juggled the pass, but was able to secure it before going to the ground in the end zone with 11 second left.

The 2-point conversion try was again no good, but it didn’t matter. The Dolphins had won, 21-20.

Miami cut the lead to five on Marino’s 6-yard touchdown pass to Gary Clark late in the first half. Marino finished with 343 yards passing, two touchdowns and two interceptions. George passed for 210 yards for the Falcons.

Parmalee led Miami with a game-high 70 yards rushing. O.J. McDuffie led the Dolphins with 96 yards receiving — also a game-high. Keith Ross had the other interception for the Atlanta defense.

The victory for Miami was a critical one as the Dolphins finished 9-7 and made the playoffs for the second straight season. Atlanta also went 9-7. Both teams lost in the Wild Card round.

Over the course of his illustrious career, Shula won 347 games as an NFL head coach. No. 345 was a real thriller. It happened on this day a quarter-century ago.