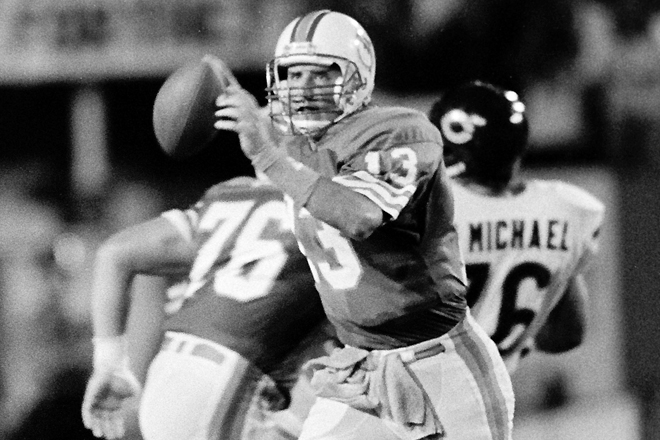 Ask a lot of football fans who the greatest defense of all-time is and many will still say the 1985 Chicago Bears.

Under coordinator Buddy Ryan and head coach Mike Ditka, the Bears held opponents to just 12.4 points per game and pitched four shutouts en route to their only Super Bowl victory. That season, the Bears won 18 of the 19 games they played.

A 38-24 loss to the Miami Dolphins on a warm Monday night in South Florida. It happened on this day 35 years ago.

As the Bears and Dolphins arrived at the Orange Bowl on Dec. 2, 1985, many believed that Miami was the biggest threat to Chicago’s perfect season. The Bears were 12-0 and had allowed just three total points in the previous three weeks.

The Dolphins were 8-4 and had won three straight. Only one team had ever completed a perfect season — the Miami Dolphins in 1972.

Many of those from that team were at the Orange Bowl for that Monday Night Football contest, hoping to see history preserved. They didn’t leave disappointed.

Regarded as the greatest defense of all-time, the Bears weren’t good enough to contain Dan Marino that night. Marino passed for 270 yards and three touchdowns in a win where Miami never trailed.

With Chicago quarterback Jim McMahon out of the starting lineup, the Bears started Steve Fuller and early on, he was able to match Marino. After Marino’s 33-yard touchdown pass to Nat Moore got the scoring started, Fuller tied the game on a keeper.

Fuad Reveiz’s 47-yard field goal late in the first quarter put Miami ahead for good. The second quarter was where the Dolphins would open things up.

A Kevin Butler field goal was all the Bears could muster in the second quarter. Ron Davenport rushed for a pair of short touchdowns for Miami before a blocked punt set up Marino’s second touchdown pass to Moore. The a 6-yard strike gave the Dolphins a 31-10 advantage at the break.

Fuller’s second 1-yard touchdown run of the night cut the lead back to 14, but Miami’s final touchdown of the evening left no doubt that it was going to be the Dolphins’ night. With the ball at the 42-yard-line, Marino’s pass flew directly into the helmet of Chicago defensive lineman Dan Hampton. The ball took a big bounce and found the hands of Miami receiver Mark Clayton, who went the distant to push the Dolphins’ lead back to 21.

Fuller’s 19-yard touchdown pass to Ken Margerum cut the lead to 38-24 before the end of the third quarter, but neither team would score in the fourth. The Bears finished with 343 yards to 335 for Miami, but turned the ball over four times in the loss.

Fuller was picked off twice before McMahon entered and threw an interception. Glenn Blackwood, William Judson and Bob Brudzinski all had interceptions for Miami.

The 38 points would serve as 10 more than any other team would score on the Bears during the 1985 season. Chicago allowed just 43 points total over its final six games.

The Dolphins and Bears nearly met again in the Super Bowl. Miami reached the AFC Championship, but was handled by the New England Patriots, 31-14. After shutting out the New York Giants and Los Angeles Rams in the playoffs, the Bears destroyed the Patriots in Super Bowl XX, 46-10.

Although the Bears managed to win football’s ultimate prize, Miami was able to preserve the lone perfect season in pro football history. It did so on this day 35 years ago.