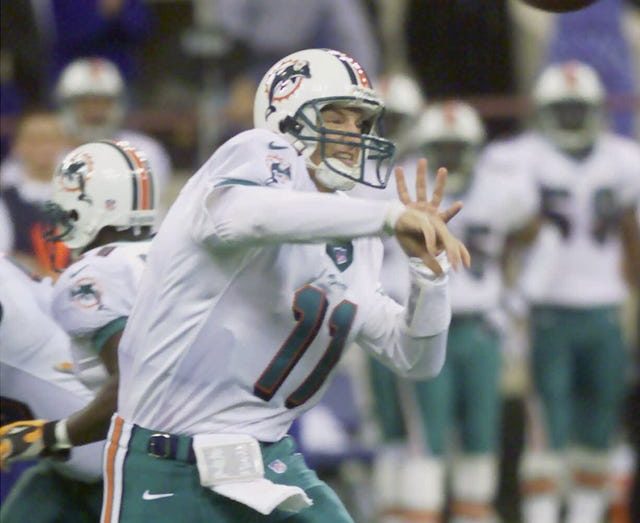 In three years with the Miami Dolphins, Damon Huard made just six starts at quarterback.

When the Dolphins needed him however, he performed admirably. That was the case on this day 20 years ago as he rallied Miami to a critical 17-14 road win over the Indianapolis Colts.

It wasn’t long before kickoff that the Miami Dolphins made the decision to start Huard over injured starter Jay Fiedler on Nov. 26, 2000. The Dolphins were 8-3 and leading the AFC East, but the Indianapolis Colts were on their heels.

Led by third-year quarterback Peyton Manning, the Colts had won the division the year prior. They were just a game back of Miami at 7-5. Indianapolis finished with 100 yards more than the Dolphins, but in the end, it was Huard and not Manning who came through in the clutch.

Up 14-10 with three minutes to go, the Colts were in the process of putting the game away. Indianapolis faced a 3rd-and-7 from the Miami 30-yard-line and were two first downs away from putting the contest on ice. At worst, it appeared that the Colts would have to settle for a field goal and a 7-point lead.

But on that critical third down play, Miami safety Brock Marion came away with a critical interception. A penalty on the return would push the Dolphins back inside their own 15-yard-line, but at least there was life.

To that point, Huard had thrown for just 107 yards. On his final drive, he passed for 76 yards and the winning score.

The drive started with a 28-yard gain on a screen pass to running back Autry Denson. Huard missed Denson on the next play, but he wouldn’t misfire again.

Denson carried twice for 10 yards on the drive while Huard completed three passes to the running back. Huard also found Leslie Shepherd and Bert Emanuel on the drive. With more than a minute to play and the Dolphins at the Indianapolis 17, Huard’s final throw would turn out to be the game-winner.

With two defenders in the area, Huard delivered a strike to Oronde Gadsden near the left sideline the end zone. Gadsden made the catch with 1:10 to play to put the Dolphins back in front.

Indianapolis marched inside the Miami 45-yard-line on the game’s final possession, but after three straight incomplete passes from Manning, kicker Mike Vanderjagt was forced to try a 59-yard field goal. Vanderjagt had hit a 53-yarder to beat the Dolphins the year before in Miami, but the kick was blocked. The Dolphins had scored their third straight win in Indianapolis.

Prior to the fourth quarter, the teams had combined for just two touchdowns. The Colts drew first blood more than five minutes in as Manning fired a 27-yard scoring strike to Marvin Harrison. That would be the Colts’ final points until the fourth quarter.

After an Olindo Mare field goal put the Dolphins on the board in the second quarter, J.J. Johnson scored from three yards out midway through the third period to give Miami its first lead. Indianapolis regained the lead on the second play of the fourth quarter when Manning again found Harrison for a touchdown — this one from eight yards away.

The victory in Indianapolis would loom large for the Dolphins. At 11-5, Miami finished one game better than the 10-6 Colts that season.

Indianapolis beat Miami when the teams met in South Florida, but they would meet a third time in the AFC Wild Card game. The Dolphins won that one 23-17 in overtime at Pro Player Stadium.

Miami wouldn’t have had the opportunity to host that game without the late-November victory at the RCA Dome. It took place on this day two decades ago.

[…] was a late touchdown that had delivered Miami when the teams met in Indianapolis earlier in the season. With five minutes to play in the game, the Dolphins needed another one to […]