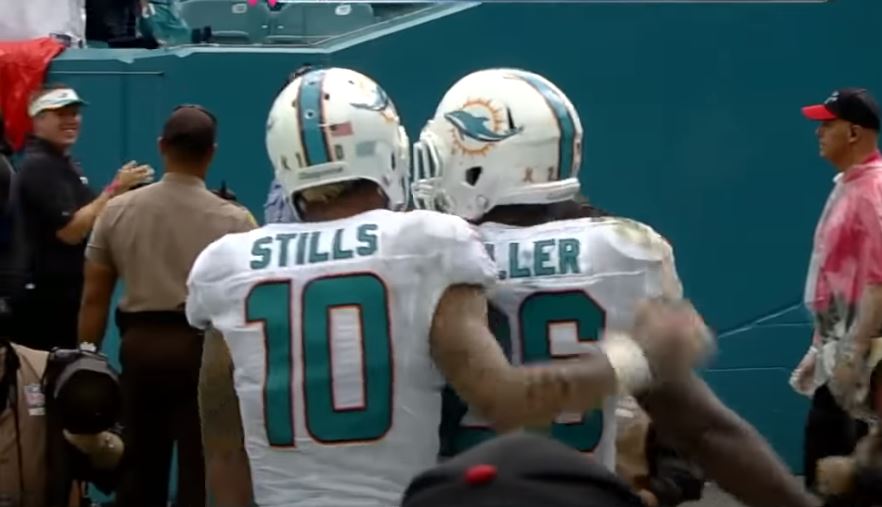 In the NFL, 18 points is a pretty wide margin of victory.

The Miami Dolphins were 2-3 as a team, but looking to go 2-0 under interim head coach Dan Campbell as they arrived at Sun Life Stadium on Oct. 25, 2015. Miami was coming off an impressive 38-10 road win over the Tennessee Titans.

Houston was just 2-4. The Texans however, were coming off a win over the Jacksonville Jaguars. At that point, Houston was the only NFL team that Miami had never defeated.

It Gets Ugly Quick

It wasn’t long into the contest that it became apparent that the day would belong to the Dolphins. Just over a minute into the second quarter, Miami led 35-0.

The Dolphins scored touchdowns on four of their first five drives. An 88-yard drive to open the contest was capped when quarterback Ryan Tannehill found Rishard Matthews for a 53-yard touchdown.

After three straight punts, Miami doubled its lead on the first play of a drive that started at midfield. Tannehill’s first of two touchdown passes to Jarvis Landry went for 50 yards to put Miami up 14-0. A 10-yard connection between the two gave the Dolphins a 21-0 lead at the end of a quarter.

Less than a minute into the second quarter, Tannehill’s fourth and final touchdown pass of the day was a 53-yard toss to running back Lamar Miller. Two plays into Houston’s next possession and Miami was in the end zone again.

Down 28-0, things went from bad to worse for Houston. Miami safety Reshad Jones returned a Brian Hoyer interception 23 yards to push the Dolphins’ lead to 35. Miller put the exclamation point on a record-setting first half with an 85-yard touchdown run with less than three minutes remaining.

Up 41-0 at halftime, the Dolphins managed just a field goal in the second half, but that didn’t matter much. Arian Foster scored a pair of touchdowns for Houston in the third quarter. Hoyer and Nate Washington connected for a pair of fourth-quarter touchdowns to make the final score look more respectable.

The Dolphins’ 21 first-quarter points tied a team record and the 41 points in a half broke the record set in 1967. Miami also became the first team in at least 75 years to score four touchdowns of at least 50 yards in a half.

Going back to the win over Tennessee, Tannehill set an NFL record for consecutive completions with 25. Tannehill finished 18-for-19 passing for 282 yards and four touchdowns.

Miller finished with 175 yards rushing — three short of a career-high — on just 14 carries. He finished with 236 yards from scrimmage, adding 61 yards receiving on three catches.

Although the offense stole the show, Cam Wake and Ndamukong Suh each had two sacks for the Dolphins’ defense. In addition to the interception return for a touchdown, Jones led Miami with eight total tackles.

The Dolphins were riding high after two games under Campbell, but unfortunately for Miami, it came crashing back down to earth. Miami lost seven of its next nine games before finishing 6-10.

Following the embarrassing loss, Houston’s season actually turned around. The Texans went 7-2 for the remainder of the season to sneak into the playoffs. They were shut out by the Kansas City Chiefs in the AFC Wild Card game, 30-0.

That victory however, remains Miami’s lone win over the Texans. It was one where multiple records were set and it happened on this day five years ago.