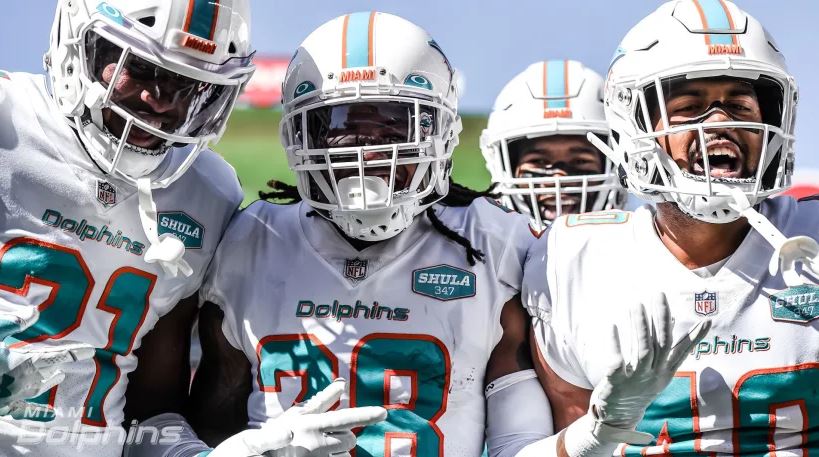 The most optimistic Miami Dolphins fans probably wouldn’t have predicted what took place on Sunday.

Against the reigning NFC champion San Francisco 49ers, the Dolphins dominated from the start. Miami picked up its second road win of the year with a 43-17 rout.

Finding the bad will be tougher this week than most, but as usual, we break down what went right and what did not for the Dolphins:

With many clamoring for a quarterback change, veteran Ryan Fitzpatrick enjoyed perhaps his best game as a member of the Miami Dolphins. Fitzpatrick posted a near perfect quarterback rating, going 22-for-28 passing with 350 yards and three touchdowns to three different receivers.

As far as receivers go, Preston Williams had a career day. Williams finished with four catches for a career-high 106 yards and a touchdown. It was his first career 100-yard game.

As a team, the Dolphins finished with a season-high 436 yards. The 43 points is the most scored by the Dolphins since beating the Houston Texans 44-26 on Oct. 26, 2015. Miami had not cracked 40 points since until Sunday.

The Dolphins also scored more points than any opponent ever at Levi’s Stadium. They possessed the ball for nearly 37 minutes in the victory.

Defensively, Miami may have been even more impressive. The Dolphins allowed a season-low 259 yards and set a season-high with five sacks and a season-high tying six tackles for loss. Miami lived in the backfield with five different players recording sacks.

Jerome Baker, Andrew Van Ginkel, Emmanuel Ogbah, Zach Sieler and Elandon Roberts all got to the quarterback. Van Ginkel led Miami with 1.5 tackles for loss. Baker was the top tackler with eight stops.

The play of the Miami defense forced San Francisco head coach Kyle Shanahan to pull starting quarterback Jimmy Garoppolo at halftime. Garoppolo was just 7-for-17 for 77 yards with two interceptions. Xavien Howard recorded an interception for the third straight game while Bobby McCain’s first pick of the year set up a Miami field goal right before halftime. The three forced turnovers was a season-high.

On special teams, kicker Jason Sanders stayed perfect. Sanders made all five of his field goal attempts with a long of 50 yards. Miami was 2-for-2 on fourth down tries with a beautifully executed fake punt early in the third quarter that kept the 49ers from seizing momentum.

As good as Fitzpatrick was on Sunday, the running game had its lowest rushing total since the opener. The Dolphins managed just 94 yards rushing on a season-low 2.8 yards per carry. As a team, San Francisco had seven tackles for loss.

Miami also had its struggles against the run. San Francisco went for 131 yards on the ground on 6.9 yards per carry. Raheem Mostert did most of the damage for the 49ers with 90 yards on just 11 carries.

The Dolphins were more penalized than usual on Sunday as well, committing seven for 69 yards — both team-highs. Miami had two penalties on third down that kept a drive alive for the 49ers early in the second half, although a roughing the passer call was controversial. The penalties allowed San Francisco to find the end zone later on the drive.

After converting nearly half of its third down attempts through three games, Miami was just 4-for-12 on conversions on Sunday.

Miami didn’t get much in the return game. Jakeem Grant had just a long punt return of five yards and muffed a punt inside his own 20-yard-line. It could have been disastrous, but Grant managed to fall on the football.

With the win, Miami improved to 2-3. The Dolphins remained in third place in the AFC East behind the undefeated Buffalo Bills and New England Patriots. They now sit just a game back of the Indianapolis Colts and Las Vegas Raiders for the final playoff spot in the AFC.

The Dolphins were originally scheduled to visit the Denver Broncos next week, but due to positive COVID-19 tests, will now host the New York Jets. Former Miami head coach Adam Gase and the Jets will face the Dolphins on Sunday.

The Dolphins will be looking for their first home win of 2020. The contest begins at 4:05 p.m. ET and will air regionally on CBS.