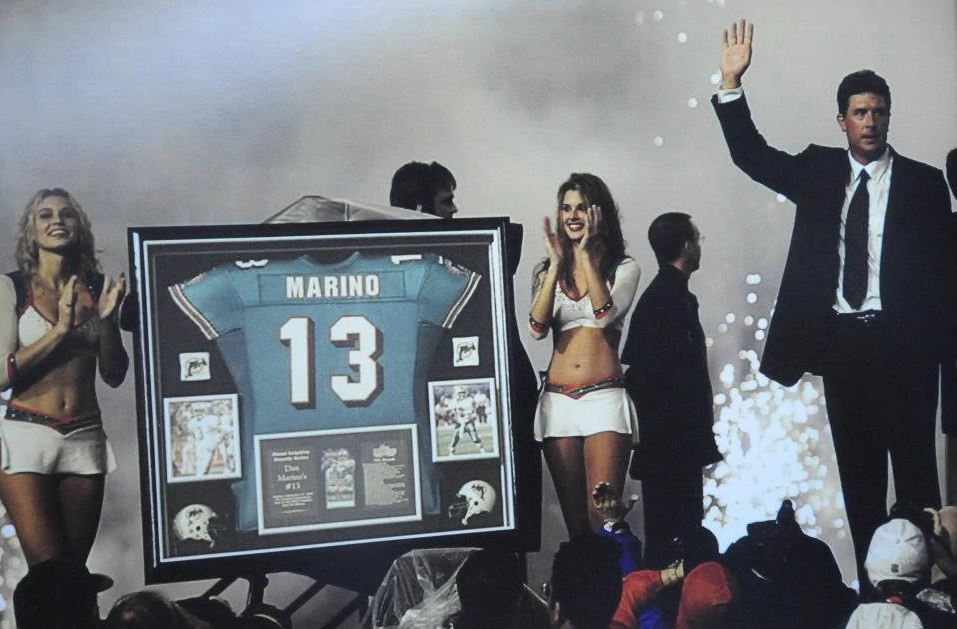 Ask any football fan who the most iconic player in Miami Dolphins’ history is and the overwhelming choice would be quarterback Dan Marino.

On this day 20 years ago, the Dolphins did their part to immortalize the all-time great. At halftime of a nationally-televised Sunday night contest between the Dolphins and Baltimore Ravens on Sept. 17, 2000, Marino’s iconic jersey No. 13 was retired.

The 27th overall pick in the 1983 NFL Draft, Marino would spend the entirety of his 17-year career in Miami. In just his second season in the NFL, Marino rewrote the single-season records books.

While earning league MVP in 1984 and leading the Dolphins to the Super Bowl, Marino passed for a record 5,084 yards and 48 touchdowns. The 48 touchdown tosses beat the previous NFL record by 12.

Over his 17 years with the franchise, the Dolphins finished with a losing record just once. When Marino retired at the end of the 1999 season, he was the NFL’s all-time leader in virtually every passing category. That included completions, yards and touchdowns. Only Johnny Unitas had more comeback wins.

On a night where one of the league’s greatest passers was honored, it was the defenses that stole the show. The Dolphins improved to 2-1 with a 19-6 victory over Baltimore.

A pair of Olindo Mare field goals gave Miami a 6-0 lead at the half. In the second half, the Dolphins traded touchdowns for Baltimore field goals. Lamar Smith scored the game’s first touchdown on a 7-yard run before scoring on an 8-yard pass from Miami quarterback Jay Fiedler.

Two Matt Stover field goals was all the Ravens could muster. Smith finished with 110 yards from scrimmage in the win.

For the Miami defense, Patrick Surtain recorded an interception in the end zone and returned it 43 yards to thwart a potential Baltimore scoring drive. Zach Thomas tallied a game-high 13 tackles for Miami while Jason Taylor finished with 2.5 sacks.

Jamal Lewis rushed for a game-high 76 yards for the Ravens in the loss. Ray Lewis recorded 11 tackles.

The victory for Miami began a 4-game winning streak. The Dolphins would go on to finish 11-5 and win the AFC East for the first time since 1994.

Baltimore fell to 2-1 with the loss, but would rebound to finish 12-4. The Ravens would go on to win the Super Bowl.

The six points scored against the Dolphins tied the fewest that Baltimore would score all season. For as good as the Miami defense was, the night belonged to Marino as he became just the third Dolphin to have his jersey retired. It happened on this day two decades ago.