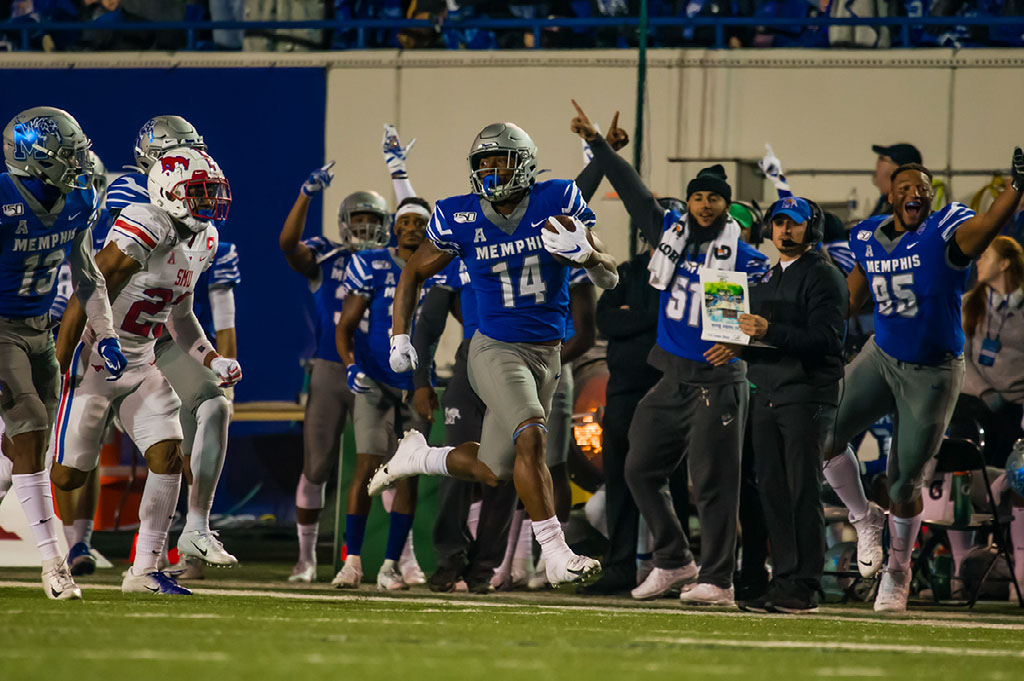 The first College Football Playoffs Rankings of the season were revealed last night. As expected, there’s a lot of debate about the top teams in the country and the order the committee put them in. As fun as that debate is, it’s not the only one.

The highest-ranked team from the Group of 5 (G5) conferences – the American Athletic Conference, Conference USA, the Mid-American Conference, the Mountain West Conference, and the Sun Belt Conference – will be invited to play in a New Year’s Six bowl. This year, it’s the Cotton Bowl. At 20th, Cincinnati has the high ranking, but they’re only one spot ahead of conference foe Memphis. Boise State (No. 22), Navy (No. 24) and SMU (No. 25) round out the rankings for G5 teams. Looking at each team’s remaining schedule, who truly has the upper hand?

The Bearcats only loss this season came against No. 1 Ohio State on September 7th. Cincinnati plays UConn next, but they shouldn’t have any issues with the 122nd-ranked team in the nation by SP+. Cincinnati’s schedule will get a little tougher to close out the season.

Cincinnati will first travel to South Florida to take on the Bulls. The Bearcats will return home for Senior Day against Temple, who has had their ups and downs. To close out the year, Cincinnati takes on Memphis on the road, which could be a preview of the AAC Championship a week later. If the Bearcats defeat the Huskies and the Owls, they lock up a spot in the championship game ahead of the Memphis game. To secure a Cotton Bowl berth, they’ll need to defeat the Tigers twice.

With wins already over SMU, Navy, and Tulane, Memphis already has a good enough resume to claim the Cotton Bowl spot. But their loss to Temple isn’t as respected as Cincinnati’s loss to Ohio State – likely the determining factor when ranking the two. As previously mentioned, the Bearcats and Tigers will play each other in Memphis on November 29. Before their game against Cincinnati, Memphis will face Houston and South Florida. The road matchup Houston shouldn’t be taken lightly. If Memphis wins out, they will earn the Cotton Bowl berth.

Boise State is the most respected out of all the candidates . They were the leader in the clubhouse until their 28-25 loss to BYU on October 25th. Despise the loss, the Broncos still have a chance to play in the prestigious bowl game. Boise State hosts the Wyoming Cowboys on the Blue Turf in a late-night showdown. If the Broncos can defeat the Cowboys, they will be significant favorites in their remaining three games against New Mexico, Utah State, and Colorado State. Assuming they win those games, the Broncos will have the San Diego State Aztecs waiting for them in the Mountain West Championship.

Out of all the ranked G5 teams, the Midshipmen have the most difficult schedule. Navy travels to South Bend to play Notre Dame after a bye week. They then play SMU, at Houston and, of course, Army. Navy has a tough path to navigate and will need a lot of help to play in the Cotton Bowl.

The Mustangs are coming off a tough loss at Memphis. Despite that, they’re still alive for the Cotton Bowl berth. If Memphis loses one of their remaining games, SMU would play in the AAC Championship and would have a chance to get into the Cotton Bowl. The Mustangs first host the East Carolina Pirates. They then travel to Annapolis to play Navy before closing the regular season against the Tulane Green Wave.