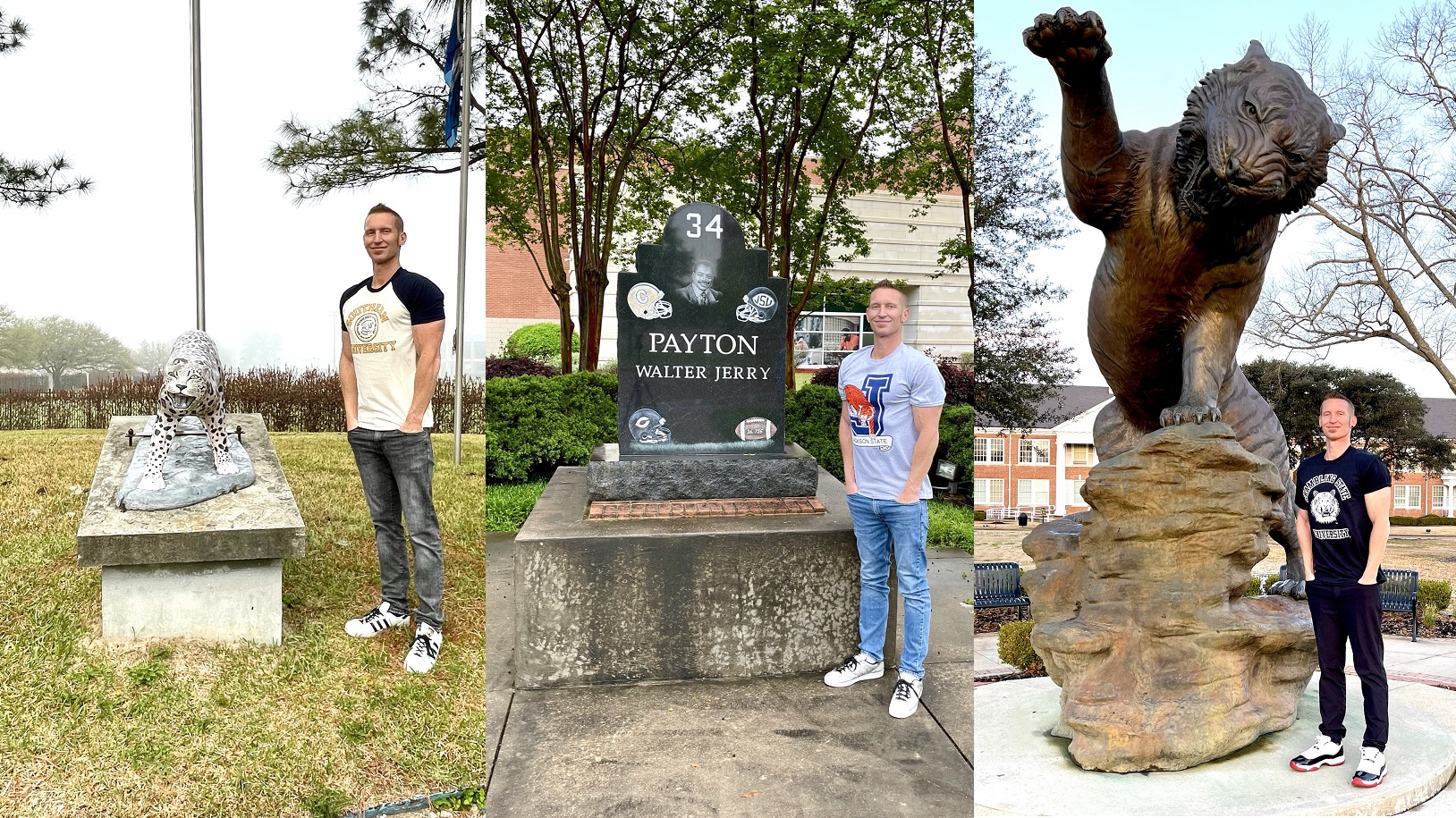 The decision to move the 2020 FCS football season to Spring 2021 aimed at increasing the chances of completing a full, interrupted year in the midst of COVID-19.  Though it was an imperfect solution with opt-outs, game cancellations and no fans in some locations, that goal was indeed accomplished.  Conference champions were crowned and a 16 team playoff bracket culminated in Sam Houston State winning their first FCS title.

The Spring FCS season also presented a unique opportunity for a self-described “game traveler” such as myself.  Division I football has 258 teams: 130 FBS football schools and 128 FCS schools.  With only 13-15 Saturdays each Fall season, it’s impossible to attend all the games I’d like to.  So given the chance to focus solely on FCS for a 3-4 month period was something I took full advantage of.

The vast majority of my travels were to the South.  The Northeast, Midwest and West were either not playing or not allowing fans.  Most of the South, by contrast, was both playing and allowing fans.  The OVC (Ohio Valley Conference), SoCon (Southern Conference), The Big South and the SWAC (Southwestern Athletic Conference) all offered games in the region.

The SWAC really piqued my interest.  Over the years I’d visited many SWAC stadiums during my travels.  It’s amazing to think about the conference’s rich football history and the countless NFL Hall of Famers who played for these universities.  Jerry Rice, Walter Payton, Deacon Jones, Mel Blount, Willie Brown…the list is almost endless.  I was beyond thrilled to finally catch actual games at some of their most significant stadiums.  Additionally the OVC played many Sunday games during the Spring, so I wanted to see Tennessee State play a home game in Nashville as well.  My Spring 2021 slate was as follows:

Talk about a murderer’s row of incredible stadiums!  New ASU Stadium in Montgomery is probably the “nicest” looking venue in the SWAC (Prairie A&M & UAPB are right there too): 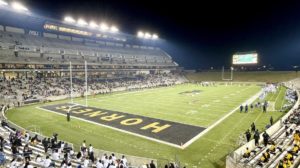 The energy at Eddie Robinson Stadium (aka ‘The Hole’) was electric for the Grambling-JSU game.  Watching Alabama A&M’s QB Aqeel Glass put up over 400 yards and 5 TDs at ‘The Vet’ in Jackson was an incredible sight.  And getting to see him do it twice more, first at the Magic City Classic and then at the SWAC Championship game, convinced me he was the best quarterback I’d seen all Spring.

It wasn’t just seeing the stadiums and talented players that made it so great though.  It was my interactions with HBCU/SWAC enthusiasts.  Getting the opportunity to talk with passionate fans at the games was really a lot of fun.  Social media played a huge role as well and Twitter was where I formed the best connections with the HBCU community.  I was able to interview several of the most well-known HBCU personalities over Zoom during the Spring season:

Building on the momentum from the Spring, I was very excited for the Fall season.  Though we were back to both FBS and FCS playing full schedules, I made HBCU games a high priority.  Here’s what my Fall 2021 HBCU football schedule looked like:

The difference between the Spring and Fall was full stadiums.  The bands were back and tailgating was in full force.  A true, authentic snapshot of what HBCU football is all about.  There were so many highlights for me, too many to list them all in fact.  Here’s some of my best experiences summarized: 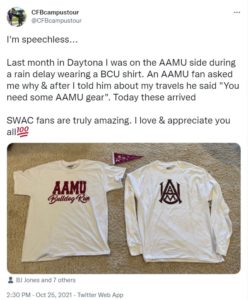 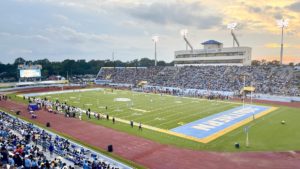 I could go on and on, as there are countless other stories which demonstrate how much fun I had in 2021 following HBCU football.  In total, I went to 13 games and have now seen a game at 7 of the 12 SWAC football schools:  Alabama State, Bethune-Cookman, Grambling, Jackson State, Prairie View, Southern and UAPB.  Remaining are Alabama A&M, Alcorn State, Florida A&M, Mississippi Valley State and Texas Southern.  I’ve also seen games at 3 MEAC schools (Howard, Morgan State & Norfolk State) and now have Delaware State, NC Central and South Carolina State remaining.  Not to mention North Carolina A&T and all of the ‘Classics’.  I’ve been to the Magic City Classic, but not other games such as the Bayou Classic, Orange Blossom Classic, Florida Classic.  Commission McClelland told me that the Bayou Classic is like a Super Bowl atmosphere inside the New Orleans Super Dome, but with 100,000+ people outside of the game as well.  That paints quite a vivid picture.

The only reason I was able to even begin to immerse myself in the HBCU football community is because the Fall 2020 season was moved to Spring 2021 due to COVID-19.  A blessing in disguise.  I knew at minimum that I would get to see some extra football games, but I never imagined all of the positive experiences that would come along with it.  Literally life altering interactions that have reshaped my goals as a college football fan and “stadium traveler”.  I know the 2021 HBCU football season just ended a couple weeks ago with South Carolina State’s victory in the Celebration Bowl, but I can’t wait for Fall 2022.  Looking forward to adding more great experiences in some new places.  The off-season cannot go by fast enough!