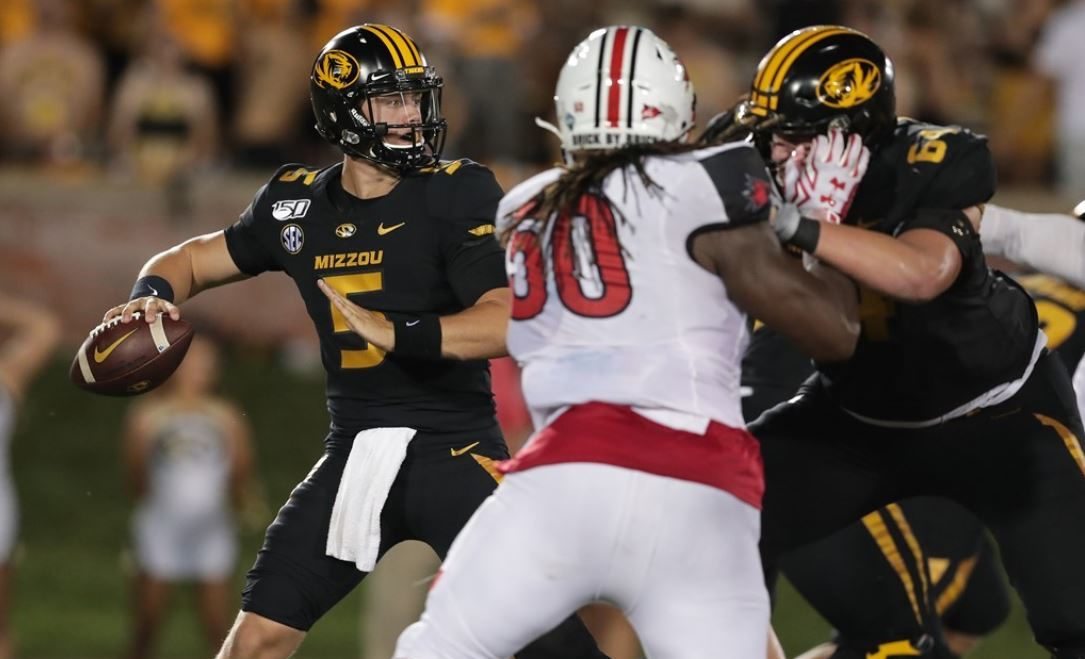 New Missouri head coach Eliah Drinkwitz said it best in a press conference in early June: “[The quarterback position], to me, is probably the biggest question mark on our football team right now.”

In Drinkwitz’s eyes, Missouri has four capable quarterbacks on the roster coming into the 2020 season.

With team workouts shut down due to COVID-19 in March, the Tigers were only able to get back together as a team for voluntary workouts in June. Mandatory team workouts began on July 13 and question marks still surround the season.

Both the Pac-12 and Big Ten Conferences have already shifted to schedules made up of only in-conference games. SEC schools will meet in late July to discuss whether they will follow suit. SEC Commissioner Greg Sankey expressed that public health trends must start to head in the right direction in order for college football to be played.

Missouri is fully prepared to begin the season at home against Central Arkansas on Sept. 5. Coach Drinkwitz has made it clear that the Tigers are getting ready for business as usual. Regardless, a potential cancellation of the 2020 season lingers in the back of the minds of players, staff and fans.

If the season continues as planned, one of Missouri’s four talented quarterbacks of will be named the starting signal caller.

The lineup of QB1 candidates looks something like this in order of likeliness to earn the job:

Shawn Robinson is the most promising candidate to take the starting job for the Tigers this fall. Robinson, formerly of the TCU Horned Frogs, is a talented dual-threat quarterback.

A member of the recruiting class of 2017, he was ranked a four-star recruit. The 247Sports Composite lists him as the No. 6 dual threat quarterback and No. 198 recruit in his class. He threw for 7,646 yards and 75 touchdowns and rushed for 4,452 yards and 53 touchdowns in three years of varsity football for DeSoto High School in Texas. His dominance earned him a selection to the U.S. Army All-American Bowl.

At TCU, Robinson saw just 50 snaps in 2017, completing 13 of 27 passes for a total of 184 yards, three touchdowns and no interceptions. His ability to throw the deep ball and be dangerously mobile was immediately evident. His longest completion was for 56 yards. The freshman rushed 23 times for 159 yards, including a 41-yard run at Texas Tech.

In 2018, Robinson stepped into the spotlight for the Horned Frogs, but was limited to seven games after a shoulder injury ended his tenure in Fort Worth. The seven-game stretch featured match-ups against Texas, Ohio State and Oklahoma. The young quarterback held his own, throwing for 1,334 yards, nine touchdowns and eight interceptions, while rushing 43 times for 230 yards.

Robinson sat out the 2019 season at Missouri due to transfer rules, but is ready to go in 2020. Among the new coaching staff is Robinson’s former co-offensive coordinator at TCU, Curtis Luper. Luper is now Missouri’s running backs coach.

It would be no surprise to see Robinson win the job for the Tigers. He is a confident pocket passer with a strong deep ball. He has the ability to stay calm and move through his reads downfield and make solid throws. When no read is available, the 6-foot-2, 220-pound quarterback can quickly escape the pocket and dart downfield.

Connor Bazelak was one of the bright spots for the Tigers in a tough 2019 season. Although he suffered an ACL tear in the final game of the year vs. Arkansas, Bazelak is ready to prove he is a capable SEC quarterback.

The Dayton, Ohio native chose Missouri as his new home over a number of strong football programs, including Georgia, Wisconsin, Tennessee and Kentucky. Bazelak was rated a four-star recruit and the No. 13 pro-style quarterback in the country, according to the 247Sports Composite.

He found himself in the game again for the majority of the fourth quarter at Sanford Stadium in Athens. After Taylor Powell had struggled to get the offense going against Georgia, Bazelak stepped in with about 11:30 remaining in the game with the scoreboard reading 27-0 in favor of the Bulldogs.

Bazelak was a breath of fresh air for the Tigers’ offense, though, completing eight of 12 passes for 64 yards. He was only in command of the offense for one drive, but drive he did. Missouri marched inside the Georgia 2-yard-line, but a defensive line that had not let up a rushing touchdown all year was determined not to let Missouri be the first to do so in Week 11.

In Bazelak’s final appearance and first career start, the true freshman ended his season early on a seven-yard run to the sideline just two minutes into the second quarter against Arkansas. He exited the game with seven completions on nine throws for a total of 80 yards.

As for that ACL, Bazelak was back to practice as a limited participant in March, and has continued to progress since. In response to well wishes, Bazelak tweeted the following:

Thank you! I’ll be ready to go for next season!

Bazelak’s game is very good. Teammates and former Missouri coaches described him as the “best arm on the team” as just a freshman. He puts plenty of zip on the ball and is a fantastic pocket passer. While his deep ball has not been on display for the Tigers yet, Bazelak leads his receivers very well and can read the field confidently.

He did a very good job finding a few screen passes to Larry Rountree III and Tyler Badie. Bazelak shined on his quick routes to the inside for seven to 11 yards. His connection with now redshirt junior Barrett Banister may be a deadly one in the SEC for seasons to come. The speed and accuracy with which he throws the ball will serve him well, and the experience will come with time.

He may not have the experience of Shawn Robinson, but don’t count him out. Bazelak is a strong contender for the position.

Taylor Powell was the established backup to graduate transfer Kelly Bryant during the 2019 season. He was given the opportunity to feature in a number of games for the Tigers. His only start came against Georgia, where he completed 10 of 22 passes for just  84 yards against a suffocating Georgia defense.

His best moment of the season came in the final game against his hometown Arkansas Razorbacks. Powell came into the game in the early second quarter with the teams tied, 7-7. In his best performance of the year, he completed 8 of 14 passes for 105 yards. He ended with one touchdown and one interception, but the effort was good enough to end a five-game losing streak and give the Tigers a .500 finish.

Powell, from Fayetteville, Ark., was a three-star recruit coming out of high school. He chose Missouri over Alabama, Illinois, Arkansas and Vanderbilt, among others. In two years of varsity football, Powell recorded 2,066 passing yards and 20 touchdowns — all while throwing just six interceptions.

He hasn’t had his breakout game for the Tigers, but Powell has the tools to be a fantastic pocket passer. He has the ability to read the linebackers and safeties very well in run/pass option scenarios, and throws a nice, but inconsistent, deep ball.

Coach Drinkwitz was very clear that he believes every single one of the quarterbacks on the roster is capable of taking the job this year. There is no reason to leave Powell out. In fact, there is no quarterback on this list with more experience in a Missouri Tigers jersey than Taylor Powell.

The final quarterback on the Tigers’ roster is Brady Cook, a true freshman from St. Louis. Cook is ranked as a three-star recruit and the No. 29 pro-style quarterback in the class of 2020 by 247Sports. He played 36 games at the varsity level in high school, with two seasons as the full-time starter.

Missouri offered Cook before his 2018 junior year season, and many doubted the offer as the year went on. He threw for 1,795 yards, 14 touchdowns and 12 interceptions with a completion percentage of 53.1 percent. During his senior year, Cook proved himself, showing off his athleticism, arm power and intelligence in the pocket.

He threw for 3,194 yards, 33 scores and just seven interceptions in 2019. In addition, he earned the title of first team All-State punter, averaging 49.3 yards per kick. It’s safe to say he ended his high school career fashionably.

At 6-3, Cook is tied with Bazelak as the tallest quarterback on Missouri’s roster. He may be a true freshman, but he has already proven himself to the new coaching staff. He has the talent, work ethic and motivation to be a contender as the quarterback battle begins.

There are just about seven weeks left until Missouri opens the season at home against Central Arkansas, and the Tigers have lots of work to do until that point. No matter who is at the helm of the offense, though, the offense will thrive under Coach Drinkwitz. There is no doubt that the man who gets the job will be the right one.