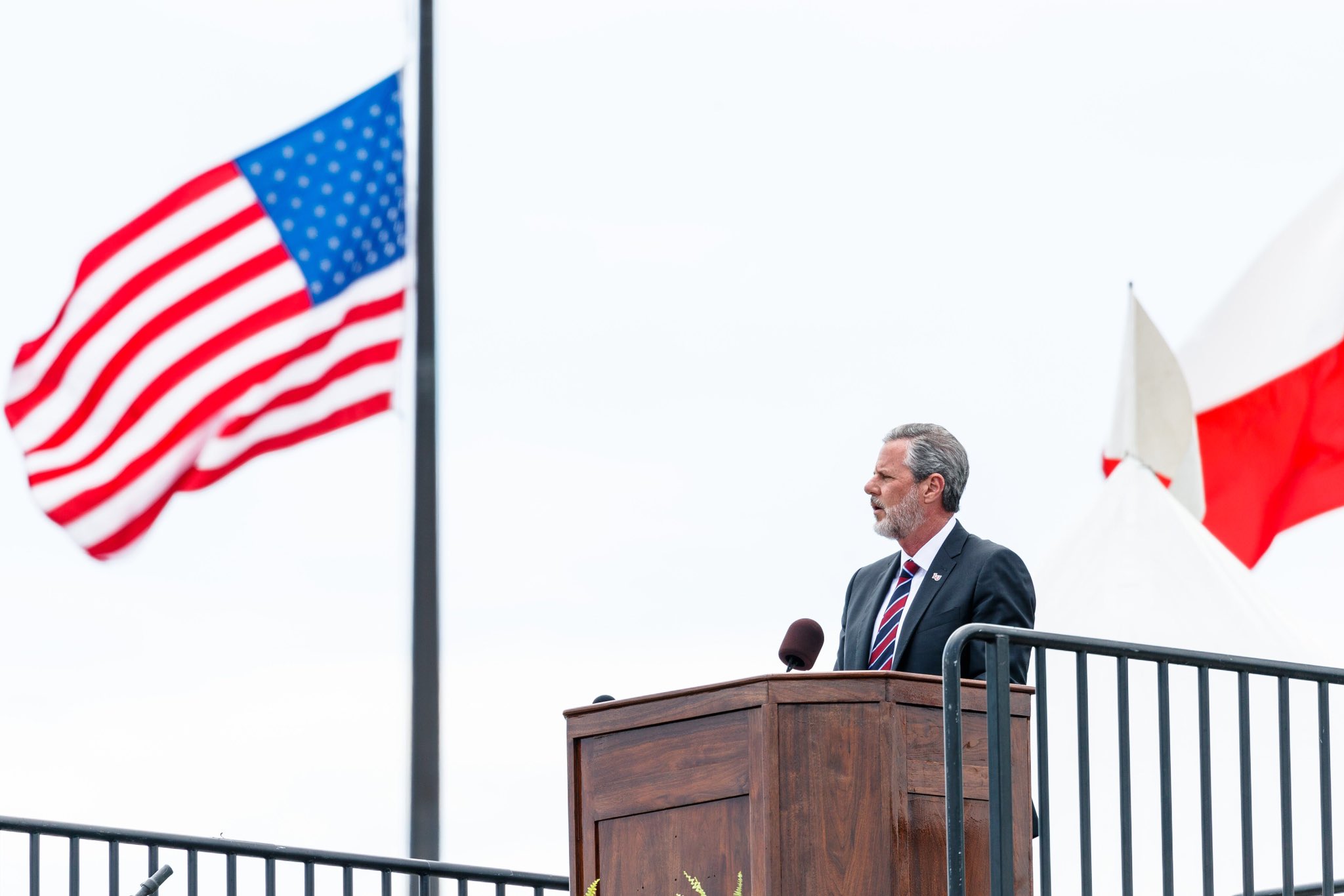 Jerry Falwell, Jr., president of Liberty University, is a very controversial figure. That’s probably not news to you. How you stand on the controversies will, however, determine how you feel about him.

In light of the recent killing of George Floyd and Virginia Governor Ralph Northam’s mandate that all Virginia’s should wear masks in public to help prevent the spread of COVID-19, Falwell reacted thusly:

Not the most flattering of facial coverings.

If you’re not aware, the image on the mask is from one of Northram’s old yearbooks. It depicts the Virginia governor in blackface, alongside someone in KKK garb. Falwell decided to have a mask made of this ludicrous image. This is distasteful and extremely unbecoming of the president of a major university.

Liberty sits in Lynchburg, Virginia, a city that, per its own website, is 28.4% African-American.

That does not bode well when you are trying to appeal to recruits. Especially when the majority of your team is African-American.

All of this contributes to a potentially toxic environment as the Flames football team comes on the heels of coach Hugh Freeze’s first season. Freeze led the Flames to their first bowl game and subsequent bowl win in 2019.

Football (and Liberty’s new $25m football facility) aside, there is no reason any of us should know Falwell’s political leanings. With his repeated offenses towards segments of the population, along with appearances on TV mocking Coronavirus, he has made his stance obvious to the general public.

The fallout from Falwell’s terrible choices has already begun, as one Liberty professor, resigned Friday.

Yes I did resign today from teaching an online course for Liberty University! As a Black pastor and scholar who does work on racist memorabilia, I am disgusted at Falwell use of Blackface and KKK outfits. This does not represent the God of the Bible! pic.twitter.com/FC1Yh75GNj

“The college (Liberty) is no longer at the top of his choice of schools. My husband would not want him to attend and I would support my husband,” An anonymous parent of a student-athlete being recruited by Liberty said. “I would allow the recruiters to come to our front door. The recruiters would have to change our minds.”

“Other parents are saying that they do not want me to take their kids there until further notice,” a prominent youth football coach and father of two college athletes said. “It’s unfortunate because the football coaching staff at Liberty really are a great group that I’ve built very good relationships with.”

When asked if he would encourage his child to attend Liberty, a coach within Liberty’s general area said simply, “No, but as a coach, yes. I have to remove my personal views and reasoning. I wouldn’t want to deprive a kid an opportunity for himself and his family, as it is their choice.”

A number of fans on Twitter have said they will not support the school or athletic department until something is done about Falwell. Some students are transferring. There has also been backlash from fans of future Liberty opponents, calling for their schools to cancel their agreements. None have been announced as of writing, but schools may take some time to make sure they are legally allowed to do so.

“It’s crazy and embarrassing,” someone connected to Liberty athletics said.

“As an alum, I am angry at how leadership has misrepresented what Liberty University has grown to stand for,” an alum and current college head coach said. “As a black man who grew up in Lynchburg, I’m disappointed Falwell, Jr. continues to drive a racial divide between the city and Liberty.”

What Needs to Happen

With a $1.59 billion endowment, Falwell is the president of a school with plenty of financial resources.

Falwell does sit on the school’s board of trustees. It would ultimately be up to them to remove Falwell from power. Doing so, though, may incur more outrage from students and possibly a loss in funds to the university.

“Denounce that activity,” a coach within Liberty’s general area said.

“I believe the board of trustees should really ask if this is the direction they want their academic institution to go in and make a vote,” A parent of a student-athlete being recruited by Liberty said. “I don’t want my child attending a college that doesn’t want him other than to play a sport. However, only time will tell if other athletes feel this way and their African-American recruitment drops.”

At time of writing, coach Hugh Freeze has not made a statement on the George Floyd murder. He has retweeted statements from Tony Dungy and Carson Wentz.

If Liberty really wants people to “#RiseWithUs”, they will do something about Falwell and his opinions.

Both S Tayvion Land and CB Kei’Trel Clark have announced that they will transfer from Liberty as a result of Falwell’s continued racism.

Land played in nine games as a freshman and had 23 solo tackles. Clark played in 12 games and had 37 solo tackles to go with a TFL and a sack.

*Announcement* I have entered my name into the transfer portal I will no longer be attending Liberty University please respect my decision ✊🏿. pic.twitter.com/HmsHD7DeRJ