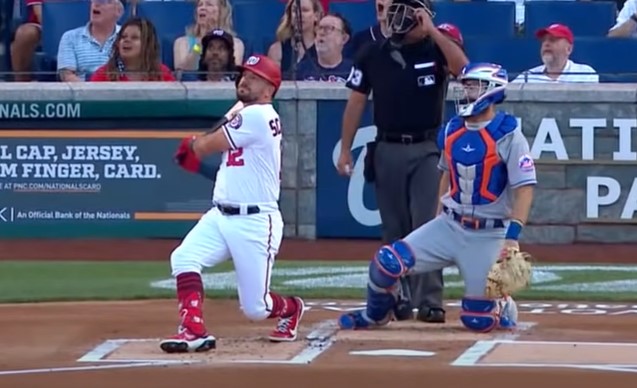 The 2021 season has been one with many ups and downs.

For the Washington Nationals, it has had more downs than ups, and in this case, they might be looking to better themselves in the future. The recent run from the team and Kyle Schwarber has been fun and exciting, but still not really enough to make them into real contenders.

The farm system is barren. When going all in for about seven years in order to win a World Series, that will happen. The Nationals need what is called a soft reboot.

That basically means that they trade off the veterans and let the young guys play all while not fully tanking. Luckily for the Nats, they are the oldest team in Major League Baseball, so they have plenty of veterans who can be flipped to a team in exchange for prospects and players to reload the minor league system.

The biggest one is the easiest one to cover. When the Nats brought in Schwarber, it was on a simple “prove it” type deal. It was a low risk, high reward move that has paid off. Schwarber’s recent run of 16 home runs in 19 games means that his trade value is arguably as high as ever. The Nats need to maximize that.

He is not going to always be hitting like this, and everyone knows it. Eventually, he will cool off. Furthermore, there is next to no one on the roster who can attract more suitors. Schwarber is not a great left fielder, but certainly fields well enough to not be a liability. He can be used as a designated hitter or play in the field. That makes him an option to teams in both leagues. Look for teams struggling offensively to touch base with the Nats if they decide to sell off pieces.

Corbin has been a great signing for the Nationals. In his time in DC, he has helped them win a World Series and really filled the left-handed void in the rotation. The Nats have some prized prospects in the pipeline and Corbin’s contract will only get more and more difficult to move. Compounding on this is the poor play he has endured this season. He has struggled, although regained his footing to a certain degree. Still, he can help a team with marginal pitching and be a stabilizing presence on a pitching staff.

To be clear, Castro is one of the more likely players to get traded on this list. He is in the final year of his contract, has not played amazingly, and the Nationals have prospects waiting in the wings behind him. It just makes sense. Castro has flashed his elite contact skills, but probably is best suited as a platoon guy on a high-caliber team.

Hand is also on an expiring contract, and he really can help a team in the postseason. Not only is he a lockdown closer, but he is a lefty. That makes him better suited to play match-up baseball in late innings. Hand has been very good for the Nats, but his rebound year likely means that the price tag will go up for him in the offseason, should he remain with the team. The Nats might as well get something for him if they truly believe they won’t be able to re-sign him.

Others on the Trade Block

Harrison has been so fun to watch. The problem is that he keeping the club’s second baseman of the future, Luis Garcia, from taking over the job.

Age and injury concerns might force the Nats to get whatever they can for him.

Lester would not be getting traded due to his on-field performance, but rather, his presence in a locker room. This might be the last rodeo for the southpaw, so might as well allow him to win some games down the stretch.

Whether or not the Nats trade any of these players remains to be seen. The team has been trending up and it appears as if they might buy instead of sell. Only time will tell if that is a good move or not.

Still, if the Nats go all in and lose out on the postseason and give up assets, it will not be a good look. No matter what the team does this trade season, it will be a positive. Either they go all in and make a push or they help out the farm system and make it more plausible that they can win in the future.