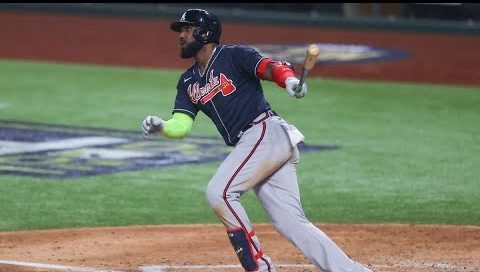 Marcell Ozuna and the Atlanta Braves will again have each other for the 2021 season.

The Braves re-signed the slugger on Friday to a 4-year, $65 million dollar contract with a fifth-year team option. After an explosive 2020 season on a one-year “prove it” contract, Ozuna signed a multi-year contract that he more than deserved. Last season, Ozuna led the National League in home runs and RBIs, while maintaining a .338 batting average and a .431 on-base percentage.

Ozuna’s impact to the Braves’ organization extends beyond the batter’s box. In Game 3 of the National League Championship Series, the Dodgers destroyed Kyle Wright in the first inning, scoring 11 runs. Los Angeles went on to win that game 15-3.

Spirits were low in the clubhouse the next day. Players went about their pregame routines quietly. They may have felt their chances were growing slim. They going to face Clayton Kershaw that night with Bryse Wilson, an unproven young pitcher, set to take the mound for the Braves.

Then, Ozuna took control of the clubhouse.

Ozuna led a dance party, getting the players out of their heads and putting smiles on their faces. Ozuna’s leadership loosened up the guys. On the field, he took matters into his own hands by hitting two home runs, as the Braves took Game 4 by a 10-2 margin.

Obviously, the next three games didn’t go as planned, but Ozuna’s value in 2020 should not be underestimated. One major reason that Freddie Freeman was able to win National League MVP is because Ozuna was hitting behind him. When asked about winning MVP, Freeman said, “With Marcell behind me and Travis (d’Arnaud), I got some pitches to hit, and I was able to hit this year.”

Freeman was one of the first Atlanta players to voice his excitement about Ozuna’s resigning via Twitter.

As of now, it appears Ozuna will be the Braves’ starting left fielder. His position may change if the MLB Player’s Association and the owners agree to add the designated hitter for next season. Talks are still ongoing.

Ozuna thrived in the DH role last season, winning the Edgar Martinez Award for best DH in the league. He became the first NL player to win the award. If the DH is brought back, the Braves may look to re-sign Adam Duvall or bring in Yasiel Puig to play left field.

As things stand, the Braves will deal with Ozuna’s somewhat sloppy defense in the field. His bat more than makes up for the occasional error or poorly tracked ball. With Cristian Pache’s seemingly limitless range in center field, Ozuna won’t need to cover as much ground.

Ozuna’s contract is built is such a way that he only will make $12 million this season. This is a steep drop off from his $18 million in 2020. This pay cut should give the Braves more room to operate this offseason.

The Braves could certainly add a pitcher or two to their bullpen. Mark Melancon and Shane Greene are still free agents and would be welcomed back with open arms. Some alternative talented arms remain on the open market as well, including Brandon Workman, Roberto Osuna, and many more.

Regardless, the Braves have improved their starting rotation, while maintaining their potent lineup this offseason. Atlanta looks ready to fight for its fourth straight division title. The Braves should make another playoff run with Ozuna batting in the middle of their lineup.