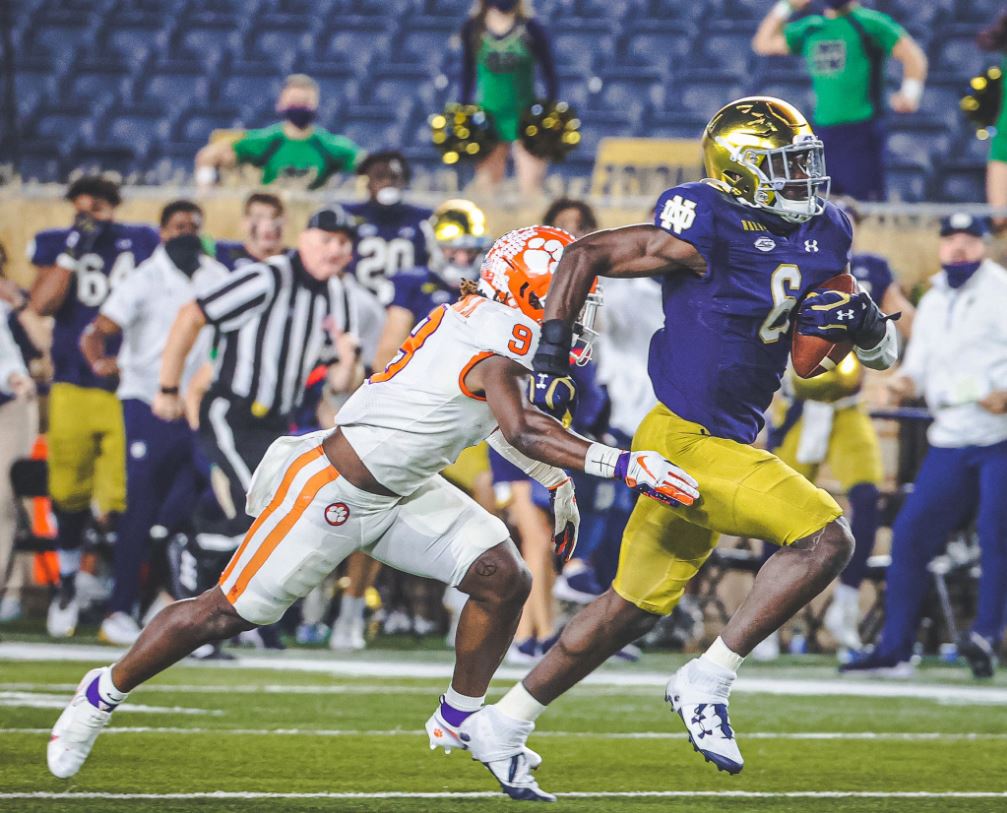 The ACC’s giant was slayed on Saturday night.

In a match-up of top-5 teams, Notre Dame made a major statement in South Bend. The No. 4 Fighting Irish needed two overtimes, but outlasted top-ranked Clemson in a 47-40 thriller.

Following Saturday’s monumental victory, Notre Dame gets some love from Fifth Quarter. The Fighting Irish are the Team of the Week for Week 10.

For the first half, things looked great for Notre Dame. The Fighting Irish forced two turnovers and raced to a 23-13 halftime lead.

In the second half however, Clemson had outscored the Fighting Irish 20-3 and pinned Notre Dame deep with less than two minutes remaining. Quarterback Ian Book calmly marched Notre Dame 91 yards to tie the score 33-33 and force overtime.

Notre Dame tied the game on Book’s 4-yard touchdown pass to Avery Davis with 22 seconds remaining. Book passed for 310 yards and rushed for 68 more in the victory.

In overtime, Clemson needed just two plays to go back in front on a 1-yard touchdown run by quarterback D.J. Uiagalelei, who was replacing starter Trevor Lawrence. As was the case at the end of regulation, Notre Dame had an answer.

Notre Dame needed four plays to draw even as Kyren Williams scored from three yards out to force a second overtime. In the second overtime, the Fighting Irish overcame an early holding penalty as Book found Ben Skowronek on a critical third down to keep the drive alive. Williams, who finished with 140 yards rushing, scored his third touchdown of the night to put Notre Dame ahead for good.

It was the Fighting Irish defense that did the rest.

Back-to-back sacks from Adetokunbo Ogundeji pushed Clemson back to near the Notre Dame 40-yard-line. After an incomplete pass on third down, Braden Galloway was corralled well short of the first down and was unable to find a teammate to lateral to.

The win for Notre Dame was its first over a No. 1 team since 1993. That year, the Fighting Irish topped Florida State in a contest of No. 1 vs. No. 2 dubbed the “Game of the Century”.

The defeat snaps a streak of 29 straight ACC wins and 15 straight road victories. Winning on Saturday would have bested Florida State’s record for consecutive ACC wins set from 1992 to 1995. The Tigers will have to settle for tying the record.

With the victory on Saturday night, Notre Dame improved to 7-0 on the season and 6-0 in ACC play. The Fighting Irish can clinch a spot in the ACC Championship with three wins in their final four games.

The last time that Notre Dame beat a No. 1 team, it lost the following week to Boston College. This week’s opponent?

The Eagles are 5-3 on the year and 4-3 in ACC play following a 16-13 victory at Syracuse. Boston College nearly ended Clemson’s streak the week prior, racing to an 18-point lead before falling to the Tigers on the road, 34-28.

Saturday’s contest between the Fighting Irish and Eagles begins at 3:30 p.m. ET. It will air on ABC.