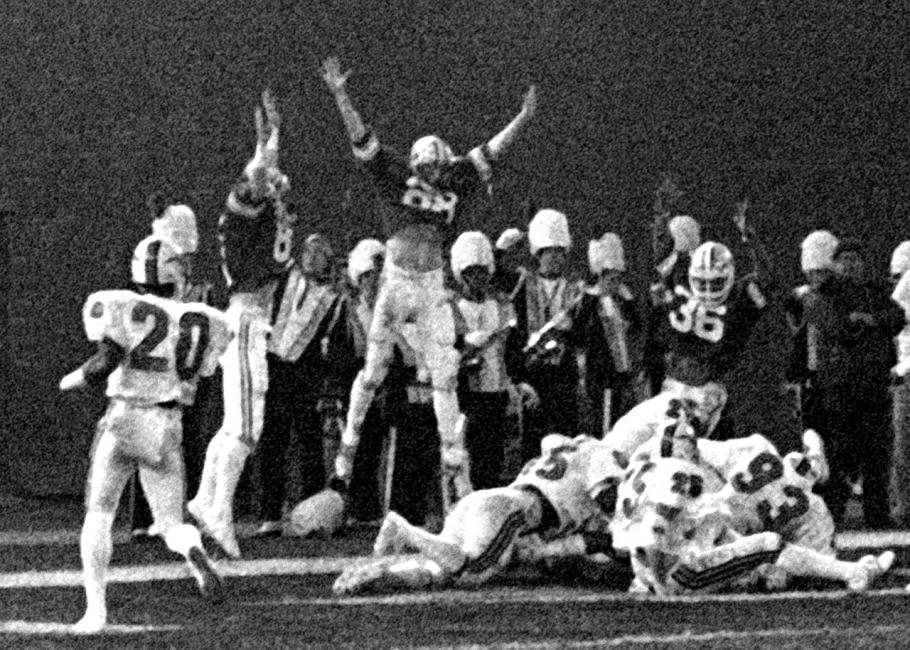 Over the years, there have been some thrilling bowl finishes. One of the most unlikely came on this day 40 years ago.

In a top-20 match-up to cap the 1980 season, BYU looked dead in the water against SMU in the Holiday Bowl for most of the night. At the end, a 41-yard Hail Mary pass from Jim McMahon to Clay Brown helped erase a 20-point fourth-quarter deficit as the Cougars topped the Mustangs, 46-45.

BYU had won a third straight outright WAC title and was ranked No. 14 in the country as it arrived at Jack Murphy Stadium in San Diego on Dec. 19, 1980. The Cougars were 11-1. After an unthinkable loss to New Mexico to open the year, the Cougars had won 11 straight games.

SMU was 8-3 and ranked No. 20 as it arrived. Following a 4-0 start, the Mustangs went 4-3 to close the regular season. Until the game’s final seconds however, it appeared that it would be their night.

Throughout the contest, SMU led virtually the whole way. The Mustangs’ lead was as high as 22 and with less than three minutes to go, it was 20.

As time ticked away on an inevitable loss, the Cougars trailed 45-25 when McMahon capped a 72-yard drive with a 15-yard touchdown pass to Matt Braga. The 2-point conversion attempt was no good, but it didn’t appear as though that would matter much.

BYU didn’t take long to capitalize on the opportunity. Following a 40-yard completion, Scott Phillips scored from a yard out with 1:58 remaining. McMahon then found Phillips for the 2-point conversion to pull the Cougars to within six at 45-39.

SMU recovered the ensuing onside kick to seemingly cement the victory, but with just seconds to go, the Cougars forced a punt. BYU’s Bill Schoepfl managed to get a hand on Eric Kaifes’ kick as BYU started at the SMU 41-yard-line.

After two incomplete passes from McMahon, the contest came down to one play. McMahon backpedaled past midfield before heaving one for the end zone. Surrounded by SMU players, Clay Brown was the only Cougar in the area. Somehow, the pass found his hands for the touchdown as time expired.

With no time on the clock and the scoreboard showing a 45-45 tie, all kicker Kurt Gunther had to do was make the extra point. He did his job as the Cougars did the unthinkable.

Behind a touchdown from Eric Dickerson, two from Craig James, a field goal and a safety, SMU raced to a 29-7 lead. BYU’s first touchdown was also a connection from McMahon to Brown — this one 64 yards.

BYU was able to cut the lead to 16, thanks to an 83-yard punt return for a touchdown from Vai Sikahema and a second touchdown pass from McMahon to Brown. That was sandwiched around Dickerson’s second touchdown. On all three scores, the conversion attempts were failed.

SMU pushed the lead to 38-19 on Eddie Garcia’s 42-yard field goal before Phillips scored his first rushing touchdown for the Cougars. With 3:58 to play, James looked to have put the game away with his third touchdown of the night — a 42-yard scamper.

James finished with 225 yards rushing for an SMU team that went for nearly 400 yards on the ground. McMahon passed for 446 yards on a night where the Cougars rushed for negative-2 yards. McMahon threw four touchdowns. Three of those went to Brown, who finished with a game-high 155 yards receiving and three scores on five catches.

The improbable victory gave BYU a then school record 12 wins and a No. 12 final ranking. SMU remained at No. 20 in the final polls. Despite the disheartening finish, it was the first ranked finish for the Mustangs in 12 years.

The victory remains arguably the greatest comeback in bowl history and perhaps college football history. BYU fans refer to it as the “Miracle Bowl”.

It took place on this day four decades ago.