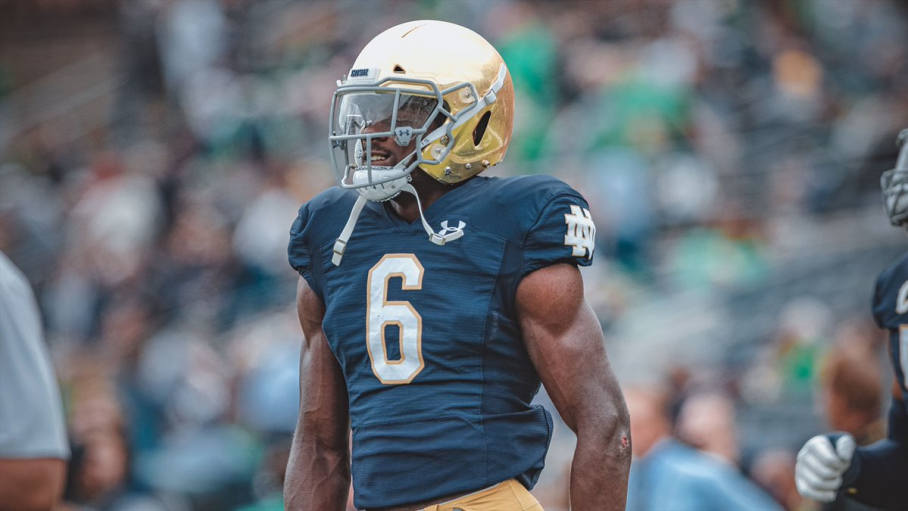 Week 10 of the college football season featured the much-awaited return of Pac-12 and MAC conference play as well as four top-25 match-ups. Two of those match-ups provided players for this week’s list.

The AAC, ACC, and Pac-12 led the charge on the defensive and special teams sides of the ball, with all three featuring multiple players on this week’s list. The Big Ten, MAC, SEC, and Sun Belt each contributed one player to this week’s list.

We previously looked at the top five offensive performances from Week 10. Florida and Notre Dame had players represented on both lists this week. Here are the top five statistical performers for each defensive and special teams category:

LB Jeremiah Owusu-Koramoah, Notre Dame
Owusu-Koramoah was such an important piece to the Fighting Irish’s big 47-40 upset over No. 1 Clemson in double overtime. He had nine tackles, a half sack, one forced fumble, and one fumble return for a touchdown. He becomes the first Notre Dame player since at least 2000 to have nine or more tackles, one forced fumble, and a fumble return for a touchdown in a single game. Oregon’s Brady Breeze and Middle Tennessee State’s Gregory Grate Jr. are the only other two players to accomplish that feat this season.

DE Tarron Jackson, Coastal Carolina
Jackson was a key part of the Chanticleers’ defense that held South Alabama to just six points this game. In a 23-6 win, Jackson had 10 tackles, 2.5 sacks, and a forced fumble. He becomes the only Coastal Carolina player since at least 2000 to have 10 tackles or more, 2.5 sacks, and a forced fumble in a single game. The only other Sun Belt player in the conference’s history to accomplish this feat was Louisiana Monroe’s Cody Robinson. Robinson did so in 2015. 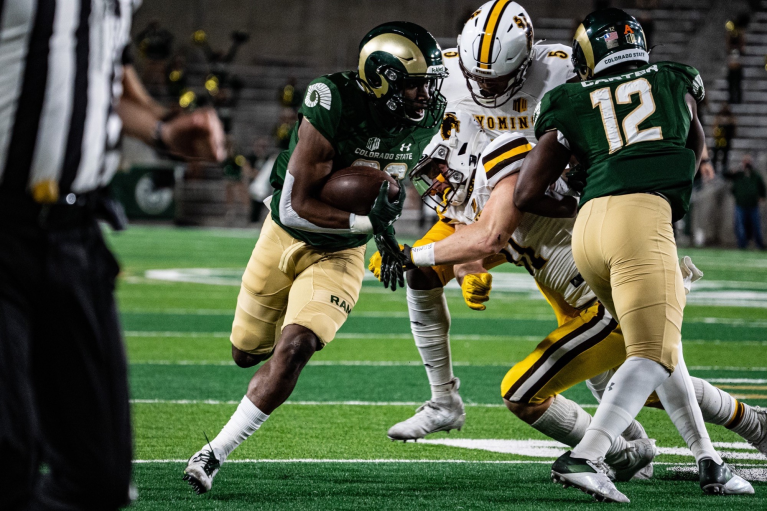 Marshaun Cameron was a force to be reckoned with in Colorado State’s 34-24 win over Wyoming. (Colorado State athletics)

DB Marshaun Cameron, Colorado State
The senior defensive back was all over the field in Rams’ 34-24 win over Wyoming. Cameron recorded 10 tackles, one sack, one interception, one pass defended, one forced fumble, and one interception return touchdown. He becomes the only non-Power 5 player since at least 2000 to have 10 or more tackles, one sack, one interception return for a touchdown, one pass defended, and one forced fumble in a single game. The only other player to accomplish this feat since 2000 was BYU’s Bryan Kehl in 2007.

DE Patrick Johnson, Tulane
Johnson continued his dominant season by playing a huge role in the Green Wave’s 38-21 win over East Carolina. Johnson had six tackles, three sacks, two forced fumbles, and one pass defended. He becomes the only player in American Athletic Conference history to record three sacks, two forced fumbles, and a pass defended in a single game. Johnson now has nine sacks on the year. That leads the country this season. Johnson’s 22.5 sacks ties a school record. 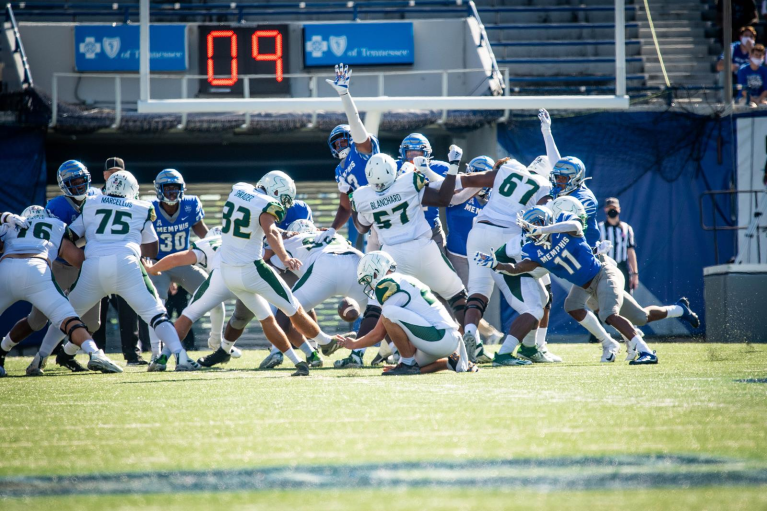 K Spencer Shrader, South Florida
Shrader had his first game with a field goal opportunity since Sept. 12 for the Bulls. He did not disappoint in USF’s disappointing 34-33 loss to Memphis. Shrader was a perfect 4-for-4 on field goals, hitting from 49, 47, 41, and 46 yards out. He became the first kicker in USF history with four field goals of at least 40 yards in a game. Shrader is just the fourth South Florida kicker to have four made field goals in a single game. The four field goals in this game matched his entire 2019 total.

K Evan McPherson, Florida
Another kicker from the state of Florida makes this week’s list as McPherson showed off his booming leg in the Gators’ 44-28 win over No. 5 Georgia. McPherson made three of four field goal attempts, hitting from 50, 51, and 34 yards out. He also was 5-for-5 on extra point attempts. He now has made four field goals of at least 50 yards this season — the most in the country. It’s the third time in school history that a kicker had multiple field goal makes of 50 yards in a single game. Eddy Piñeiro and David Posey are the other two Gators to accomplish the feat.

KR Zonovan Knight, NC State
Knight was all over the field for the Wolfpack in their close 44-41 loss to No. 11 Miami. Knight had one kick return in the game, but took it to the house for 100 yards late in the third quarter to give NC State the lead at the time. He also had 13 carries for 45 yards and a goal-line touchdown. He is the only NC State player since at least 2000 to have a kick return touchdown and a rushing touchdown in the same game.

PR Charlie Jones, Iowa
Jones was a big playmaker in the Hawkeyes’ lopsided 49-7 win over Michigan State. Jones had five punt returns for 105 yards, including a 54-yard touchdown late in the second quarter. He also had two carries for 38 yards in the contest. Jones is the only Iowa player since at least 2000 to have 105 punt return yards, 35 or more rush yards, and a punt return touchdown in a single game. He is just the third Big Ten player to accomplish this feat since 2000, joining Northwestern’s Venric Mark (2012) and Minnesota’s Tellis Redmon (2000). 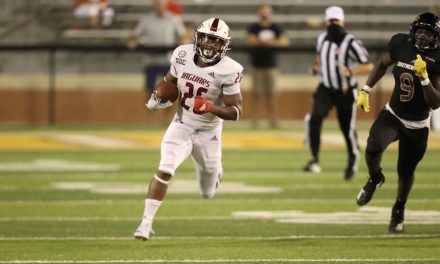 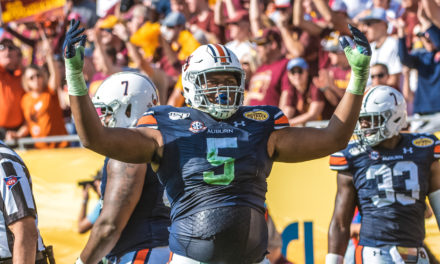 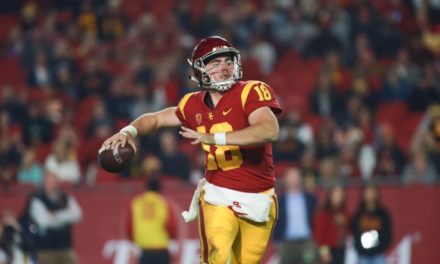 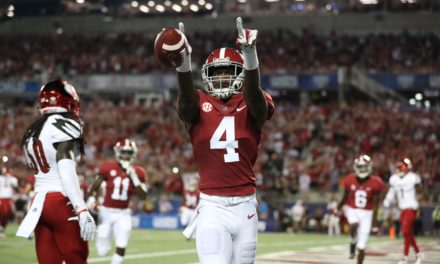