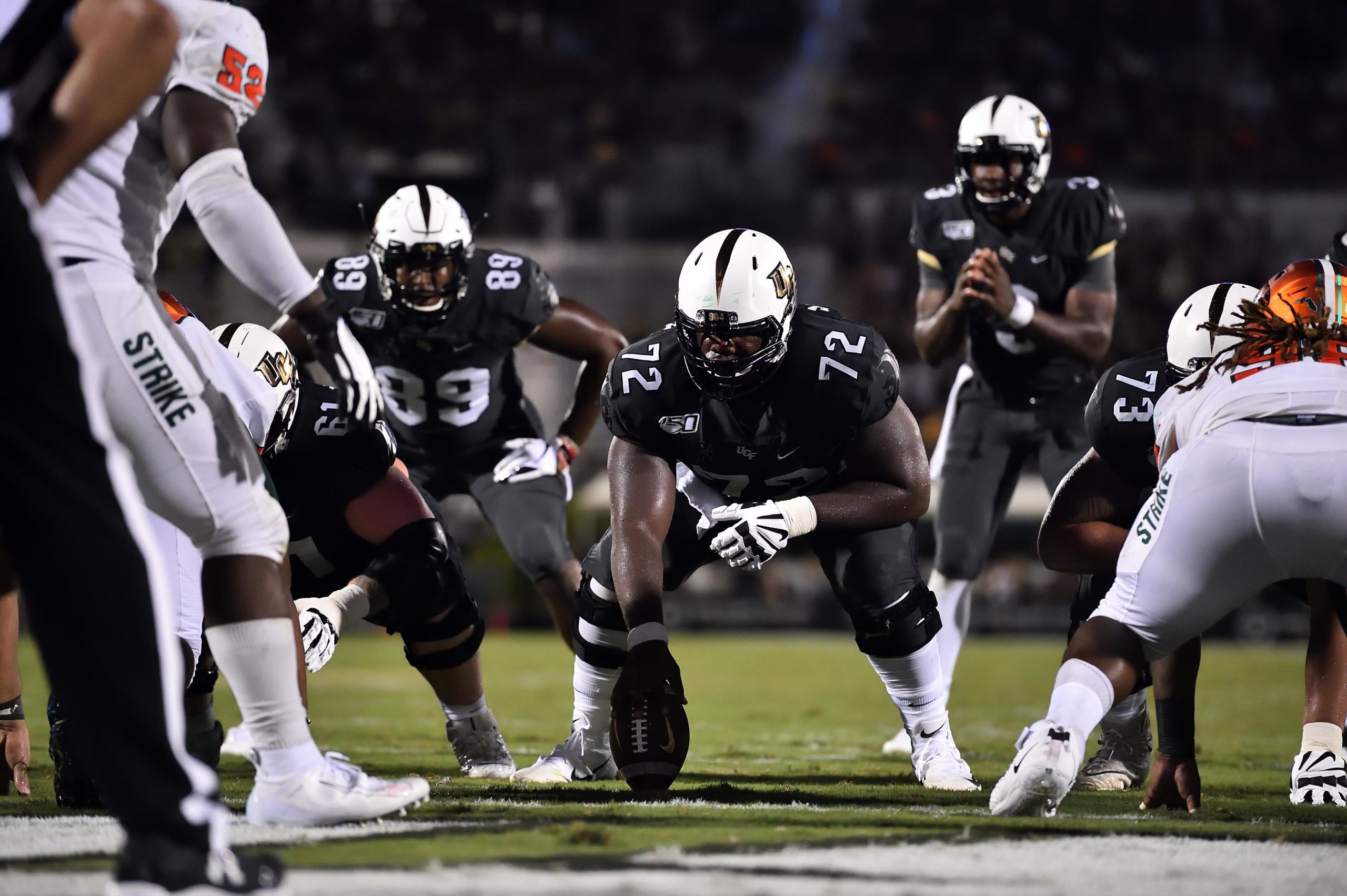 While in high school, offensive linemen Jordan Johnson was told to commit to a college where he feels welcome. To him, that college was UCF.

“I met a lot of good people down there at UCF on my official visit,” said Johnson. “That was one of the main things because my oldest brother, he went through the recruiting process as well and he told me, don’t go to a school because you like the coaches because a lot of times, coaching changes happen.”

Johnson committed to UCF as a 3-star prospect after shining at Ed White High School in Jacksonville. During his senior season, Johnson was named to the FHSAA Class 6A All-State first team.

“I had a lot of fun playing at Ed White,” Johnson said. “I met a lot of good people and Jacksonville high school football is very competitive, so I had a chance to play against some good talent growing up to get me ready for the next level.”

In his freshman season, Johnson was a staple on the UCF offensive line. Johnson made an appearance in all of UCF’s 13 games and started in 12.

As a unit, the offensive line allowed 36 sacks and paved the way for 1,839 rushing yards. As a team, UCF averaged 3.5 yards per carry.

Although the switch to center could provide challenges for some offensive linemen, Johnson’s switch did not prove much of a challenge.

“When I was recruited, they let me know that I was going to be playing center and I was like, ‘I’ve never played center before in my life but I’ll do it if you need me to, coach,'” Johnson explained. “And they recruited me as a center, even though I predominantly played guard and tackle in high school. When I moved to center, the hardest thing was just learning how to snap. Once I learned how to snap, it was just like playing guard but snapping the ball between your legs.”

UCF’s Rise to the Top

The 2017 season, Johnson’s sophomore year, was also the start to one of the nation’s most impressive and polarizing Cinderella stories. After finishing with a 6-7 record in Johnson’s freshman season, the Knights finished 2017 with an undefeated record. They capped the season with a thrilling 34-27 win in the Peach Bowl over Auburn. 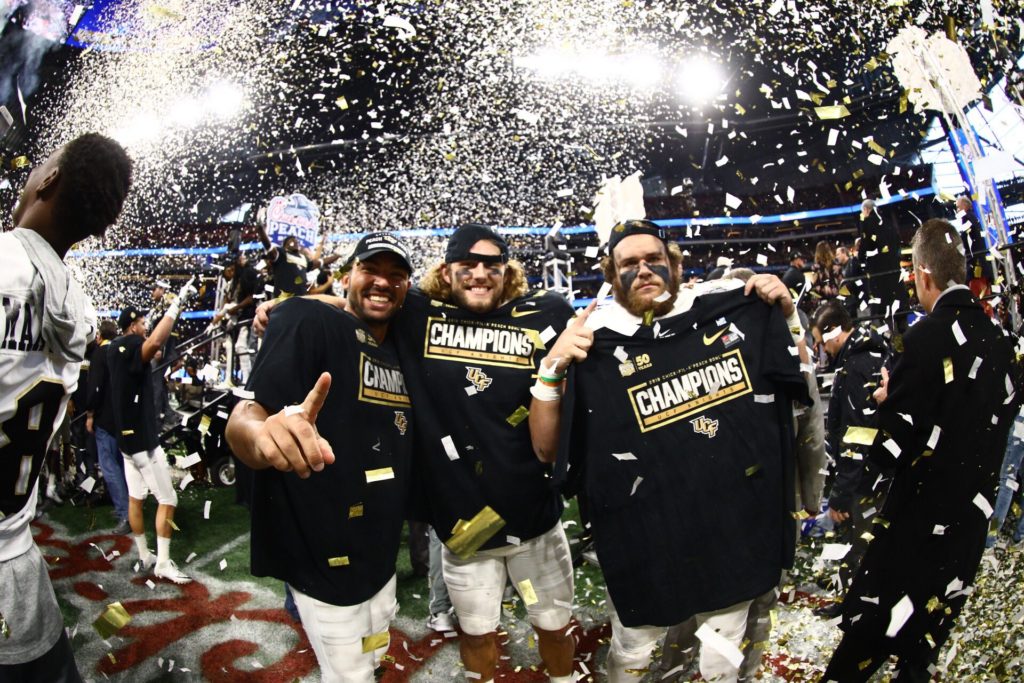 For Johnson, the reason for the boost in wins was a combination of luck and a culture change that Johnson is sure will carry on to the next UCF leaders.

“We definitely came in and changed the culture around there and created a winning culture around UCF and I’m sure the guys we passed the baton to will keep that going,” Johnson said. “As well as things just started clicking. [During] my freshman year, we went 6-7. We lost a lot of close games. We lost games by two, three points, some games in double-overtime, some games on the last play of the game. And then that 13-0 year, we just started winning the close games. The things started to fall into our favor and we started winning when it mattered.”

With expectations high in 2018, Johnson and the UCF offensive line continued their meteoric rise. Johnson was once again earned first-team honors in The American, helping the UCF offense break the single-season rushing record with 3,348 rushing yards.

As a team, UCF finished with a 12-1 record, ending the season with a 40-32 loss to LSU in the Sugar Bowl. The contest in Atlanta was with backup quarterback Darriel Mack at the helm. Mack was forced into action after McKenzie Milton suffered a season-ending injury in UCF’s regular-season finale against South Florida.

“We did really [well]. That was back when we still had McKenzie and he was really well. A lot of it was, we would gel together as an offensive line unit because we played with each other now for a couple years,” said Johnson. “Even though we got a new coaching staff, it’s still like the same guys and we’re out there playing for each other; it’s like truly a brotherhood. A lot of people say that around the nation, ‘we’re brothers’. At UCF, we really felt like the brotherhood, that we were playing out there for each other, and that’s why we won a lot of games.”

Over the course of 2017 and 2018, UCF went on a 25-game winning streak. The winning streak was one of Johnson’s favorite moments while playing at UCF.

“Just having the winning streak that we had. 25 games in a row, you don’t see that often at all. So, that was a lot of fun to be a part of because all of us are competitive, so being able to say that you won week in and week out was like being on top of the world,” Johnson recalled. “Especially because it was a grind every week. Like, you question yourself like ‘man, why do I even do this?’ …But at the end of the day, the end of the week, you coming out with a win made it all worth it.”

After two seasons that finished with just one total loss, UCF took a step back in 2019. Paired with the injury to McKenzie Milton that kept him out for all of 2019, the team struggled to win close games, dropping multiple games by just one score.

As a collective, the offense continued their solid play. Led by new starting quarterback Dillon Gabriel, Johnson, along with the rest of the offensive line, paved the way for 2,909 rushing yards and 4,117 passing yards. The offensive line allowed 23 sacks, an increase from the last two seasons.

At the end of the season, UCF finished with a 10-3 record with losses to Pittsburgh, Cincinnati and Tulsa.

“To be honest, it was a disappointment because we lost three games, especially losing to a 2-7 [at the time] Tulsa team but a 10-3 season is not anything to be upset about at all,” Johnson said. “It’s just that coming off a 13-0 season and a 12-1 season, 10-3 doesn’t sound as appealing.”

For Johnson, the drop in record for UCF was a combination of unluckiness that plagued his freshman season and the injury to Milton.

“McKenzie going down hurt us a lot, but that’s not a knock on Dillon Gabriel because he’s a baller. This was his first year coming in, so I just know he’s going to be even better than he was this year, because he balled out his freshman year,” Johnson said. “And then, the same thing that happened our freshman year, we just lost a lot of close games. I think the total amount of points we lost by this year was seven, all together. We ended up losing by one point to Pitt, three points to Cincinnati.”

Throughout his UCF career, Johnson has faced plenty of Power 5 opponents and top defensive line talent, including some on his own team.

“I played against [Deadrin Senat]; he ended up being drafted by the [Atlanta] Falcons. Then, just going against Trysten Hill every day in practice made me better. Jamiyus Pittman, another d-lineman that we had, signed with the [Miami] Dolphins,” Johnson said. “And then, I played against Ed Oliver at Houston, but we were both freshmen back then. So he wasn’t the player that he turned into eventually. But he was still a very good player his freshman year, as well. A couple of good talents, I played against the LSU d-line, those guys were good. The guys at Auburn were also good, [Dontavius Russell and Derrick Brown], they were both good.”

During his UCF career, Johnson made a significant change to his diet. Johnson, with the advice from his brother Kaleb, transitioned from a normal diet to a vegan-based diet in order to gain a competitive edge over his competition.

At first, Johnson was hesitant to make the switch.

“My older brother, he did a couple of years in the NFL and he was just trying to find a competitive edge against his opponents and he let me know that it would probably benefit me as well,” Johnson said. “I was like, ‘bro, no, leave me alone. I’m never going vegan.’”

“Eventually, we had a break from school; it was the Fourth of July break. I came back home and I told him I would try and become a vegetarian. And I tried it and I kind of liked it a little bit,” Johnson explained. “Then, I stuck with it after I came back from that break, it was like a week long. And then, when I came back I just wanted to see how long I could do it and [I] just started transitioning over. I started cutting things out that I felt were not good for me like dairy, eggs, wheat and stuff like that. When I started transitioning, I did a lot of research and I found out that the vegan diet is what a lot of players are doing in the NFL.”

Since switching his diet, Johnson has seen plenty of benefits from doing so. That includes better recovery time and more energy.

“My recovery time after a workout or after a game, I honestly think it’s been cut down to like half. My freshman and sophomore year, I used to be really tired after the game, the day after the game, groggy, didn’t really want to go nowhere. And then, junior and senior year, I felt like I could play another game the next day. It was that drastic of a change,” Johnson said. “I also have better energy levels and I can move quicker. I’m slimmer and I’ve trimmed down and I’m [leaner].”

Coming from UCF, Johnson feels he has a chip on the shoulder that is different to players who come from some of the top college football programs.

“I think it has always given us that grit, that underdog mindset that we have a lot to prove and I think that’s what I’m coming into the NFL with, just a lot to prove,” Johnson continued. “And that’s the common theme of UCF.”

During the off-season, Johnson was invited to the Hula Bowl — an NFL Draft all-star game that takes place in Hawaii. For Johnson, the Hula Bowl experience was amazing on and off the field. 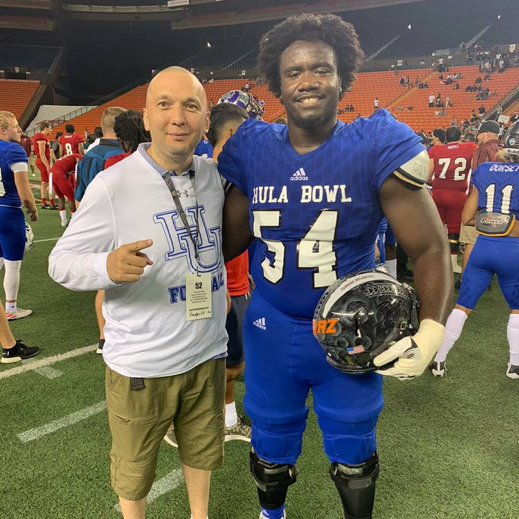 Jordan Johnson at the Hula Bowl. (Photo Provided by agent).