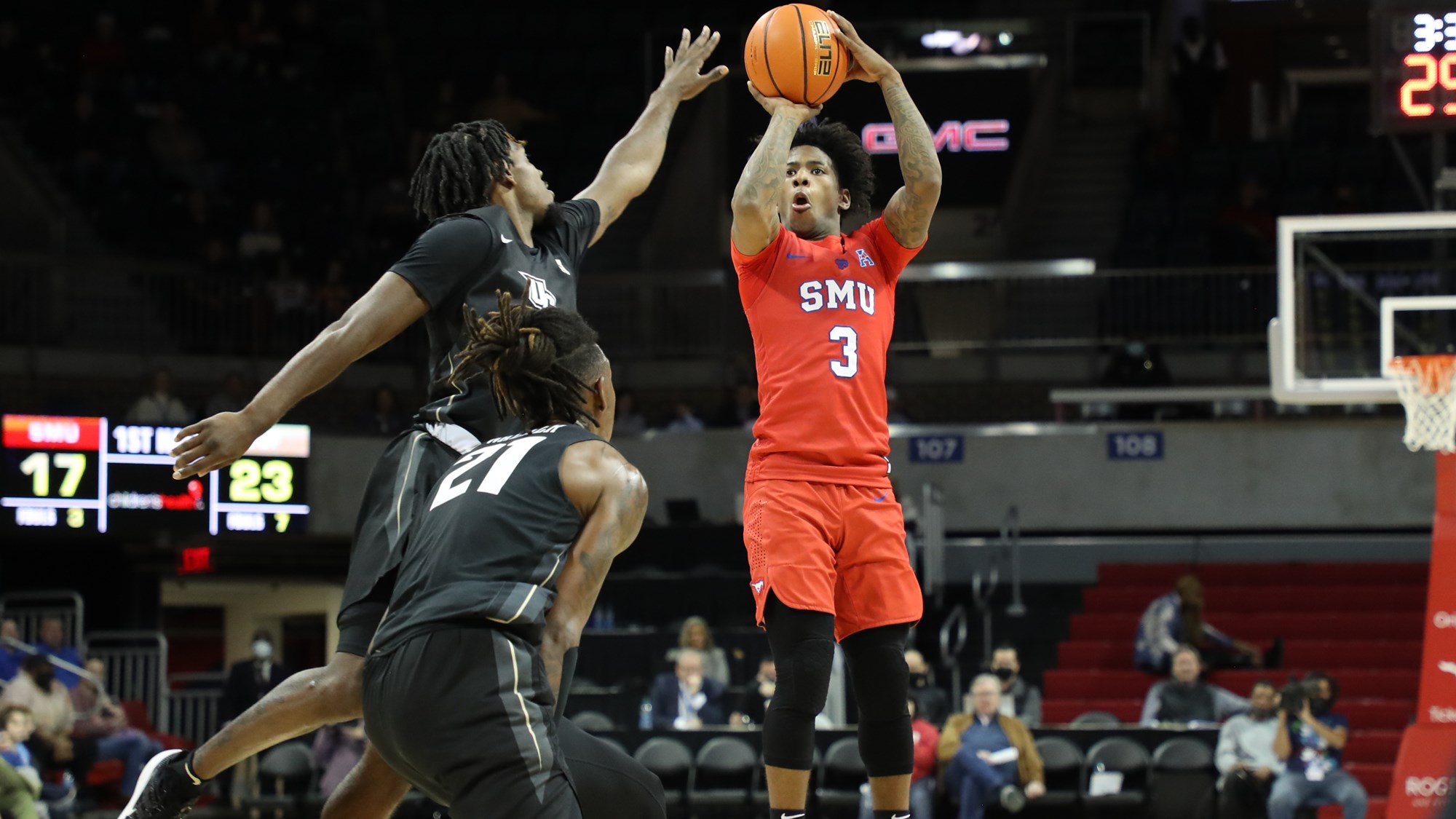 The SMU Mustangs walloped on the Memphis Tigers at Moody Coliseum, 73-57.

Kendric Davis cemented the fact that he is the American Athletic Conference Player of the Year, as he scored 27 points on 10-for-19 from the field and 6-for-11 from three.

And even when SMU was able to break the press, the open shots were not falling. The Mustangs started just 2-for-7 from the field on primarily wide-open shots.

Despite Memphis going on a three-minute scoring drought, it held an early 10-5 lead through the first commercial break.

Guard Alex Lomax was in foul trouble early for the Tigers, though. His absence for much of the first half really threw Memphis off of its game. When he came back, it looked like the Tigers were ready to take command of this one.

SMU would then go on a 12-0 run, punctuated with a Kendric Davis three at the buzzer. The Mustangs led 37-32 at the half.

SMU takes off, leaves Memphis in its wake

The game would never get that close again.

Memphis would not score for another three minutes, and over the course of the next 10 minutes, SMU would go on a 25-3 run. A Lestor Quinones three-pointer would be Memphis’ only points of that 10-minute stretch.

At the end of that run, Marcus Weathers would tip in a ball. It gave the combination of Marcus Weathers and Davis 44 points — the amount of points the entire Memphis team had scored at that point.

After a handful of free throws from Davis and some Memphis points to make the score look more palatable, this one was over.

Three Tigers scored in double figures — Quinones with 13, Landers Nolley II with 12, and Jalen Duren with 11.

Despite Lomax only scoring six, he added five assists and was clearly a glue guy.

Only two Mustangs scored in double figures — Davis with 27 and Weathers with 20.

Perhaps the surprise of the game was Franklin Agunanne. The role player has averaged about five minutes, 0.9 points, and 1.3 rebounds per game up to this point of the season. He played plenty of minutes, scored eight points, grabbed seven rebounds, and was an integral piece of the SMU squad.

Jahmar Young Jr. also was a solid contributor on the defensive end, adding a few rebounds of his own.

Considering the Mustangs were missing Tristan Clark after already having lost Isiah Jasey for the season, they needed a big game from a big to try and counter the height and wingspan of Duren.

Because the tallest starter in SMU’s lineup is the 6-foot-5 Marcus Weathers, Agunanne’s contributions cannot possibly be understated.

What SMU was not able to make up for in height, it made up for in heart. The Weathers twins combined for more than half of SMU’s offensive rebounds — seven of 13.

For the height advantage Memphis was supposed to have, it only outrebounded SMU offensively by a margin of 14-13.

Michael Weathers was relatively quiet from the field with six points, but he did have 10 rebounds, five assists, three steals, and four blocks. That’s a dynamic stat line that Mustang fans would take every time.

What’s Next for SMU

The next game for SMU is a home contest against Tulsa on Wednesday, Feb. 23 at 7 p.m. CT. Currently the game is set to be shown on ESPN+.

After the win over Memphis, SMU improves to 10-3 in conference and 19-6 overall. The Mustangs sit one game behind Houston in the conference standings.

For SMU to have a chance at an at-large spot in the NCAA Tournament, every game is must-win, with the possible exception of the Feb. 27 trip to Houston.

SMU has now won 15 in a row at home, and three of the final four regular season games are at home.

Also, there’s still a possible rescheduled game against Wichita State that would be a home game.