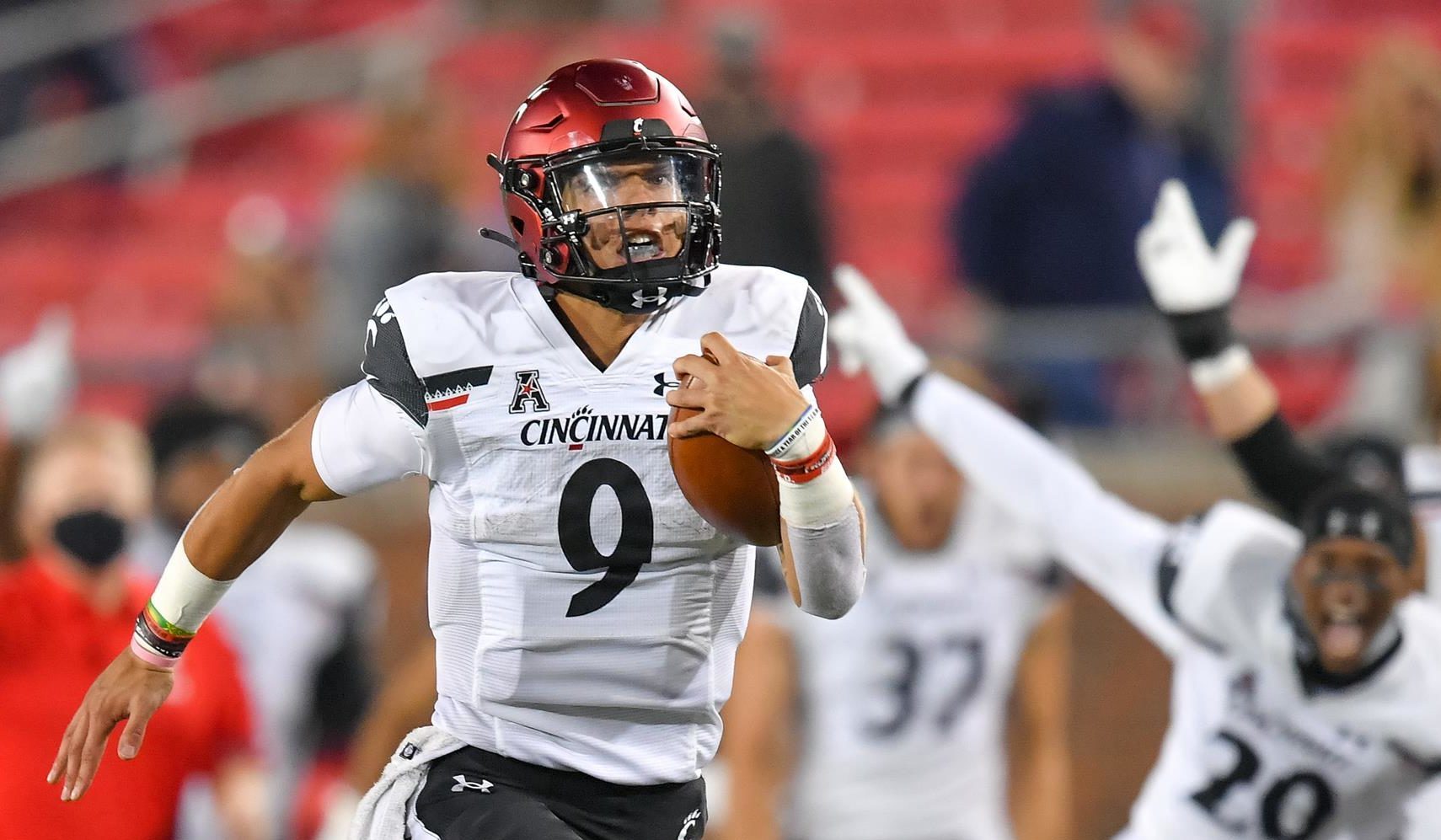 It’s the time of the offseason where most fans have asked some variation of this question at least once – “can you believe what Las Vegas thinks of our chances this season?”

Now that we’re about a month out from the American Athletic Conference kicking off the season, let’s look at what Las Vegas thinks of each AAC team.

Please feel free to let us know why we’re wrong, on Twitter: @CJOlson2000 or @FQ_SMU.

Some notes before beginning:

All odds and win totals come from the William Hill Sportsbook.

Some are not all that familiar with odds, or don’t understand the math with the plusses and minuses.

We’re also going to occasionally refer to something known as implied odds. Basically, implied odds are Vegas’ odds turned into a percentage. A bettor should be at least that percent confident in a bet’s likelihood.

Temple’s win total has been set at three, with odds being listed as -110 for both over and under.

Bettors going either over or under should feel at least 52.4% confident in their bet.

This is the bet we’re the least confident in. Ultimately, we’ve settled on the under of three wins.

Temple should pick up a couple wins against Akron and Wagner, but then it’s hard to find two more.

The Owls’ away contest against South Florida on Oct. 23 is probably their next best chance at a win. East Carolina and Navy are also contests to stick around for.

Push seems like far and away the most likely outcome, so we’re claiming the under but going with a confidence of one.

After going 6-0 in conference play a year ago, Las Vegas is a little more bearish on Tulsa’s 2021.

Bettors going over should be at least 48.8% confident.

We have Tulsa at just about six to seven wins. The Golden Hurricane should get four relatively easy wins in UC Davis, USF, Navy, and Temple.

They also have three likely losses in Oklahoma State, Ohio State, and Cincinnati.

This leaves them needing to go 3-2 over the remaining games of Arkansas State, Houston, Memphis, Tulane, and SMU.

With a new quarterback and no Zaven Collins, it’s very possible that Tulsa doesn’t hit the over.

Ultimately, though, we feel like they should get there — but barely.

Here’s an instance where the odds actually impact our decision.

We feel like East Carolina is about a four- or five-win team, so to get +115 on something we feel could go either way is pretty good.

East Carolina should have wins against Charleston Southern, USF, and Temple.

From there, they’d just need to grab a couple more, from some combination of South Carolina, Tulane, or Navy.

There are a lot of games where East Carolina should be competitive, but finding two more wins requires a little too much reaching for our liking.

This means an over bettor should be 51.2% confident.

Games against East Carolina and Temple are games we have marked as likely wins.

Between those three games, as well as potentially upsetting a likely loss, we see at least the four necessary wins there.

Here’s another one where Las Vegas has both odds set at -110.

As for their schedule, we have the Bearcats with likely wins over Miami University, Murray State, Temple, Navy, Tulane, Tulsa, USF, SMU, and East Carolina.

This means they just have to go 1-2 against Indiana, Notre Dame, and UCF to push, or 2-1 to win. It should help Cincinnati that it travels to Notre Dame after a bye, and have an extra day to prepare before hosting UCF.

Although the Bearcats lost defensive coordinator Marcus Freeman to Notre Dame, we still feel like there’s too much talent for this not to go over.

The only situations where the over hits are 11 and 12 wins. And it is college football, where going undefeated in two consecutive regular seasons is very difficult.

So for those reasons, we’re only at a confidence of six.

The Gus Malzahn era has begun in Orlando.

Las Vegas has both the over and the under odds set to -110.

That just leaves the Knights needing to go 2-2 or better against Cincinnati, Memphis, Tulane, and SMU.

Similar to Cincinnati, we want to be careful about being too optimistic for a high win total. But this schedule sets up nicely for UCF to have a 10-win season.

If there’s someone out there who is confident in the Bulls, William Hill is offering +110 as the over odds.

So, Las Vegas does not think USF is likely to cover the already-low number of three wins. But, the implied odds are 47.6%, so if someone thinks there’s a chance, it might not be a bad bet.

We ultimately do not give it much of a chance.

South Florida has a likely win against Florida A&M. But that’s it.

We also don’t like the Bulls’ chances against BYU, Tulsa, and ECU.

That just leaves Temple to pick up a second win, and then from there, none of the other teams on the schedule seem like they’ll get a bettor to at least a push.

To lose this under bet, USF would need to win four games. We just don’t see that happening.

So there will probably be some unhappy Tigers fans that don’t like us picking the under at -110 odds.

Looking at the schedule, Nicholls, Arkansas State, Temple, Navy, and ECU are all games we have pegged as likely wins.

So we’re counting on them going 3-4 or worse against Mississippi State, UTSA, Tulsa, UCF, SMU, Houston, and Tulane.

The reason we’re not on the over is because Memphis going 4-3 against that combination of schools feels unlikely.

The Tigers landing right on the number of eight is probably most likely, but since we have to lean one way, we’re going with the under.

Houston and Memphis are very similar in schedule.

Neither of them have any likely losses, but we have them likely to land on their win total number of eight.

For Houston, we have likely wins against Rice, Grambling State, East Carolina, USF, Temple, and Connecticut.

That leaves it only needing to go 2-4 against Texas Tech, Navy, Tulsa, Tulane, SMU, and Memphis to push, or 3-3 to go over.

The Cougars have a very easy schedule, but they just don’t seem like a nine-win team.

And for what it’s worth, their odds are -125 on the over and +105 on the under. So, riding with the under might be worth it, given those odds.

If anyone out there is an under bettor, SMU has the best payout in the conference if they go under.

But, for the Mustangs, we are well over 60% confident they’ll hit six wins.

It’s hard to see where Las Vegas is finding six losses for SMU on its schedule.

We have SMU with likely wins against Abilene Christian, North Texas, Louisiana Tech, USF, and Navy. The only likely loss we give the Mustangs is Cincinnati.

So that means they just need to go 1-5 against the combination of TCU, Tulane, Houston, Memphis, UCF, and Tulsa to push, or 2-4 to hit the over.

With a change of quarterback, Las Vegas is a bearish on the Mustangs, but far too bearish for our perspective.

Does Las Vegas realize that Tulane had a true freshman who didn’t get spring practice at quarterback in 2020, and still managed a 6-5 regular season record?

And that 6-5 record came with three losses by six points or less.

Las Vegas does think the over is more likely, giving it -130 odds. So, a bettor should be at least 56.5% confident in the over to hit before placing an over bet on the Green Wave.

We give them likely wins against Morgan State, East Carolina, and USF.

Their only likely losses are against Oklahoma and Cincinnati.

It’s not like we think Tulane is some nine- or 10-win team lurking in the shadows, but let’s give it a little credit.

At the very least, the 9/10 confidence is because we’re almost positive that Tulane won’t go 4-8 or worse.