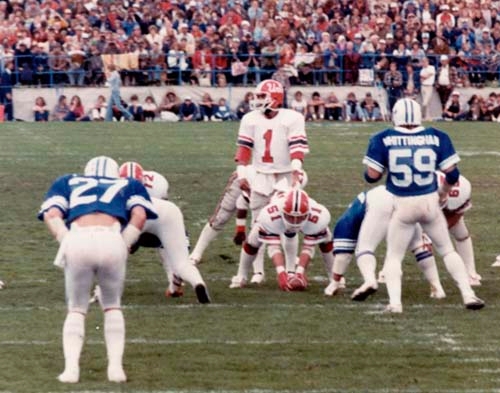 In its history as an FBS program, UNLV has just one win over a top-10 team. It came on this day 40 years ago and in improbable fashion.

UNLV started strong, but BYU seized control over the middle parts of the contest. The Runnin’ Rebels however, bounced back with the game’s final 21 points and a last-second touchdown to stun the Cougars, 45-41.

UNLV was in just its fourth season as a Division I-A (now FBS) program as it made its way to Provo on Oct. 10, 1981. Then an Independent, the Runnin’ Rebels were off to a 3-2 start.

BYU was 5-0, ranked eighth and riding a 17-game winning streak as it arrived at Cougar Stadium. To that point, the Cougars had averaged nearly 43 points per game.

UNLV owned a couple of early leads, but it looked as though BYU’s talent advantage had won out. On homecoming in Provo, Waymon Hamilton’s third touchdown run had give BYU a 41-24 lead in the third quarter.

From there however, a struggling and banged up UNLV defense settled in and the offense came to life. Before the third quarter was over, Mel Carver found the end zone on a short touchdown run to make it 41-31. In the fourth, Ray Crouse’s second touchdown run of the game cut the lead to three.

With one last possession, the UNLV offense stunned the homecoming crowd. With the ball on the BYU 20-yard-line with less than a minute to go, UNLV quarterback Sam King delivered a perfect 20-yard touchdown strike to Jim Sandusky with just 19 seconds remaining.

King finished the night with 473 yards passing and three total touchdowns. Both he and BYU’s Steve Young, who started in place of an injured Jim McMahon, were intercepted four times.

Young passed for 269 yards while Scott Pettis led BYU with 100 yards rushing and a score on just nine carries. As a team, BYU finished with 242 yards on the ground. The schools combined for 1,139 yards of offense.

Receiving, UNLV’s Sandusky (146) and Michael Morton (161) combined for 307 yards and each caught touchdowns. Morton also rushed for 42 yards. Defensively, UNLV’s Elex Williams and BYU’s Kyle Whittingham each came down with two interceptions for their respective teams.

Following a monumental victory, UNLV proceeded to lose its next four games during what would be a 6-6 season. BYU slipped up again two weeks later against Wyoming, but closed the year on a 5-game winning streak to win the WAC, finish 11-2 and in the top 15.

BYU is still the highest-ranked opponent that UNLV has ever defeated. That victory came on this day four decades ago.