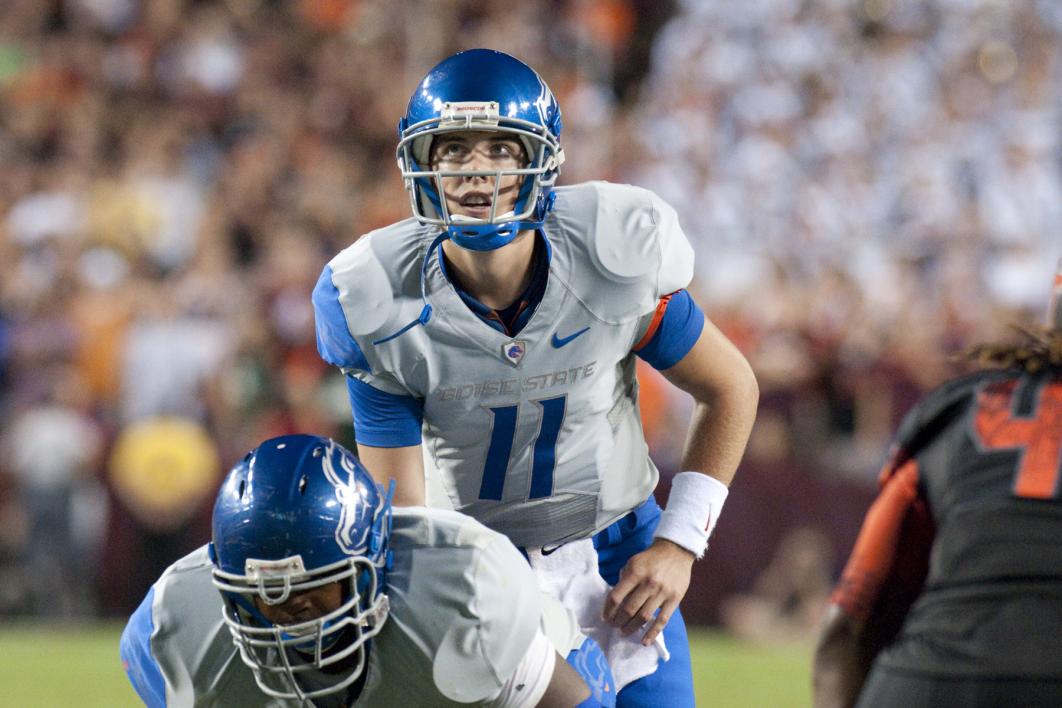 For Boise State, knocking off big-name programs has become commonplace.

The Broncos have gained national respect with their ability to stand toe-to-toe with the nation’s elite and ultimately prevail. On this day a decade ago, Boise State showed that ability.

With the game in the balance, the Broncos scored late to stun Virginia Tech in a Labor Day thriller on Sept. 6, 2010. Kellen Moore’s 13-yard touchdown pass to Austin Pettis with just over a minute to play lifted Boise State to a 33-30 victory in a top-10 showdown.

Third-ranked Boise State was coming off a second undefeated season in three years as it made its way to Landover, Mary. for the season opener. The Broncos had finished No. 4 in the final polls and were returning a number of key pieces to include Moore, an All-American quarterback, receivers Pettis and Titus Young along with sacks leader Ryan Winterswyk.

No. 10 Virginia Tech was two years removed from an ACC title, Orange Bowl victory and top-10 finish. In 2009, Virginia Tech finished 10-3 and on a 5-game winning streak for a No. 10 national ranking to close the year. Tyrod Taylor was a talented quarterback, but the strength for the Hokies was the defense. Virginia Tech featured players such as safety Davon Morgan and cornerback Jayron Hosley.

The Broncos trailed 30-26 when the defense held firm on a critical third down with less than two minutes to play. Boise State had forced an incomplete pass on 3rd-and-8. That led to a Virginia Tech punt. After a nice punt return by Mitch Burroughs, Boise State took over at its own 44-yard-line with 1:35 to go.

During Burroughs’ return, a flag was initially thrown for an illegal block, but ultimately picked up. That set the stage for Kellen Moore to go to work. To that point, the Broncos had scored just six points in the second half.

Moore began the drive with three straight completions. His third pass of the drive — a 14-yard throw to Pettis — was aided by a personal foul on Virginia Tech and moved the ball inside the Hokies’ 15-yard-line.

After an incomplete pass, Moore went for the jugular. Following a play-fake, Moore was able to find Pettis on a post to the inside. He delivered a perfect pass, which Pettis corralled in the back of the end zone. The scoring strike capped a 5-play, 56-yard drive that lasted only 38 seconds.

Down 33-30, Virginia Tech took over with more than a minute to play. The Hokies would never threaten as three incomplete passes and a sack ended the drive and essentially the game. The Broncos had slayed yet another Goliath.

Early on, it looked as though the contest might be an easy one for Boise State. Behind a pair of Moore touchdown passes, the Broncos led 17-0 after a quarter. The Hokies however, weren’t going to roll over.

After Kyle Brotzman missed a 30-yard field goal attempt that would have given the Broncos the lead early in the fourth quarter, a 34-yard make by Virginia Tech kicker Chris Hazley extended the lead to four. That score would remain until Boise State’s decisive touchdown drive.

Taylor passed for 186 yards and two scores, but also led the Hokies with 73 yards rushing. Boykin finished with a game-high 102 yards receiving in the loss.

The victory for Boise State would serve as its 15th straight. That streak would run to 24 before an upset loss at Nevada late in the season.

Virginia Tech would suffer an unthinkable loss to James Madison five days later, but managed to circle the wagons. The Hokies rattled off 11 straight wins to claim a third ACC title in four years. Virginia Tech was handled by Stanford in the Orange Bowl to close the season.

The victory for Boise State on Labor Day night marked the Broncos’ fourth win over a ranked team from a BCS conference in five years. It came on this day a decade ago.