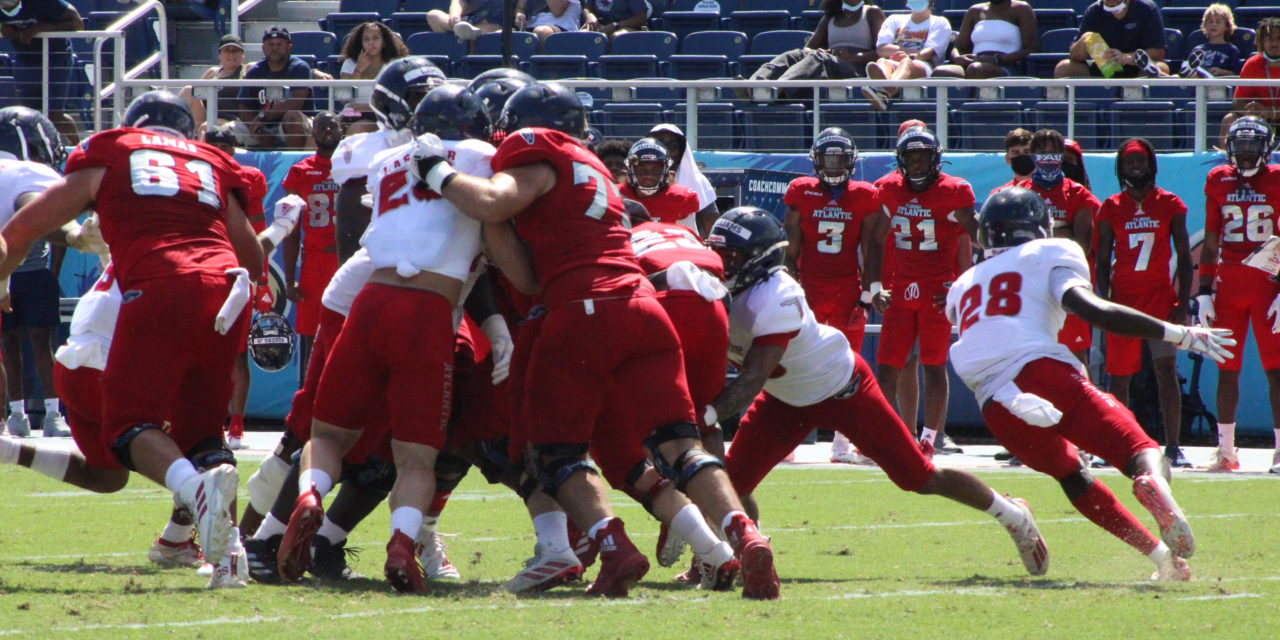 Although it wasn’t an official game, the Florida Atlantic Owls returned to FAU Stadium for the Owls’ first spring game since 2019.

While the score doesn’t matter, the play on the field gave FAU fans their first glimpse of the 2021 team. Previously, intrasquad scrimmages held during spring camp were closed to media and fans.

Despite the unofficialness of the game, there was plenty of positives that stood out for the Owls as they head into the summer.

Although no quarterback likely separated himself from the pack during the spring game, there were still positives from the position.

Nick Tronti drew the start for John Bills’ team and threw the most passes of any quarterback on his team. Tronti completed five of his 15 passes for 81 yards. While Tronti didn’t throw for a touchdown, he helped orchestrate Zuberi Mobley’s touchdown drive.

Overall, Tronti seemed to have a solid command of the pocket and made some nice throws. In the first quarter, Tronti found Ryan Cameron for a first down while evading pressure. On the very next play, Tronti threw a good ball towards the pylon that Aaron Young couldn’t track.

Tronti, however, might’ve been outshined by the play of Penn State transfer Michael Johnson Jr., who was the other quarterback on Bills’ team. Johnson completed four of his five passes for 100 yards and two touchdowns.

One of his touchdowns — a 56-yard throw down the field for Young — might’ve been the best play of the game. After evading pressure, Johnson found Young and connected with him while still on the run.

On the other side, both Javion Posey and Willie Taggart Jr. had inconsistent nights. Posey, who left the spring game with an injury, finished the night with 18 yards on three completions.

Taggart Jr. completed five of his 15 passes for 95 yards and two touchdowns, including a 72-yard touchdown pass to running back Johnny Ford.

Following the press conference, head coach Willie Taggart gave his input regarding the play of the signal-callers fighting for the top spot on the depth chart.

“Nick [Tronti] was pretty much in control with what he had to do. [Javion] Posey, Mike [Johnson Jr.] and Willie Jr. were trying too hard early,” Taggart said. “Mike caught on a little quicker and made some good plays for us. Javion and Willie Jr. just missed some easy reads trying too hard.”

According to a report from 247Sports, one potential transfer portal quarterback option was in attendance for the game – former Miami quarterback N’Kosi Perry.

Perry, who entered the portal in February, finished his Hurricanes’ career with 2,484 passing yards and 24 touchdowns. In 2020, Perry filled in for D’Eriq King in the Outback Bowl after King went down with a torn ACL. In a losing effort, Perry completed 19 of his 34 passes for 228 yards and two touchdowns.

When asked if he believed that the starting quarterback is on the current roster, Taggart responded: “I hope so; that’s what we have right now. Someone’s got to step up and make plays. My job is to make this a highly-competitive football team. We weren’t that way last year. With the depth we have now, it’s getting a lot closer to where we want to be.”

What FAU may lack in quarterback play, it’ll more than make up for in running back depth.

While Malcolm Davidson and Larry McCammon didn’t play, the play of Zuberi Mobley, Kelvin Dean Jr., and Johnny Ford made up for it in a big way.

A freshman from Miami Northwestern High School, Mobley was the first running back to turn heads during the game. On the first scoring drive of the game, Mobley took four consecutive carries, including the 11-yard touchdown to cap off the drive.

Throughout the game, Mobley showed good vision and burst to make it to the sideline. Overall, his play left a lot to be intrigued about, especially for a freshman making his first appearance in a spring game.

“It was exciting,” Mobley said about his first spring game. “Yesterday, I was a little nervous. After the first run, I just knew it was going to come to me.”

After not playing much over the last few seasons, Dean made the most of his opportunity. On five carries, Dean ran for a game-high 74 yards. His longest run of 41 yards was also a game-high.

Dean wasn’t the fastest player on his team (that honor goes to Ford, as expected), but his play showed that of a player capable of being a starting running back for the Owls. It’s hard to see where his playing time will come from if everyone is healthy, but if Dean continues to play like this and make plays, it will be hard to keep him off the field.

The aforementioned Ford was electric, and no one should be shocked. Along with the 74-yard touchdown reception, Ford added 32 yards rushing.

Ford’s play has been the topic of many conversations during spring camp. He offers an electrifying play that FAU was missing last year, and he can do it both as a receiver and a rusher. While Ford may not start, Taggart and company won’t be able to keep him off the field.

FAU needs to find a kicker after last year’s starter Vladi Rivas entered the portal. On Saturday, both kickers fighting for that job had a chance to take hold of that position.

Both Morgan Suarez and Aaron Shahriari made field goals but neither was impressive enough to separate themselves.

Suarez had just one field goal attempt, connecting on a 51-yard field goal. While the kick didn’t clear with much to spare, clearing it is the first part of the battle. Suarez also hit an extra point.

Shahriari attempted two field goals, hitting one from 47 yards out and missing another. Shahriari also missed an extra point.

In the third quarter, Suarez’s punt was blocked by Jordan Helm and returned for a score. However, the score and blocked punt did not end up counting because of a penalty. 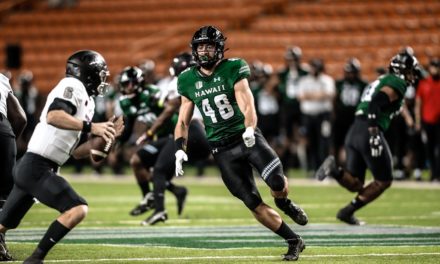 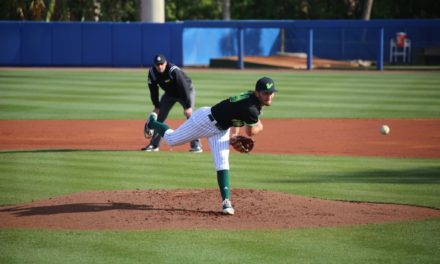 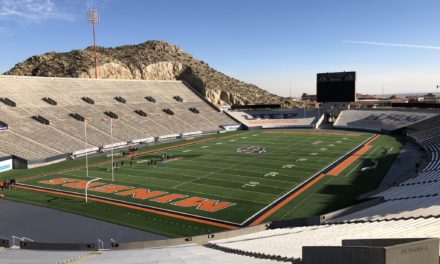 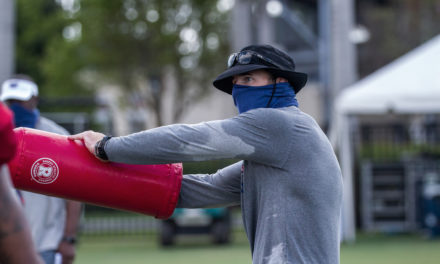