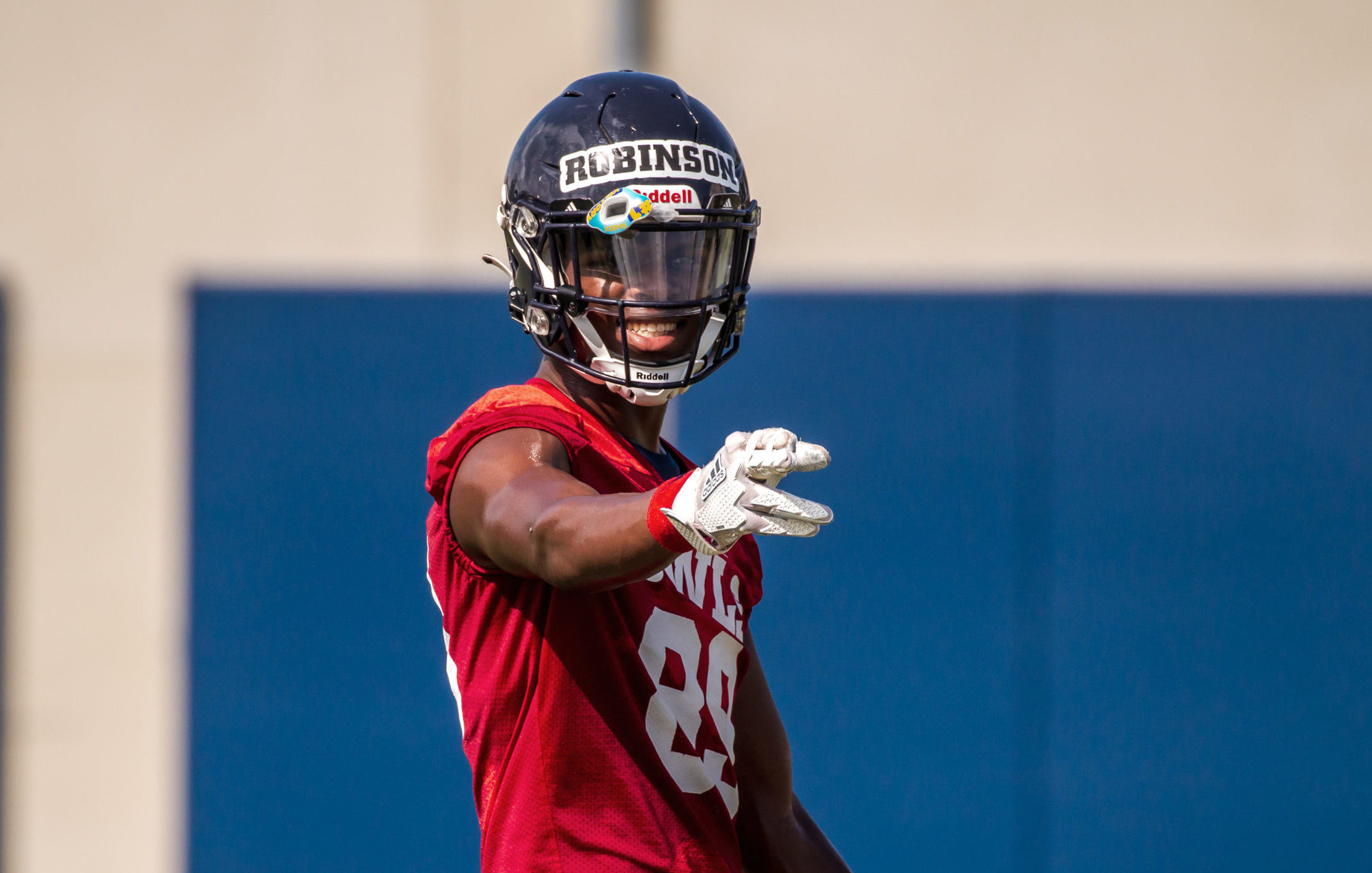 Former Automobile driver Bobby Unser, who has captured the Indianapolis 500 four times, said the following about success: “Success is where preparation and opportunity meet.”

In every college football player’s career, there comes a point where a player’s chances at success can be determined based on their opportunity. Opportunity is all a player needs; after that, it’s up to the player to gain success on the field.

Earlier in the season, it was quarterback Javion Posey, who earned the opportunity to take the starting job for Florida Atlantic. Posey has since taken that opportunity by the horns, starting the previous two games for the Owls. The Owls are undefeated in those two games, with Posey accounting for 555 yards from scrimmage and four touchdowns.

For redshirt senior wide receiver Brandon Robinson, that opportunity to impress and earn more playing time is just coming. Of his 170 offensive snaps this season, 62% (106 snaps) have come in the past three weeks. Robinson earned his first collegiate start in that same time frame, getting the nod against Western Kentucky in Week 10.

Although Robinson has been statistically quiet over the three games, the production on those statistics has changed games. On his three catches this season, Robinson has two touchdowns, including a 13-yard touchdown against Massachusetts on Friday.

The touchdown against UMass was a game-changing play. Midway through the third quarter, backup Nick Tronti connected with Robinson, who made a bobbling catch in the corner of the end zone for the touchdown. The score gave FAU a 14-0 lead.

“Really, it was a blur,” Robinson said of the touchdown against UMass. “All I remember is just focusing and [thinking] ‘just tell it in, finish the catch, finish the play’ because I know we needed those points.”

However, the opportunities weren’t always there for Robinson. The redshirt senior began his FAU career as a walk-on, receiving no playing time in his first two seasons. After drawing the start and impressing in FAU’s Boca Raton Bowl last season, new head coach Willie Taggart placed Robinson on scholarship in January.

“First of all, he just works his tail off. He does whatever you ask,” Taggart said about Robinson, who he first saw in the aforementioned Boca Bowl. “He’s not one of those … ‘get me the ball, get me this’ [guys]. He’s just ‘whatever you need me to do coach, I’ll do it. I’ll be there when the bell is rung.”

For Robinson, the scholarship eased a lot of the fears that many walk-ons face.

“Just not having to worry about financial problems back home. Be able to just play my game and and don’t have to worry about anything else but schoolwork and football; everything else just took care of itself, ” Robinson said of receiving a scholarship. “So, it’s a big relief.”

It’s not only Robinson’s work ethic that impressed coaches, however. They also like his skill set.

“And sure enough, he’s done that for us. I know, for me personally, I remember in the bowl game, seeing him catch a pass in the bowl game really stood out to me,” Taggart said. “Just seeing the body, he’s a big body receiver. And it’s good, in these last couple of games, see him make some big-time catches for us.”

Despite the scholarship easing some concerns, Robinson’s chip on the shoulder didn’t vanish. With three new Power 5 transfers joining the team, Robinson’s spot on the depth chart was never a guarantee. When FAU’s first depth chart was announced, Robinson entered as one of the backup outside wide receivers behind BJ Alexander.

“I just knew the goal was to get the scholarship. As far as every walk-on I’ve been with, it’s the same mindset. We just work hard and grind hard,” said Robinson about the chip on his shoulder. “And then carrying it over to when I got the scholarship, nothing changed. I knew I still had to work because I knew we still had transfers coming.”

Since camp, Robinson’s performance and work ethic drew praise from his new coaches. Co-offensive coordinator and wide receivers coach Drew Mehringer called Robinson a “model of consistency” when discussing what stands out about him.

“I love [Robinson]. He’s awesome, he’s been great since day one. He’s an incredible … inspiration but he brings a great attitude every single day. He works hard every single day, he knows what to do every single day,” Mehringer said of Robinson. “You think about where he’s come from, as a walk-on on this team and he’s earned every single thing that he’s ever gotten here. He’s had to earn that scholarship, he’s had to earn playing time. He’s fought, scratched, and clawed his way onto that field.”

Even if there are only three games remaining on the schedule, B-Rob – as he’s referred to by his coaches and teammates – may only be getting started. Coach Taggart believes players like Robinson will only continue to improve as the season progresses.

“As our quarterback [Javion Posey] continues to grow and learn and understand,” Taggart said. “I think you’ll see more of [Robinson] and some other guys, as well.”