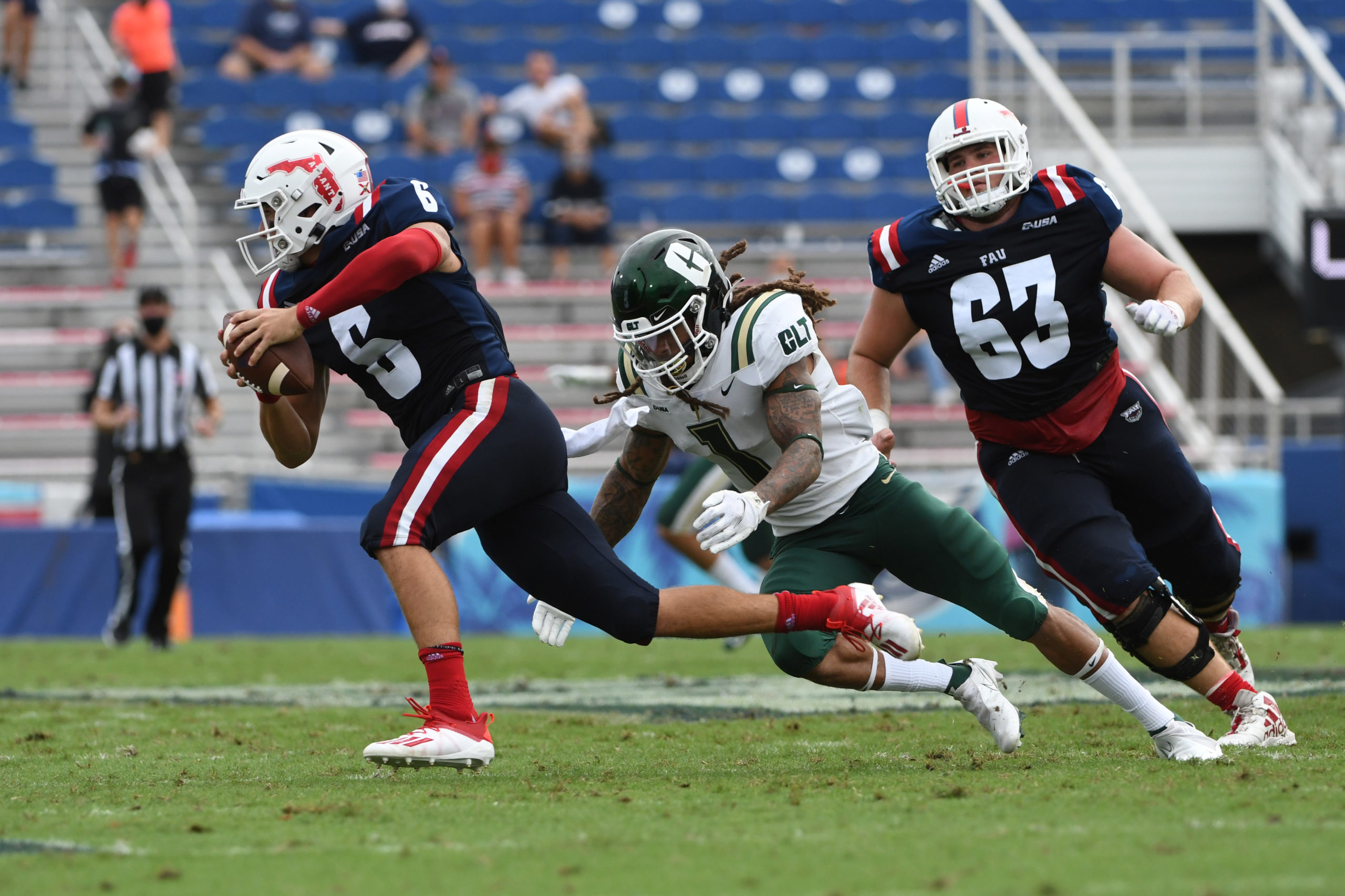 After the slow start for the offense, Florida Atlantic head coach Willie Taggart made a change at quarterback against Western Kentucky, opting to bring redshirt freshman Javion Posey off the bench.

The inclusion of Posey into the game seemed to kickstart the offense, as FAU scored its only touchdown of the night with Posey under center. As a whole, Posey seemed to bring further energy and a spark that the FAU offense had not yet seen this season.

“We talked about getting Javion some reps and having some plays for him but I felt like we needed a spark,” said Taggart following the game. “He came into practice this week and was a spark this week in practice and seeing the ways his teammates responded to him said a lot to me. In the game, he got out there and sure enough, it gave us a spark there.”

Following the game, Taggart was hesitant to open up the competition. However, it seems as if the competition has opened back up ahead of FAU’s Shula Bowl match-up against Florida International on Friday.

“I think it’s always open,” Taggart told reporters on Monday. “I think [Posey] made it a lot more interesting now. We try, each and every week, to keep every position open and try to bring the best out of our guys each and every week. Whichever guy practices the best is going to be the one that plays for us.”

Through three games, the FAU offense has yet to find its groove. The Owls have scored just 16 points per game, including just 20 second-half points in their last three games.

The Owls’ quarterbacks are a major stem of this struggle. Nick Tronti posted a Pro Football Focus grade of 59.0 and a passing grade of 54.4. In FAU’s lone loss to Marshall, Tronti posted a grade of 56.4, which ranked 14th among 21 players who received a grade.

The skill positions, however, has been a beacon of hope for the underperforming offense. FAU’s top three offensive performers via PFF rankings are all skill position players, with BJ Emmons leading the way with a 77.4 grade. FAU’s top wide receiver to date has been TJ Chase, who has posted a PFF grade of 73.4.

Despite low offensive output, the success of FAU’s wide receivers has been promising so far. When the offense has needed critical plays, the wide receivers have been able to come through and make those plays. Co-offensive coordinator and wide receivers coach Drew Mehringer has seen the promise from the wideouts.

“I think my group is getting better every single week,” Mehringer said on the wide receivers. “I think that, especially with some of these new guys walking around the program, you’re never 100% sure what they’re going to be when you get underneath the lights in-game time and stuff like that. … They’re a competitive group but they’ve come up with some big plays for us to keep drives alive.”

When discussing the quarterback competition with reporters during the week, Taggart mentioned a need for consistency from either Posey or Tronti.

“For Javion, he’s gotta continue; he’s gotta [have] some consistency,” Taggart explained. “I think just overall, whether it’s Javion or Nick, we need consistent play out of that position. We need to score touchdowns. It all starts with the quarterback and holding guys accountable and doing their job so the offense works together.”

When meeting with the media on Wednesday, Taggart had not yet named his starting quarterback.

Taggart’s goal for the offense, regardless of who starts, is simple – score some touchdowns against FIU.

“We need to score, bad. We need some touchdowns,” Taggart said on Wednesday. “The way you score, you have to play consistently. We gotta be able to play some consistent football. You can’t be good for one quarter than be bad for two other quarters.”

Stay Prepared and Be Ready

Littered amongst coach Taggart’s offensive staff is former quarterbacks, including himself.

One of those former quarterbacks is Mehringer, who played quarterback at Rice. Understanding the situation that Tronti and Posey are in, Mehringer mentioned that he hopes both quarterbacks are ready to play on Friday, regardless of who starts.

“Part of being a competitor is being ready when your number is called,” Mehringer said. “You don’t know when that opportunity is going to be. …I think that if you are sitting on the bench or if you’re taking snaps behind center right now, you have to be ready all the time.”

The X-Factor in the Competition

Although Posey’s time at quarterback is limited, the difference that his game has is clear. Anytime Posey touches the football, he’s capable of creating plays with his feet and making big-time runs that can change a game.

“I think what he brought to the offense on Saturday was both – the ability to run, the ability to make them defend 11 guys instead of 10 in the run game – made a huge difference and opened some things up,” Taggart said. “If you saw our sideline, just the energy he brought to this football team was really telling.”

The energy was something that Mehringer also mentioned when discussing the quarterbacks and the competition throughout the week.

“Posey’s got some energy to him,” said Mehringer. “There’s something a little bit exciting when the guy’s got his hands on the football. You’re just not 100% sure; he might take this one all the way.”

Tronti, however, has the advantage experience-wise, something that Mehringer said you have to balance when looking at both quarterbacks.

“I think based on reps, Tronti’s probably got a little bit of the advantage in the passing game because he has more reps,” Mehringer said. “Posey’s got a big arm. He threw the thing a country mile the other day and overthrew Willie Wright … Whoever Coach Taggart decides to go with, you’ll have to tailor your game plan to fit what they can do for you.”