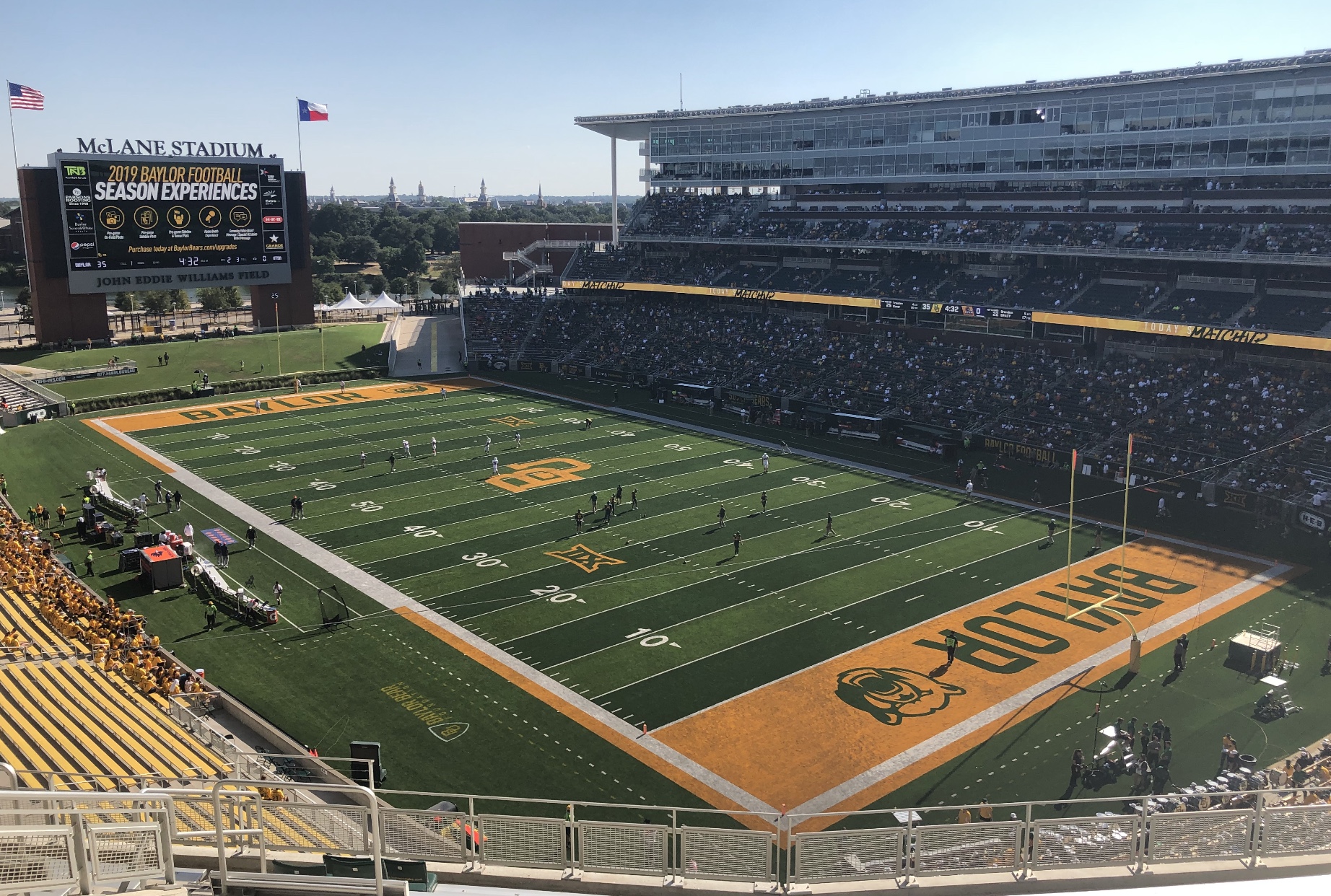 In this forth installment of this all conferences experience series, our game traveler, Mike (@CFBcampustour) will be answering questions focusing on the “best of” categories for each conference.

The next conference up is the Big 12. To date, he’s witnessed a game at six out of 10 Big 12 schools (some multiple times) . Here’s the breakdown:

What is the best Big 12 game you’ve witnessed?

Nov. 23, 2018 – No. 6 Oklahoma at No. 12 West Virginia. This regular season finale posed different scenarios for both teams. West Virginia needed a win to clinch a spot in the Big 12 title game. If it did, the opponent would be…Oklahoma again. The Sooners had already clinched their place in the championship game, so they did not have as much on the line. They did have College Football Playoff dreams of course and “you play to win the game…hello!” in my best Herm Edwards voice.

What made it interesting though was a win vs. West Virginia meant they faced Texas — the only team that had beat them all year. Would it be better to lose to West Virginia to avoid the Longhorns? While Sooner fans might have debated what they should do, the team proved they were out to win this game.

Without a doubt, this game had the most impressive offensive fireworks I’ve ever witnessed on a college football field. The stats were insane. Oklahoma had 668 yards of offense and somehow West Virginia topped that with 704. West Virginia quarterback Will Grier threw for 539 yards and four touchdowns.

He was matched by eventual Heisman Trophy winner and Oklahoma quarterback Kyler Murray. Murray finished with 364 yards passing, 114 yards rushing and four total touchdowns. Murray is also the fastest player I’ve ever seen in person. Watch him fly down the field on this designed quarterback run:

These offenses were so fierce that they amassed 101 points total (Oklahoma led 52-49) and there was still 11:10 to go in the fourth quarter. The fans were exhausted. They felt like they had been through the wringer, yet there was still nearly an entire quarter of football left to go. I honestly felt for the Mountaineer fans because they were in agony.

The first three quarters proved that both offenses were not slowing down and they continue to score every time they had the ball. Someone on defense had to actually make a play, otherwise it could have been 75-75 going to overtime. Finally, Oklahoma defensive end Kenneth Mann stepped up made the play to end this duel by sacking Grier and forcing a fumble. Linebacker Curtis Lofton scooped it up and ran 48 yards for the game-sealing touchdown. Though West Virginia added a late touchdown to get to within three, Oklahoma hung on for a 59-56 win.

The Sooners went on to avenge their regular season loss to Texas by beating them 39-27 in the Big 12 Championship and earned a spot in the College Football Playoff. West Virginia ended their season on a three-game losing streak and a loss to Syracuse in the Camping World Bowl. Regardless of how each teams ended their season, I’ll always Nov. 23, 2018 as one of the greatest offensive displays I’d ever seen.

McLane Stadium/Baylor. This is a very tough call. TCU’s Amon G. Carter Stadium and Oklahoma’s Gaylord Family-Oklahoma Memorial Stadium are unbelievable venues to watch a game. Both have undergone incredible transformations from their original footprint as well. Amon Carter was built in 1930 with a capacity of 22,000 and now seats 47,000-plus. Gaylord was built in 1925 with 16,000 seats and now holds over 86,000. Each of these is a must-see for college football fans.

My favorite however is McLane Stadium in Waco. I tend to favor older stadiums, but this beauty — built in 2014 — is pretty incredible. Set alongside the Brazos River and just off Interstate 35, McLane’s physical location is unparalleled among Big 12 schools. Plus, it’s on-campus and parking was fairly easy.

It has a crystal clear 47-foot by 107-foot high definition video board and a $22 million dollar shade canopy atop the upper deck, which provides shade for up to 55 percent of seats. The canopy is a huge deal. I went to a day game in September 2019 vs. UTSA and it was a scorcher. Fortunately, I was on the home side under the canopy and though it was hot, the shade and breeze made it tolerable.

Another cool feature of McLane Stadium is the placement of the student section. Before the game the “Baylor Line” — the student section — sprints across the field during pre-game and then finds their seats directly behind the opponent’s bench.  It’s a cool site to see a mob of students running across the field. Plus, I like how they are strategically placed to affect the sideline of Baylor’s opponent. Many stadiums dedicate those seats to season ticket holders, but Baylor uses this area to directly impact the game.

I can’t wait for another opportunity to see a game at McLane Stadium. Hopefully, it will be soon.