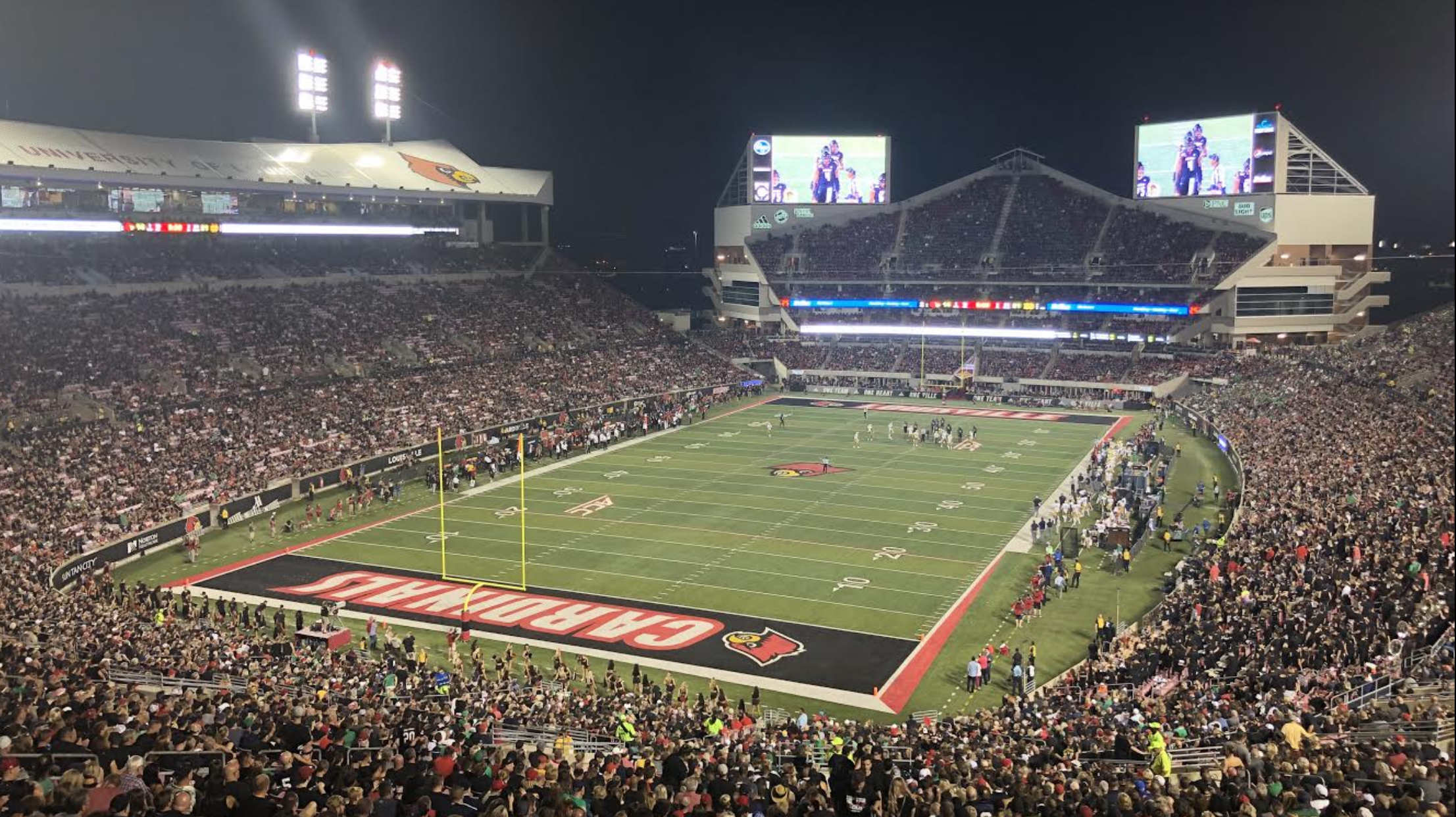 In this installment, we talk about collections, traveling buddies and lower levels of college football.

Q1: Do you collect anything at the games you travel to?

Yes, but not in the traditional sense. I know that (a) I’m a minimalist for the most part; and (b) if I can’t have EVERYTHING, then I don’t want to start. Should I collect team hats? Helmets? Jerseys? What about when they come out with new logos? Should I just hold on to my old version or update to the new one? How should I display my collection? By conference or in alphabetical order?

I never could figure it out, so I never started. Still, I did want to commemorate my visits somehow though. I came up with two things to “collect”.  First, I take a photo with the main campus statue/icon (here). Here’s an example with the Oregon Duck: 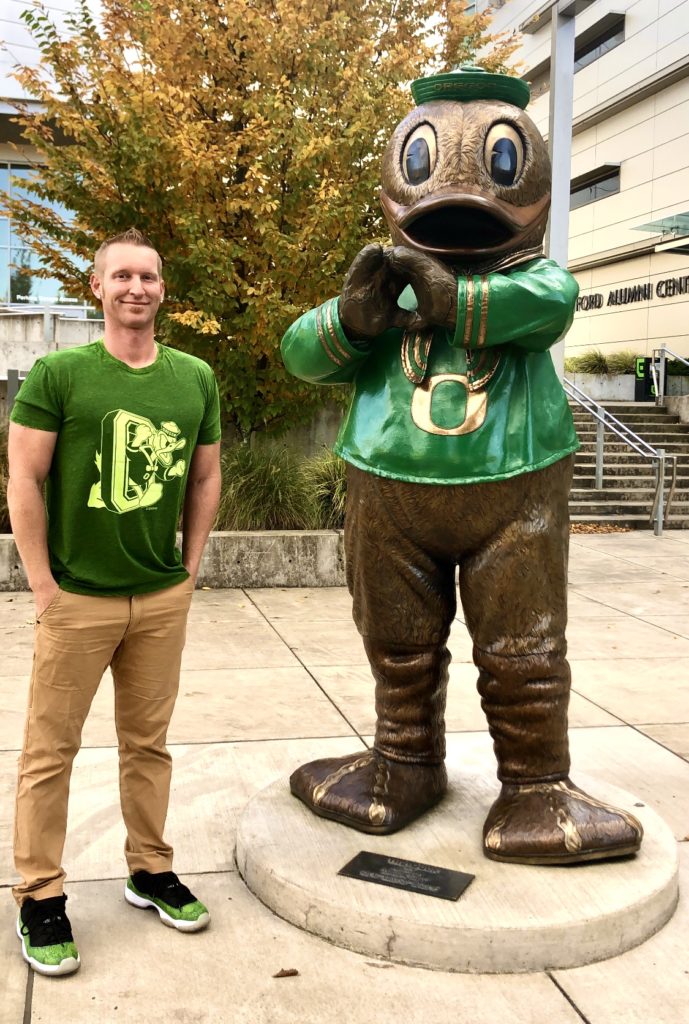 I now have a statue photo at all 130 FBS schools. What I do buy is a shirt from the campus bookstore for the photo, but not to keep. I like to show support for each program with my purchase then try to find a student/fan and give them the shirt after my photo. I’m not always successful in finding someone to give it to, but when I do, it makes me happy.

The other thing I collect is what I call my “Shot of the Night”. This is a photo I take during the game and tweet out. Here’s an example at Louisville: 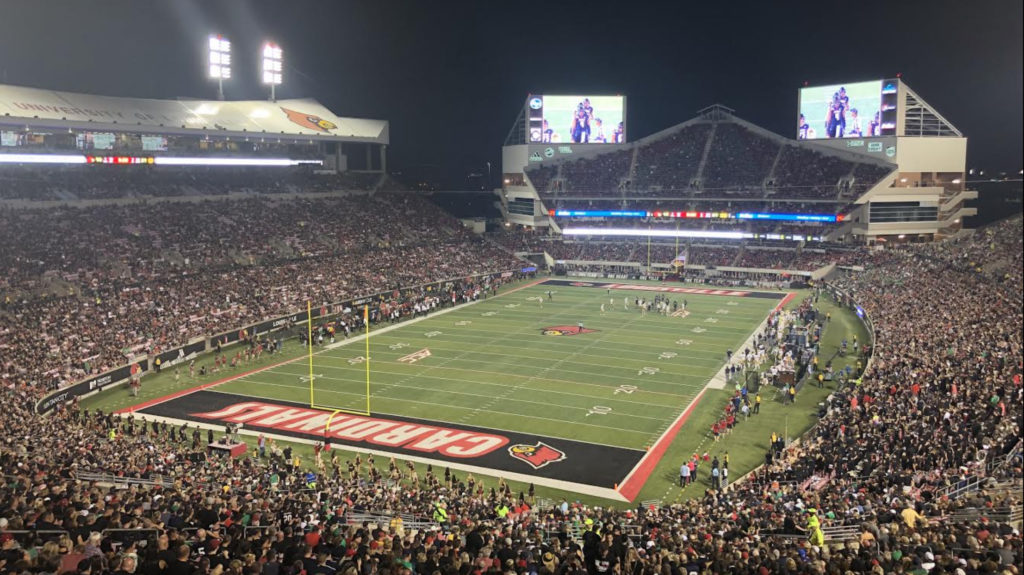 Prior to the game, I walk around stadium looking for the best photo angle to take this shot from. Then at some point during the game, I go back and take the shot. I have 88 game photos now and can’t wait to add to them in 2020. So the answer to this question is yes, I do collect something. Not in the traditional sense, however.

Q2:  Do you travel with friends/family, or solo?

This is a question I receive often. 98 percent of my trips have been solo. This is for a multitude of reasons.

First, I don’t know anyone with similar job flexibility as I have. I’m fortunate to work for a company that shows me some leniency during the fall. They are aware of how much game traveling means to me and I try to put in extra hours during the offseason to compensate for any missed time.  I can also do work on my laptop during the season. I can work on airplanes, in airport terminals, coffee shops, student unions, etc.

Second, most people don’t want to travel like I do. I sarcastically refer to my methods as the “glamour life”, because everything in between the actual games is far from glamorous. For instance, I always take the earliest flights, as they are usually the cheapest. I never stay at hotels and either sleep in my rental car, the airport terminal or on the plane the next morning. It’s not exactly how most people envision a vacation.

I have had my family join me a couple times. My dad played college football and we’ve gone to games (Fresno State in 2018 and California in 2019). My brother went to those two games as well and also joined me on a Thanksgiving trip last year. We went to the Egg Bowl in Starkville on Thanksgiving Day, Virginia Tech-Virginia on Friday and Middle Tennessee State-Western Kentucky on Saturday.

After the Western Kentucky game, we caught a Vanderbilt basketball game back in Nashville. He was so tired from the crazy travel schedule, though, that he went to the top of the bleachers and took a nap.

I’m definitely open to traveling with people in the future though. I even have the Southwest Airlines Companion Pass that allows me to bring someone with me for free wherever I fly. Now, I just need the companion! Hopefully, I’ll meet someone who shares a similar enthusiasm for travel and adventure. Until then, I’ll continue to coordinate schedules with fellow game travelers and meet up at games across the country.

Q3: Have you visited FCS/DII/DIII/NAIA schools?

Yes! As I mentioned earlier, I have started going to FCS playoff games during FBS bowl season. I saw Montana play at Weber State in the snow and it was a blast. In 2019, I also went to a couple regular season FCS games. I’ve gone to partial games at Georgetown, Norfolk State and Virginia Military Institute prior to my main Saturday night FBS games.

In September, I went to Pocatello, Idaho to see Idaho State’s home opener vs. Western Colorado. It was on a Thursday night when no other FBS game was being played. I had a great time there. Holt Arena is the oldest dome stadium in college football and the people in the athletic department were great. I was allowed to go on the field during the day and toss the football around too. Idaho State was extremely accommodating and you could sense how much the team meant to the town.

I really enjoyed these games, especially the DII title game. West Florida defeated Minnesota State in a 48-40 shootout. It was one of the most exciting games all season. I would like to go to more games, but the problem with FCS/DII/DIII/NAIA is that it is almost exclusively played on Saturday. So when you have to decide whether to see Florida State or Florida A&M in Tallahassee, you rarely choose the FCS game.

I am scoping out destinations for the future though. The 2020 DIII Championship is being playing in Canton, Ohio at Tom Benson Hall of Fame Stadium. I’d much rather see a DIII title game over a NFL preseason game as my first experience there. I want to see Ivy League games at each school.

I’ve been to Harvard Stadium and Pennsylvania’s Franklin Field during the offseason. Talk about historically significant venues. I’ve also been to Eddie Robinson Stadium in Louisiana and would love to catch a Grambling-Southern game there. I’d like to familiarize myself with top NAIA schools as well.

This is why college football is so great. The possibilities are limitless. It’s not just 32 NFL teams playing each other over and over. It’s 130 FBS schools, FCS, DII, DIII and NAIA. Seriously, how could anyone prefer the NFL over college football? Someone please explain that to me, because I honestly don’t get it.