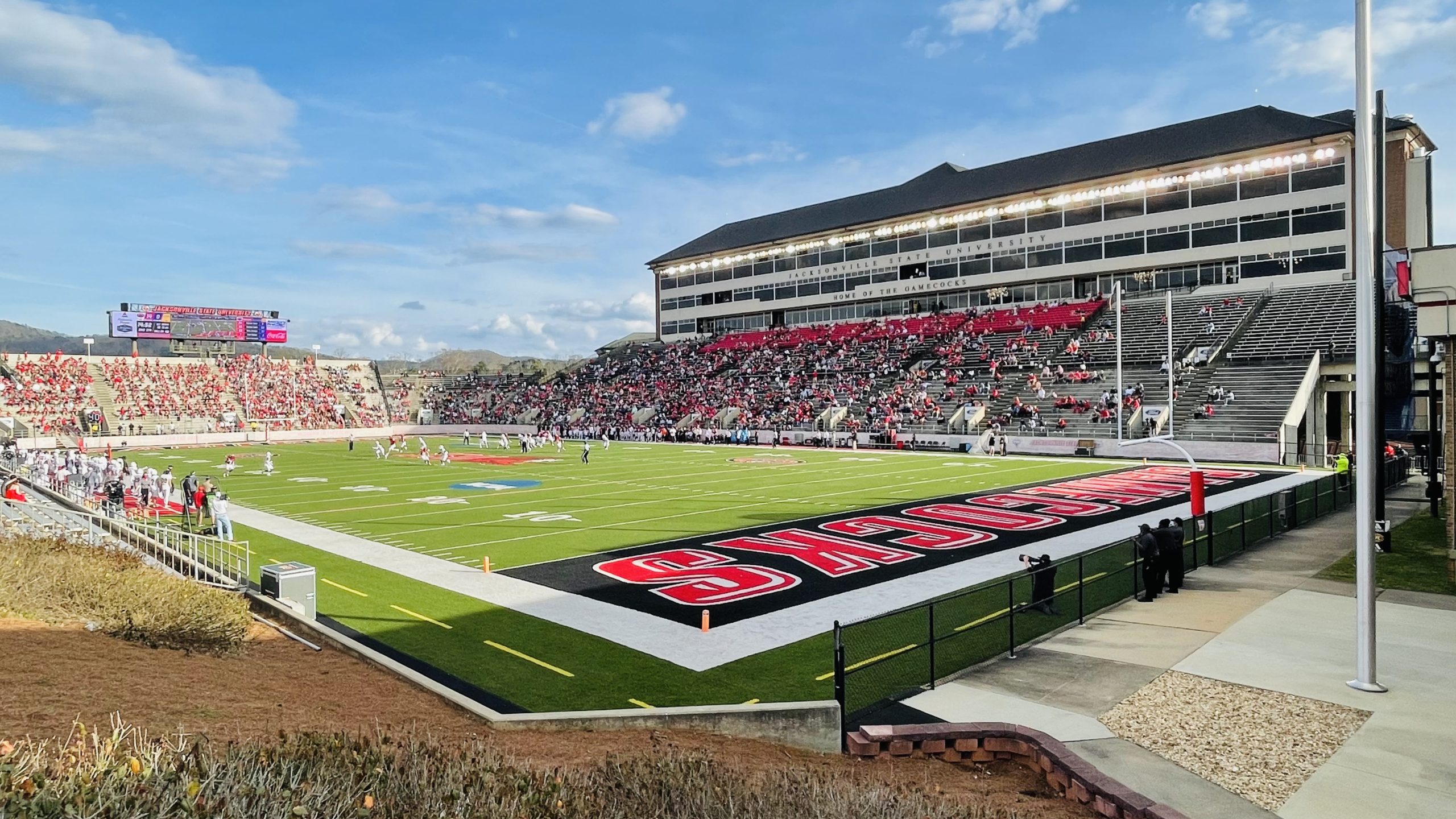 The beauty of the 2021 FCS spring season is not just that we have meaningful college football during a time period where it has never happened before.

It’s that the FCS had the foresight to schedule games throughout the weekend, not only on Saturdays. Imagine my excitement when I saw that I could attend three games in three days, all within driving distance of each other. It was a dream come true!

Checking Out the New Digs

Game No. 1 took place in Montgomery, Ala. as the Southwestern Athletic Conference had the FCS stage all to itself. The defending SWAC West champion Southern Jaguars were in town to square off with the home-standing Alabama State Hornets.

The site of the game was New ASU Stadium, which is my favorite SWAC stadium. This place is gorgeous! Check it out: 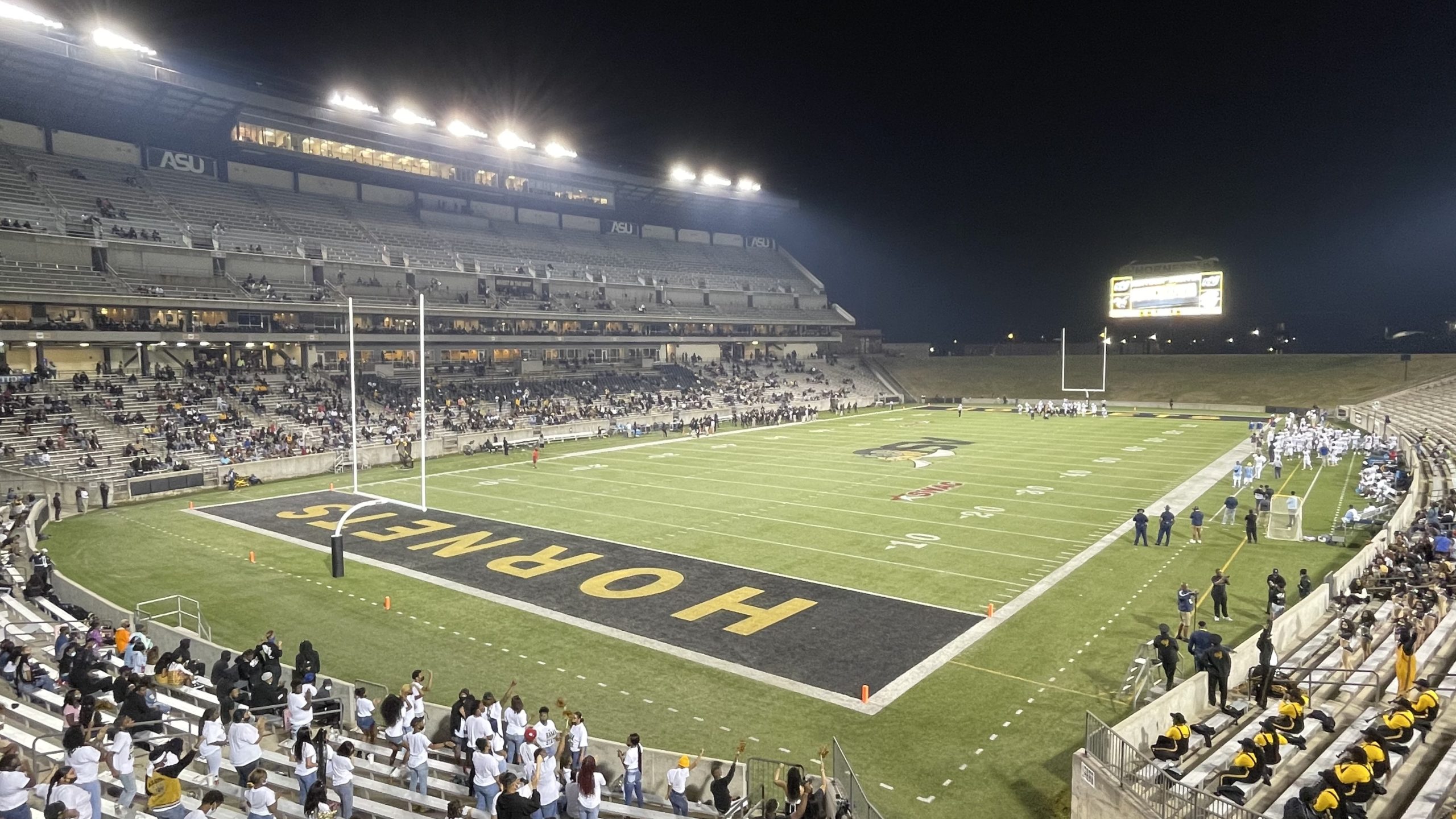 Built in 2012 and seating 26,500 fans, its construction finally provided Alabama State an on-campus venue. Prior to 2012, the Hornets played at the nearly 100-year-old Cramton Bowl, which more than a mile away. What’s unique about it was that it was built to expand to 55,000 seats in the future if/when necessary.

The game itself was close throughout. Both teams had exactly 274 yards of offense and three turnovers each. The Hornets controlled the tempo of the game however, possessing the ball for 36:16 with 22 first downs — nearly twice that of Southern.

Despite this, Southern held a 24-21 lead late in the fourth quarter. Alabama State drove down the field into position for a game-tying field goal attempt with just four seconds remaining. Unfortunately for Alabama State, the kick was no good and it fell at home, 24-21.

It was a great drama-filled game and excellent way to start the weekend.

Macon My Way Down South

A 3-hour drive east over the state border brought me to Macon, Ga. and Mercer University. The Bears were playing their home opener vs. fellow Southern Conference rival The Citadel.  There was a buzz on campus as football, baseball and softball games were all going at the same time.

All three were literally were being played right next to each other. It was quite a sight to see.

The football game was held at Five Star Stadium. Built in 2013 with seats for 10,200 fans, it’s visually appealing with its brick facade and huge video board: 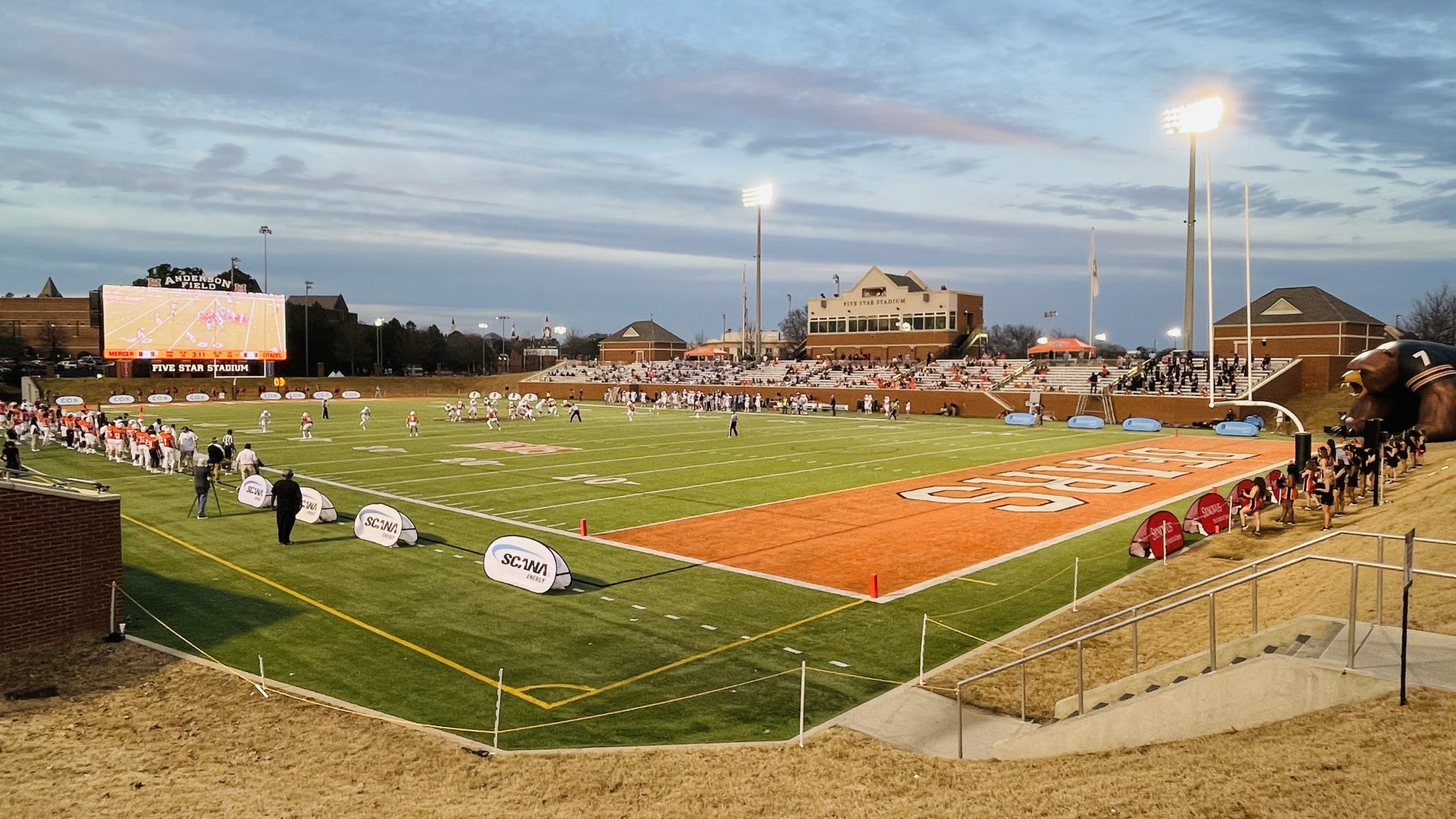 There is not a bad seat in the house and it’s a perfect high-quality FCS facility.

The game started off with a bang, as the home team jumped out to a 28-0 lead midway through the second quarter. Everything was going Mercer’s way.  It looked like a blowout, but The Citadel mounted a comeback to get within one score.

But the Bears closed the show by turning a Bulldog onside kickoff attempt into a 45-yard touchdown return by wide receiver Ethan Dirrim.

It was a very entertaining game and a fun day in Macon for sure.

h2>We Want (To Go Back to Ala)Bama!
Game No. 3 was back in Alabama in the city of Jacksonville. The Ohio Valley Conference is playing primarily on Sundays, which was quite the convenience for your game traveler.

The past couple years we’ve seen failed attempts by semipro leagues (AAF and XFL) to try to occupy Sunday time slots when the NFL is not playing. The demand is obviously there from football fans and the OVC decided to capitalize on it. Very smart.

Like facilities at Alabama State and Mercer, JSU Stadium is a gem. I tweeted a stadium photo during the game and it received a strong response:

Shot of the day – JSU Stadium

Like I said in the tweet, the tired narrative that FCS is an inferior product has to go. JSU Stadium is incredible and definitely a must-see for college football fans.

As for the action on the field, the score was close into the final quarter though the Gamecocks had led the entire way to that point. Up 17-10, quarterback Dave Russell III hit Zion Webb for a touchdown. With 3:43 remaining, kicker Alen Karajuc put the game out of reach with a 23-yard field goal to make it a 3-score game.

While I had fun at all three games, some of the best times I had over the weekend was interacting with fans. From Montgomery to Macon to Jacksonville, FCS enthusiasts want you to see how exciting their brand of football truly is.

I was treated very well everywhere I went, but especially in Jacksonville. JSU Boomtown tailgaters reached out to me prior to me prior to my visit and they welcomed me with open arms when I arrived. They shared food, drinks, stories, etc. with me and it was truly an unforgettable experience.

Here’s a picture we snapped before kickoff: 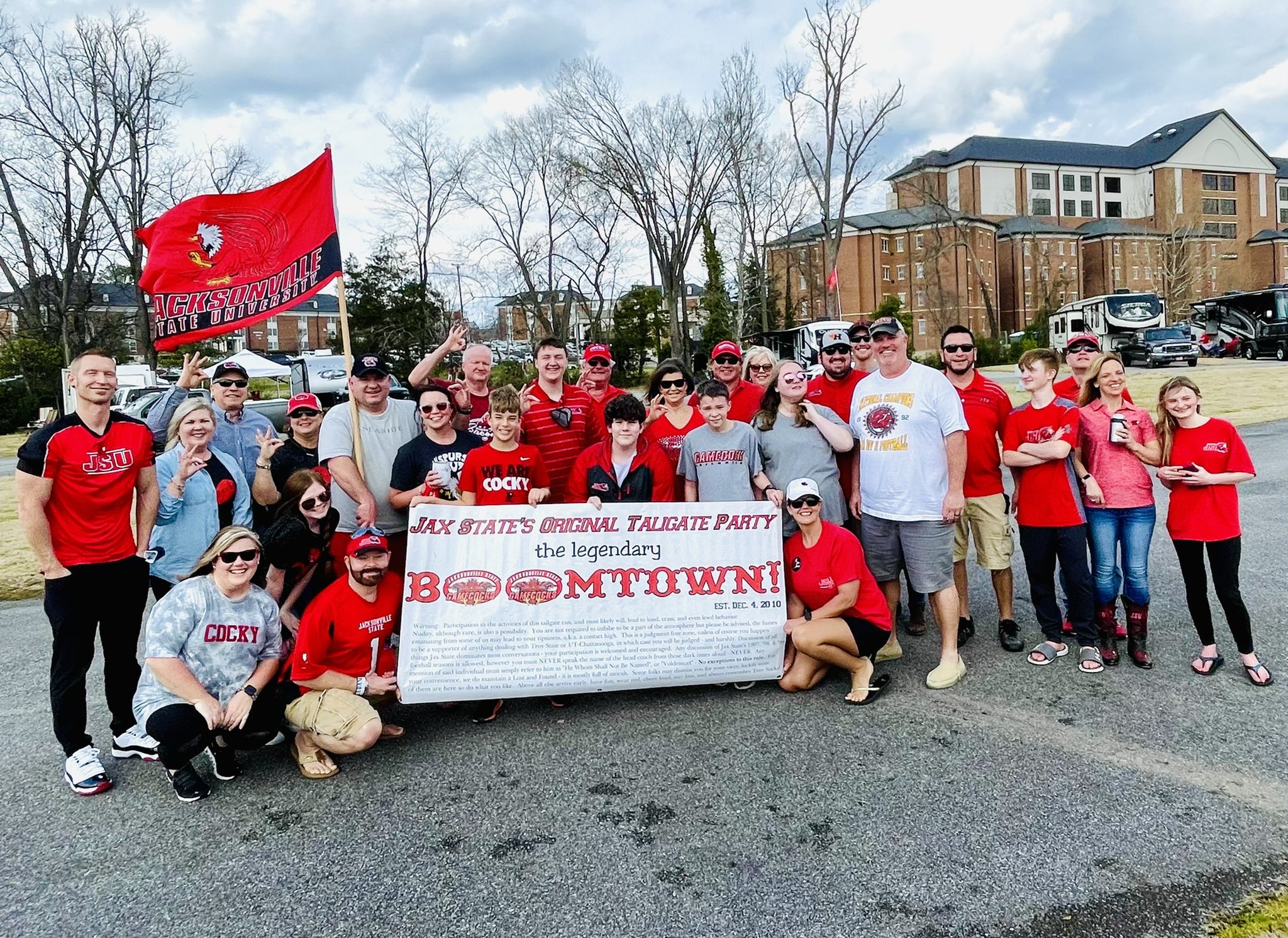 I am thoroughly enjoying my travels for this unique spring season and the best part is that we’re only in Week 2!! For Week 3, I’ll be back in North Dakota again for a Thursday night game. On Saturday I’ll hitting two games, with a noon ET kick at Grambling State and 6 p.m. ET kick at Northwestern State.

I’ll take a short flight to St Louis on Sunday morning to see Southeast Missouri to cap off the trip.

I hope you’ll continue to follow my tour at @CFBcampustour, as well as @CFBHome and @FifthQuarterInc. See you again soon from the Alerus Center in Grand Forks!