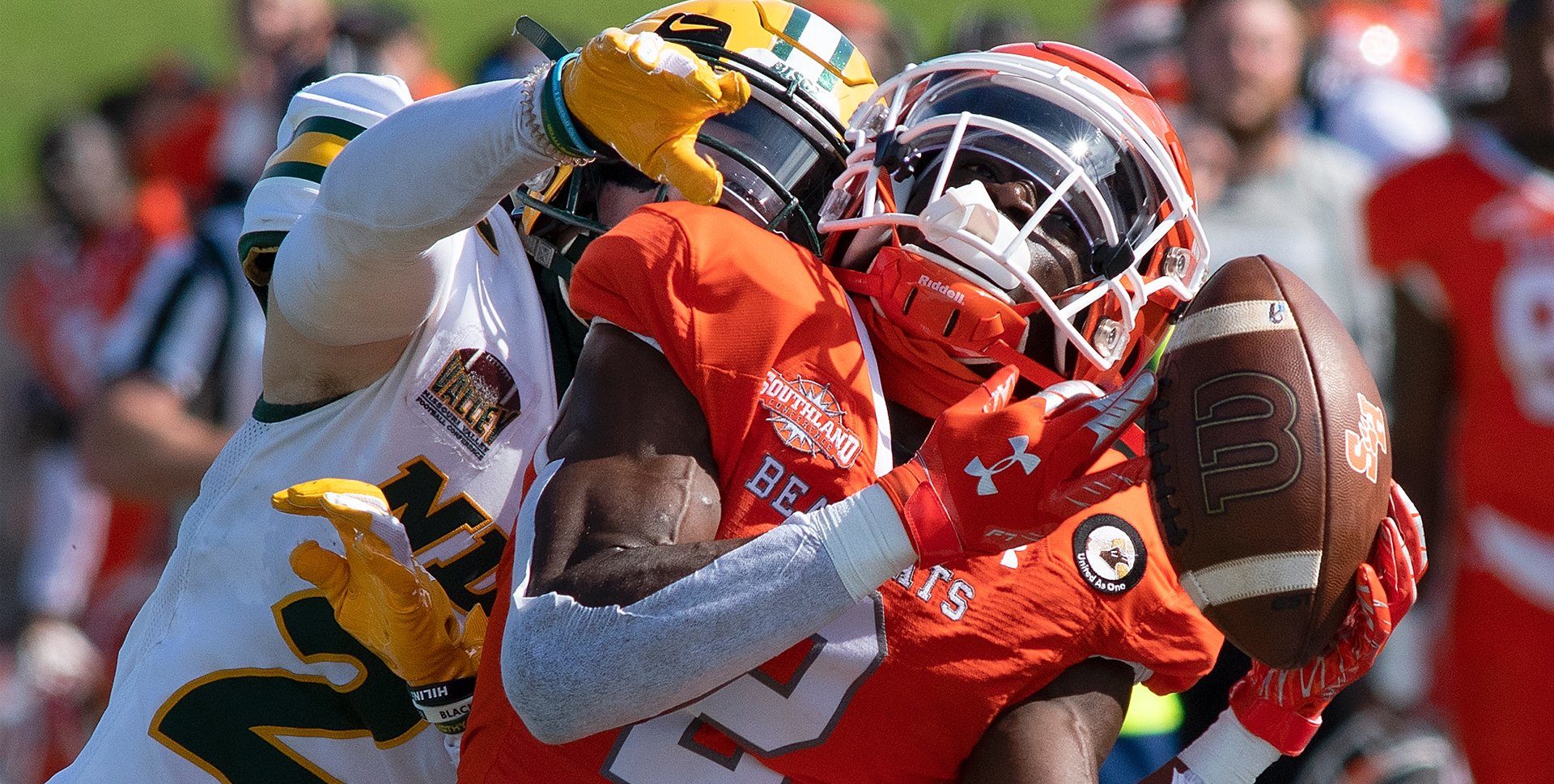 The 2020 college football season kicked off over nine months ago.

The Alabama Crimson Tide were crowned champions of college football a solid five months ago. Heck, even the NAIA crowned a champion early this week!

This 2020 season has spanned almost a full calendar year, and yet, we’re determining an FCS champion to put the cherry on top of it in mid-May during the midst of college baseball season. Weird stuff.

Nonetheless, the uncertain 2020 season that really took place in 2021 for the FCS will come to a close on Sunday afternoon. Two familiar, yet unfamiliar faces to the college football landscape will square off for the right to be deemed the 2020 FCS Champions.

The No. 2 overall seed Sam Houston State Bearkats (9-0) will take on the No. 1 overall seed South Dakota State Jackrabbits (8-1) at Toyota Stadium in Frisco, TX with the winner set to take home their first ever FCS national championship.

As mentioned, it’s not uncommon to see these two teams near the top of the FCS.

But where’s the mighty North Dakota State Bison? Well, now-San Francisco 49ers quarterback Trey Lance is gone. The James Madison Dukes were just bounced by Sam Houston State in the semifinals. Those two teams have formalized the most recent two FCS title games, with the Bison winning 8 of the last 9 championships. Of course, the Dukes took down North Dakota State in the lone year missing from that run, so that hasn’t been much parity in the FCS. It’s refreshing to see two new teams on the field.

Both squads are always close, but it’s the first national championship game appearance for South Dakota State, and only the third by Sam Houston State – who fell to the Bison both times. The Bearkats technically have a national title under their belt, but it came at the NAIA level all the way back in 1964.

So we’re set up for a new look title game, and one that should go down to the final possession.

Let’s start out with the No. 1 overall seed.

The Jackrabbits have been around for a while. Heck, they even hosted ESPN’s College Gameday in Brookings for their 2019 game against North Dakota State. But this season has been unprecedented.

After falling to North Dakota in just the second game of the season by a score of 28-17, the Jacks ran the table in the regular season, taking care of their final four opponents in the powerhouse Missouri Valley conference to finish 5-1 and earn the No. 1 overall seed.

An opening round 31-3 victory over Holy Cross was an anti-climatic first step in South Dakota State’s quest for the title. The follow-up made head coach John Stiegelmeier sweat a little more on the sidelines, as the Jackrabbits used a fourth quarter rally to defeat Southern Illinois 31-26 in the quarterfinals. Stiegelmeier’s team then rolled past Delaware with relative ease in a 33-3 victory in Brookings to clinch their plane ticket to Frisco and their spot in the FCS Championship Game.

True freshman quarterback Mark Gronowski has willed the Jacks throughout the shortened season. The 6’3 200-pounder has gone 108/147, totaling 1,568 yards in the air and adding 15 touchdowns to just three interceptions. The freshman phenom has also averaged 8.4 yards per completion.

Isaiah Davis and Pierre Strong Jr. are a nice duo on the ground for South Dakota State, while Jaxon Janke serves as the primary target for Gronowksi, totaling 438 yards and six touchdowns.

Defensively, the Jackrabbits are elite. Giving up six points in two playoff games is no joke. They’ll have to continue that pace against a fearless Sam Houston State offense.

Speaking of the Bearkats, how’d they get here?

The Southland Conference champions have yet to lose in game in their 2020 campaign. They eased through the regular season after putting up a combined 146 points in their first three games. The playoffs, though, have been different. You might wonder if Bearkat fans have any nails left to bite.

They’ve only won their three playoff matchups by a combined 13 points – but look at who they had to get through to get here. A 21-15 opening round defeat of Monmouth secured a quarterfinal date with North Dakota State. The Bearkats ended the reign of the three-time defending champions in a 24-20 victory before coming back from a 24-3 halftime deficit to take down James Madison, 38-35 at Bowers Stadium in Huntsville.

Quarterback Eric Schmid has had a phenomenal season in the dazzling Bearkat offense. He’s totaled nearly 2,600 yards in the air, while adding 17 touchdown passes and averaging 9.0 yards per completion. Those numbers are off the charts. The concern though, is the INTs – Schmid has been picked off nine times. The matchup of the elite Bearkat offense against an elite Jackrabbit defense makes this an exciting matchup.

Sam Houston State averages 47.8 points per game. Defensively, they can allow points. But if they get in a track meet on the offensive side of the ball, they’re hard to beat.

We’re in for a fun Sunday in Frisco.