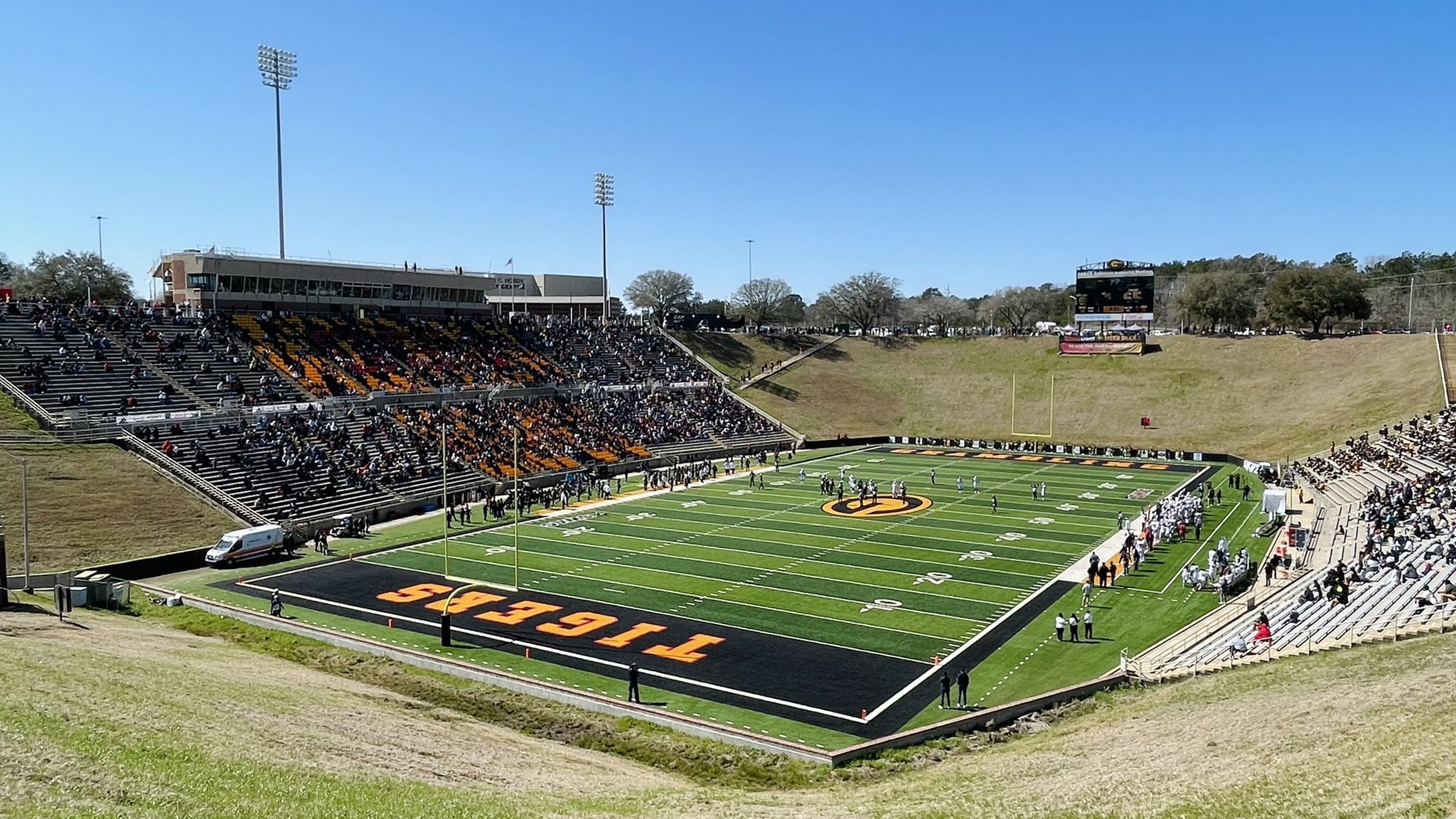 In Weeks 1 and 2 of the 2021 FCS spring season, I was able to see three games in three days each weekend.

What could possibly top that?

The scheduling gods continue to provide opportunities to see games on multiple days and I have been fortunate enough to take advantage of it.

Prior to Week 1, I had never been to Grand Forks, North Dakota in my life. Now in Week 3, I made my second trip in 13 days! Even though the game was not originally on my schedule, I had to add it because: (a) I had such a great time in Week 1; and (b) North Dakota is the hottest team in FCS. So it was wheels up back to North Dakota for Thursday night match-up vs. South Dakota.

Alerus Center, I Missed You So…

North Dakota, who went from unranked to No. 4 in the nation since the season began, plays at the Alerus Center — a beautiful indoor facility built in 2001 which holds 21,000 fans. Obviously, there are less with current COVID-19 attendance restrictions, but the facility is still sparkling as ever: 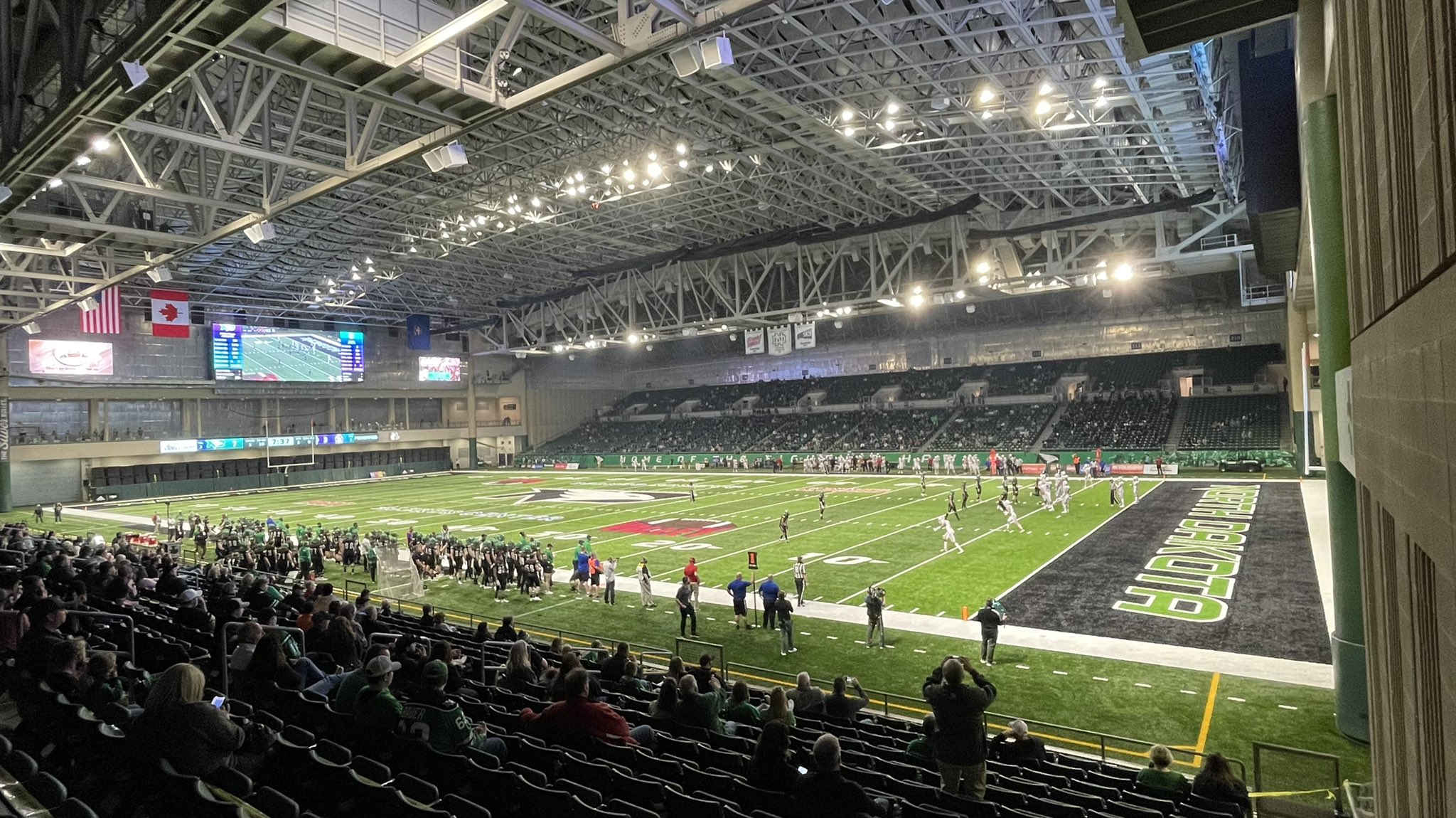 The Fighting Hawks had the stage to themselves, as the only game on the FCS schedule. They showcased their talents for the nation to see. After a tight 7-3 first half, North Dakota blew the game open in the third quarter.

Otis Weah, a redshirt sophomore, went off in the third quarter. Within a 6-minute span, Weah scored touchdowns of 18 and five yards. On the night, Weah ran for 163 yards on a whopping 10.2 yards per carry. It was a breakout game for the Moorhead, Minn. native.

North Dakota went on to win 21-10 over South Dakota. The box score revealed nearly a perfect night. The Fighting Hawks finished with 489 total yards and great balance — 240 passing and 249 rushing.

North Dakota converted 11 of 16 third downs, committed no penalties and possessed the ball for more than 35 minutes. It was an incredible night in Grand Forks and home to a potential FCS national champion.

After spending Friday visiting stadiums in Minnesota, I flew into Louisiana for a Saturday doubleheader. First was a noon ET kickoff between Jackson State and Grambling State.

Jackson State made national headlines this offseason by hiring Pro Football Hall of Famer, Deion Sanders. The Tigers won their opener vs. Edward Waters College 53-0, but this would be their first Southwestern Athletic Conference game.

Grambling is one of the premiere FCS destinations in the country. It is home to the legendary coach Eddie Robinson, who retired with the most wins in college football history (408). There is an amazing museum in his honor on campus and the stadium is named after him as well. Eddie Robinson Stadium personifies the term “bucket list” stadium and it was a surreal feeling to finally see a game there.

Here’s my “shot of the day” picture:

The game itself, was a roller coaster to say the least. Grambling jumped out to a 14-7 first-quarter lead, but Jackson State responded with 20 unanswered points in the second quarter to lead 27-14 at halftime. Grambling whittled down the Jackson State advantage and got within five points late.

With 1:04 remaining, Grambling was one yard from the lead and in prime position for victory. It instead gave the game to Jackson State. Aubrey Miller forced a Keilon Elder fumble and Keonte Hampton secured the recovery and the win for Jackson State. Final score: Jackson State 33, Grambling 28.

It was a wild game for sure and only the first one of the day!

I made the 80-minute drive following the game to Natchitoches to see Northwestern State host Nicholls. It was the season opener for Nicholls and a tough one at that vs. the No. 7 team in FCS.

Northwestern State plays at Turpin Stadium. It was built in 1975 and seats 15,971 fans. It was my first visit to Turpin Stadium and I explored the entire venue. Here’s a look at it from ground level: 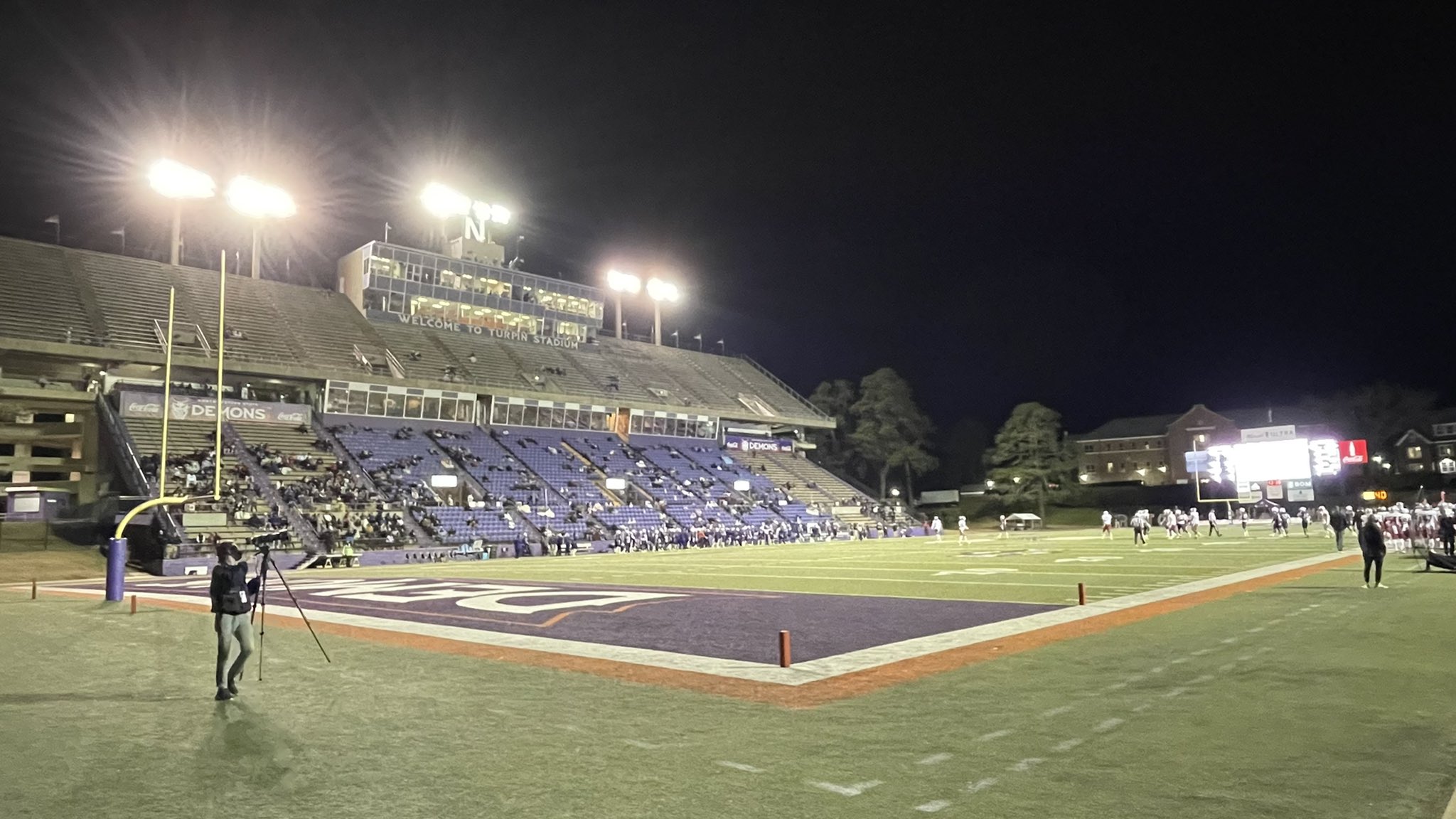 It was a perfect night for football, with comfortable weather and a surprisingly competitive game. Nicholls dominated all night on the stat sheet, but couldn’t shake the Demons. The Colonels amassed 545 yards compared to 304 for Northwestern State and 29 first downs to 12 for the Demons. Nicholls nearly doubled Northwestern State’s time of possession.

Two big Colonel turnovers kept Northwestern State in the game at 24-17. Nicholls extended its lead to 14 when Lindsey Scott found David Robinson Jr. for a 42-yard touchdown, but the Demons responded and cut it back to seven on a Gavin Landry 13-yard touchdown pass to Kaleb Fletcher.

Up 31-24 with 5:34 remaining, Nicholls came up clutch and iced the game with a drive that bled the clock down to triple zeroes. It was a valiant effort by Northwestern State, but the No. 7 Colonels escaped with a win and improved to 3-0 on the season.

Back to the Valley

Game No. 4 fell on a Sunday afternoon in Cape Girardeau, Missouri. The Ohio Valley Conference filled its schedule with nearly all Sunday games and I love it for that. On this day, the home Southeastern Missouri Redhawks faced the Murray State Racers.

Southeastern Missouri plays at historic Houck Stadium. Built in 1930, Houck Stadium is the oldest active venue in the OVC. Originally built with 5,240 seats, the north side bleachers were added in 1963 to bring its capacity to its current total of 11,015. Here’s a field level view: 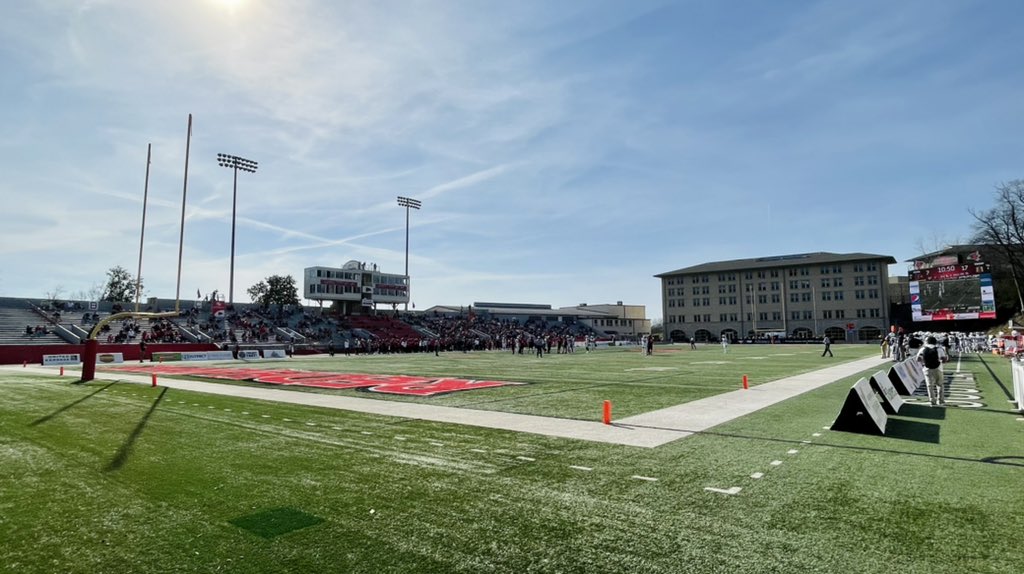 Like Northwestern State the previous day, this was the season opener for Southeastern Missouri. There was a good-sized crowd and they were treated to a see-saw battle. Murray State raced out to an early 17-7 first-quarter lead and neither team scored any points for the next two quarters.

Southeastern Missouri then exploded for two touchdowns in a 55-second span to seize a 21-17 fourth-quarter advantage. Zion Custis punched in a 1-yard touchdown, which was quickly followed by a 33-yard pick-six by Shabari Davis. Redhawk fans were going crazy and were looking for their team to close the show.

Unfortunately for them, Murray State quarterback Preston Rice had other ideas. He led the Racers on a 7-play, 51-yard drive and immediately took back the lead on his 3-yard touchdown run. Murray State held firm for the remaining 7-plus minutes and walked out of Cape Girardeau with a 24-21 victory.

The Tour Rages On

Each week keeps getting better and better with this unique FCS spring season. I’ll be hitting another three games this weekend, with two on Saturday and another on Sunday — a noon ET Saturday kickoff at McNeese followed by a 6 p.m. ET start at Southeastern Louisiana. I’ll take a quick Sunday morning flight to Tennessee and short drive to see Tennessee Tech in Cookeville.

You can continue to follow my travels at @CFBcampustour, as well as @CFBHome and @FifthQuarterInc.  I’ll see you again soon from Lake Charles, La.