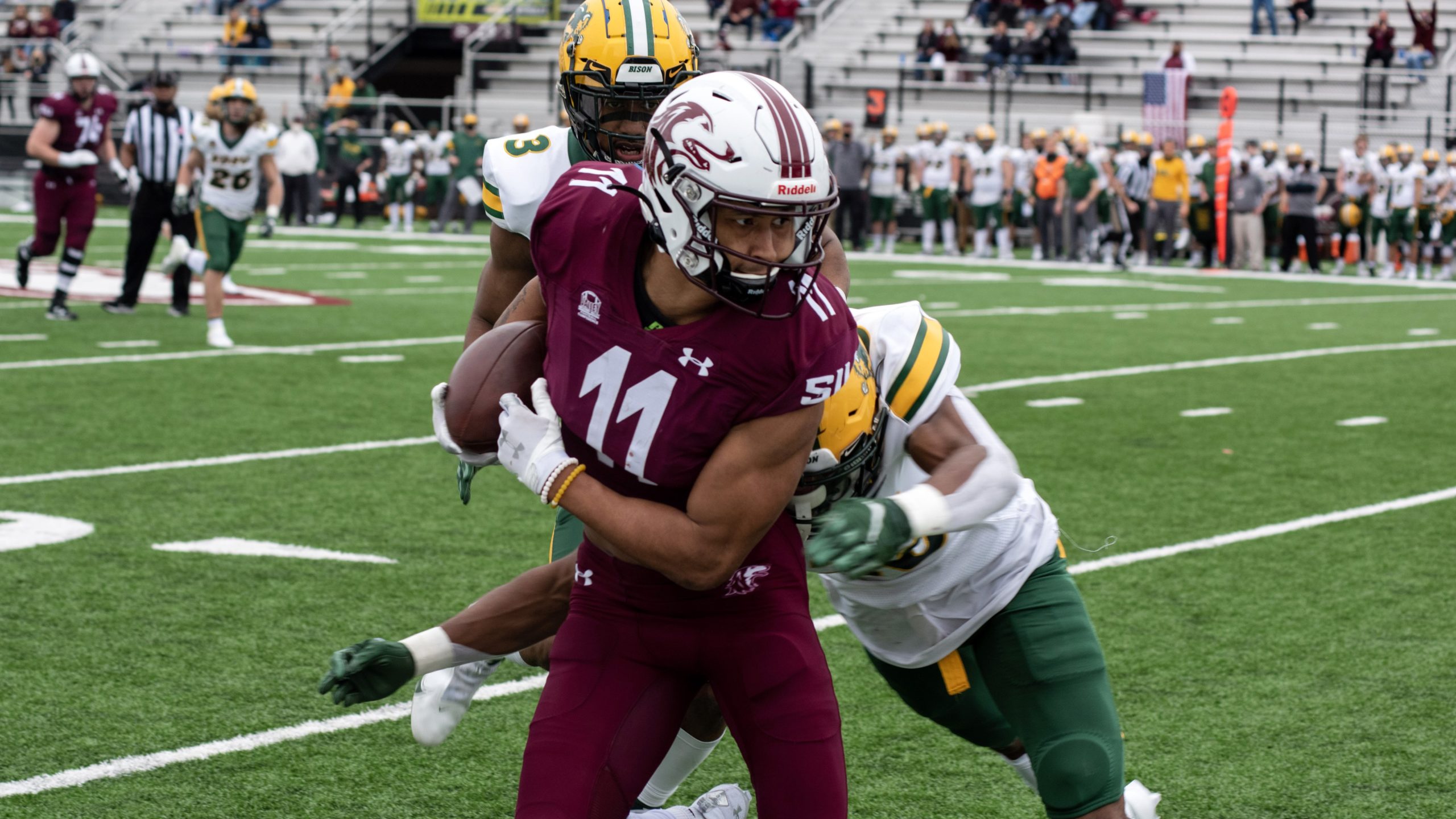 Well, would you look at that? The FBS season may be over. The Super Bowl may have been completed. But once again, we have football!

The COVID-19 pandemic may have forced these schools to postpone their seasons, but that just means they’re even more ready to play.

It shows too. We had a wild first full weekend of FCS football. Four top-10 teams went down. Five in the top 12 went down; what more could we ask for?

We now recognize those teams that contributed to a record-breaking weekend for the FCS. So with that, here is our first list of “FCS Teams of the Week.”

How about the VMI Keydets to kick us off?

Typically a team stuck in the bowels of the Southern Conference, VMI made headlines this week in the college football universe.

The Keydets took down the first of four top-10 teams by way of fellow SoCon foe and 10th-ranked Furman.

It was a defensive slugfest in Lexington, Va., as VMI came out on top 14-13 in a game that didn’t feature any scoring in the final period of play.

The Keydets were led by future Power 5 quarterback Reece Udinski, who has announced his intentions to transfer to Maryland to play for the Terrapins starting in fall 2021. The North Wales, Penn. native went 27-for-38, throwing for 248 yards and two touchdowns.

Those two touchdowns were the difference for VMI, as Scott Wachenheim’s defense shut down the Paladins’ offense en route to a top-10 victory at Foster Stadium.

It had to be a crazy week when a team that beat the 10th-ranked team finds itself at No. 4 on our list.

The South Dakota Coyotes are howling fairly loudly on this Monday afternoon as one of three Missouri Valley powerhouses went down this past weekend. This one, at the hands of the Coyotes.

South Dakota went on the road to Hancock Stadium in Normal, Ill. with plans of knocking off the seventh-ranked Illinois State Redbirds in the season opener for both squads. What happened was far from Normal, as the Coyotes did just that, taking down another top-10 team on Saturday afternoon.

South Dakota’s Carson Camp was outstanding behind center all afternoon long, totaling 221 yards while going 20-for-35 passing with two touchdowns. The Coyote offense was good; the defense was spectacular.

The 1,800 fans inside the building were stunned as the unranked Coyotes left Normal with a shocking upset of No. 7 Illinois State, 27-20.

We’re in for a wild ride in the MVC this spring season.

The Missouri Valley is going to be a fun conference to watch this spring season. Chaos!

That’s exactly what this past weekend displayed, as yet another top-10 program in the MVC went down. This one is a little less shocking though.

Nonetheless, it was still a great win for No. 14 North Dakota. The Fighting Hawks took down third-ranked South Dakota State, 28-17, and outscored the Jackrabbits 21-3 in the second half.

North Dakota quarterback Tommy Schuster had a fine day behind center, going 20-for-32 passing with 184 yards and a touchdown to add to the stat sheet.

The defense was what really was the difference in this one though for the Fighting Hawks. It clamped down big time, forcing three South Dakota State turnovers and totaling three sacks on the afternoon.

Taliback Otis Weah was the deciding factor, manufacturing two touchdowns for North Dakota, including one from 40 yards out to put the game away in the fourth quarter at the Alerus Center in Grand Forks.

The Fighting Hawks may have already been in the news last week for a referee that accidentally left his microphone on, but the team now makes the headlines, as they’ll be poised to crawl into this week’s new top 25.

The longest winning streak in FCS history has come to a screeching halt.

That’s probably not what the top-ranked North Dakota State Bison thought would happen on Saturday prior to when they stepped on the field against unranked Southern Illinois. Coming in, North Dakota State had won 39 games in a row.

The Salukis weren’t intimidated by one of the greatest dynasties in college football history, as they routed the Trey Lance-less Bison 38-14 at Saluki Stadium in Carbondale, Ill.

Southern Illinois was led by newly named Missouri Valley Offensive Player of the Week and quarterback Nic Baker. The sophomore from Rochester, Ill. went 17-for-23, throwing for 254 yards and a touchdown.

Avante’ Cox added seven receptions for 138 yards for the Salukis, while both Romeir Elliott and Javon Williams Jr. added a pair of scores on the ground. Southern Illinois used 443 yards of total offense, 25 first downs, and two turnovers to upset the mighty Bison on their home turf.

This is a huge win for the 35-year-old, fifth-year head coach Nick Hill as his team got to celebrate one of the biggest upsets in program history in front of 2,400 fans.

The Salukis may not be unranked any more. They now find themselves 2-1 with their lone loss on the young season to aforementioned North Dakota.