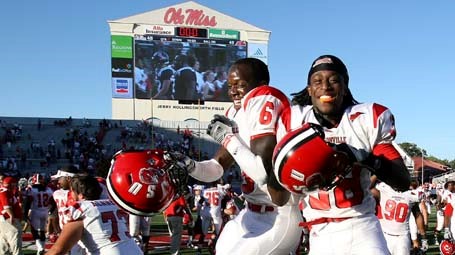 Florida State will play its lone non-conference game of the season on Saturday as Jacksonville State comes to town.

Under first-year head coach Mike Norvell, FSU is off to an 0-2 start. But if the Seminoles think Jacksonville State will be an easy win, they probably shouldn’t.

FSU should look no further than its last meeting with the Gamecocks to know that. As is the case this season, FSU was coming off a loss to Miami in 2009 when the Gamecocks came to Doak Campbell Stadium.

Ty Jones scored for FSU with 35 seconds remaining and Kevin McNeil sealed the 19-9 win by returning a Perrilloux fumble for a score on the very next play. Although FSU survived, Jacksonville State made things very difficult on the Seminoles.

The Gamecocks Break Through

With 18 seconds left in regulation and Ole Miss leading 34-26, Jacksonville State’s Marques Ivory found Alan Bonner for a 19-yard touchdown. The Gamecocks converted the 2-point conversion to draw even and force overtime.

The teams traded touchdowns in the first overtime. After Ole Miss scored to take a 48-41 lead in the second overtime, Coty Blanchard found Kevyn Cooper for a 30-yard touchdown on 4th-and-15 to keep Jacksonville State alive. Blanchard then found Calvin Middleton in the back of the end zone for the winning 2-point try.

Although Jacksonville State has been unable to beat another Power 5 team, it has hung tough with others. In 2012, the Gamecocks led No. 12 Arkansas 14-7 in the second quarter and were within 11 early in the third of a 49-24 win for the Razorbacks. Against No. 6 Florida later that season, Jacksonville State trailed just 10-0 at halftime in a 23-0 loss.

Auburn was less than two years removed from an SEC title and an appearance in the BCS National Championship when the Gamecocks came to Jordan-Hare Stadium on Sept. 12, 2005 and put the fear of God into the No. 6 Tigers. Up 20-13 with less than a minute to play, Jacksonville State needed just one stop to do the unthinkable.

Auburn scored with 39 seconds left when Jeremy Johnson hit Melvin Ray for the 10-yard touchdown. Peyton Barber scored in overtime to put Auburn ahead for good in a 27-20 win. Jacksonville State reached the 5-yard-line on its possession, but a 16-yard sack led to a turnover on downs.

Jacksonville State was moderately competitive against LSU in 2017 and Georgia Tech in 2018. The Gamecocks had second-quarter leads in both of those games, but lost 34-13 and 37-10, respectively.

An an FCS program, Jacksonville State has had plenty of success over the last decade. A 6-6 finish to last season ended a streak of 16 straight winning seasons.

From 2013 to 2018, the Gamecocks made the FCS playoffs each season. Jacksonville State reached the national championship game in 2015, but was easily defeated by North Dakota State.

Although an FCS team, Jacksonville State has little to be ashamed of as a program. If Saturday’s contest at Doak Campbell Stadium gets a bit uncomfortable for Florida State fans, it’s par for the course.